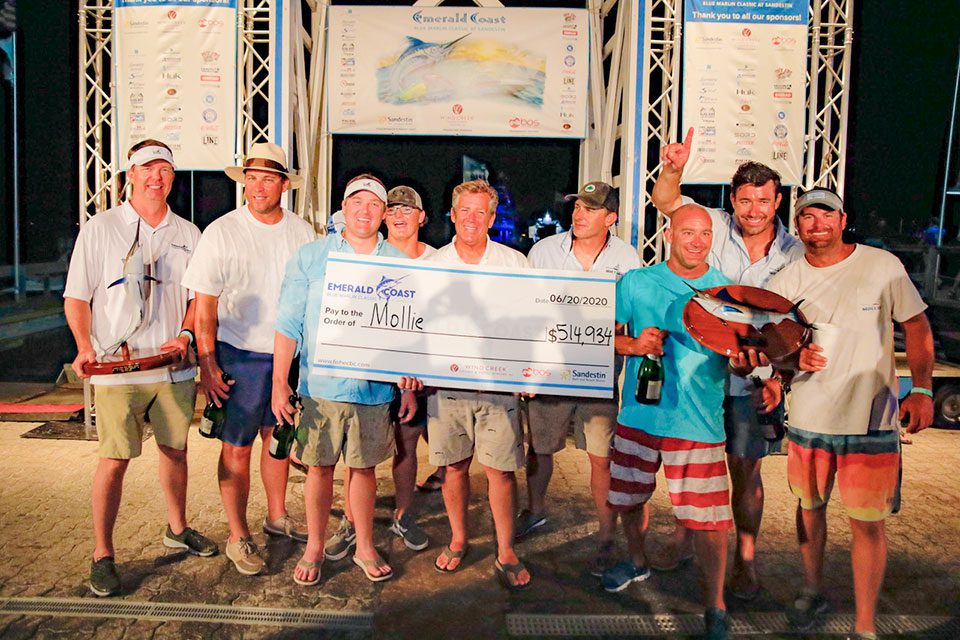 Miramar Beach, Florida – With some of the best teams in sport-fishing vying for $1.747 million in cash prizes, the 2020 Emerald Coast Blue Marlin Classic was destined to feature stiff competition. And it did. By the time the last boats had weighed in, however, it came down to a truism in sports—the home team always has a slight advantage. So after winning all the other major tournaments in the Gulf, it was Mollie, a Destin-based G&S custom sport-fisher, that claimed the top prize.

“We are very fortunate to do something we love for a living,” Capt. Jeff Shoults said afterwards. “The good Lord blessed me and my crew and allowed us to catch these fish. We had an outstanding trip. Four out of the five anglers aboard caught blue marlin and to win our hometown tournament is pretty awesome.”

Panhandler, a 54 Hatteras owned by Tim O’Brien and run by Capt. Travis Gill, was the second-place team with a blue that weighed 601 pounds. With optionals, that fish was worth $182,274 for the Pensacola team.

Charles “Charlie” Thomas III and his crew aboard Fins Up, a 54 Bertram based in Orange Beach, earned third-place honors with a 553.3-pound marlin that was weighed in Friday night. Capt. JJ English and the team earned $57,282 for their efforts.

In an unfortunate twist of fate, Liquid Apple, a 68 Viking owned by Gary Applewhite and run by Capt. Ron Woodruff, didn’t have a fish that got away story. They actually boated their marlin, only it was hand-lined after the fish became tail-wrapped and died. Since it wasn’t landed on conventional tackle, angler Blake Applewhite and the team disqualified themselves. A courtesy check at the scales showed a measurement of 121.5 inches long with a girth of 66 inches. The weight of 668.8 pounds would have topped the leaderboard had it been caught according to tournament rules. 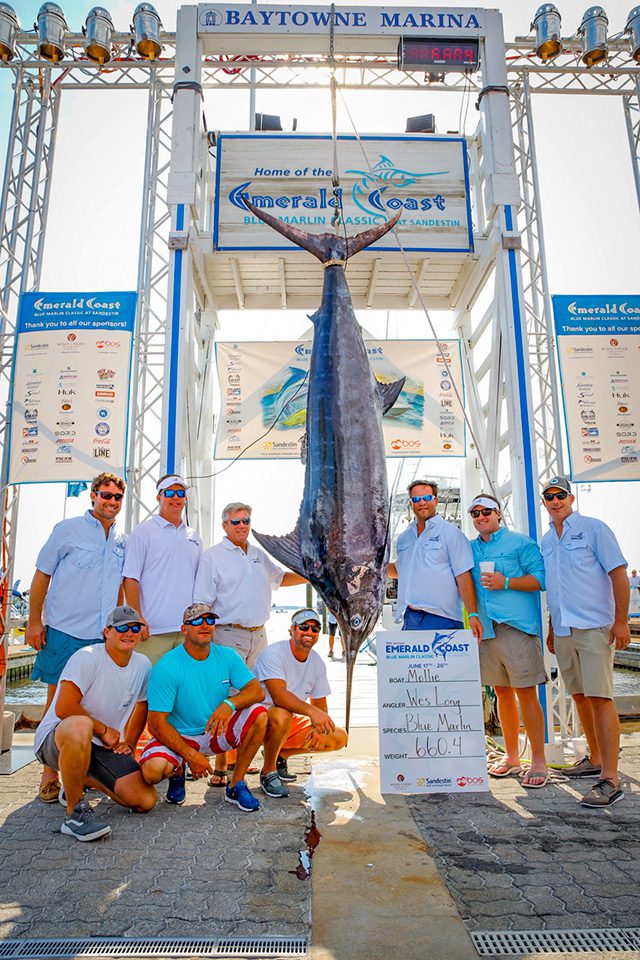 Fleur de Lis, a 72 Viking with Capt. Scooter Porto at the helm, was the top team in the billfish release division. Based in Grand Isle, the team released four blue marlin to claim top prize and $159,415. Mon Chari, (Capt. Matt Coppoletta) came in second in the division with 1,700 points to earn $43,800, and Mollie was third with three free-swimming blues to its credit.

Houston Adams, fishing on his family’s 52-foot Southern Cross, Gunnslinger, wound in the heaviest wahoo of the tournament. It was 58.6 pounds and was worth $49,805. Capt. BJ Teems is Gunnslinger’s helmsman. Ritchie Prince wound in the second-place wahoo at 51.7 pounds. That fish earned Can’t Deny It (48 Viking), Capt. Jeff Bryars and the team a $15,168 bonus. Questionable Judgement, a 39 Nor-Tech center console run by Capt. Kyle King, rounded out the field with a 50.1-pound wahoo. Mark Wade was on the rod and the team won $17,840 for that fish.

Less than five pounds separated the top three fish in the dolphin category. Joey Geil III was the top stick with a 39.4-pound bull, worth $45,800 to Capt. Logan Lovett and the team on Lisa Jo, a 55 Ricky Scarborough. Harris “Destructor” Hartley caught the second-place dolphin at 36.5 pounds. Hartley, Capt. Gary “The Mayor” Jarvis and the team on Misa (60 Blackwell) pocketed $178,068 for that fish, along with tuna jackpot money (134.1 pounds).Misa was another Destin-based contestant. Pearl, the last boat to weigh Saturday, got on the leaderboard with its 34.5-pound dolphin. Michael Spellmeyer was the angler and Capt. Shawnie Clemons runs the 48 Viking. That fish earned $10,112.

“We got really lucky with the weather. It was absolutely gorgeous at the marina and for the boats offshore,” said Julia Brakhage of Tournament Control. She has been involved with the ECBC since the beginning. “We had really good energy from the teams and a lot of new boats joined us this year. So I’m really looking forward to a record-breaking event next year.”

The 2021 Emerald Coast Blue Marlin Classic, celebrating its 19th year, will be held June 16-20, 2021, at the host Sandestin Golf and Beach Resort in Miramar Beach, Florida.