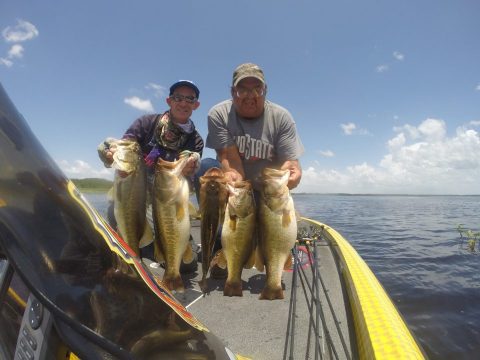 I woke up the morning of July 3rd 2016 at around 6:00 am with a little bit of gitty in my step. Why you might ask. Well, that’s simple. Yeah, you guessed right. I was heading to the lake for a day of fishing. I was just coming off a win in an Extreme Tournament Trail event two weeks prior and wanted to do some last-minute fine tuning before heading to Kissimmee for the I-cast Cup that was slated for the end of July. I was going to meet Ken Gabryel at the boat ramp. At that time, Ken was the owner of, what was known as the Coastal Angler Magazine – Okeechobee. He was going to be my media representative for the Cup and wanted to fish with and talk a little bit about the bait company that I was representing. We ended up fishing for a little over 4 hours and decided to call it a day. Once we loaded the boat, Ken pulled us back around to the parking lot by where he was parked. Ok now, here’s where things start getting a little interesting. You see, normally when I’m by myself, once I get the boat strapped down, I usually leave but Ken and I sat around and chit chatted for the better part of 20 minutes.

As we were about ready to say our goodbyes, we hear a voice yelling, “HELP ME!! PLEASE HELP ME!!”. As we looked up, there was a man running towards us in desperate need of help. The man explained, my two sons just dropped me off at the ramp to load my boat and as they motored away from the dock, something went terribly wrong. The 2 guys, both in their early 20’s was thrown out of the boat. The 19’ Carolina Skiff was stuck at about half throttle as it circled them at a little over 25 mph.

I told Ken and the father to meet me at the ramp as I raced my rig back to the water. As we were heading out from the ramp, the first question that I asked the man was, with both fingers crossed, how much gas does the boat have in it as he replied, almost a full tank.  At that time, I knew that we would only have a couple option, one of which was ramming it only as a last resort. My first thought was to make sure the two boys were ok. Then I proceeded to track directly behind the boat and noticed that it was getting closer and closer the guys on every pass. With my brain in scramble mode, trying to come up with a game plan. I told the father to crawl up to my front locker a grab a 10’ hunk of rope that was laying in the right corner of the hatch. Once he had the rope in hand, I told him to listen very carefully on what I need him to do, I explained.  Crawl up to the front and tie one end of the rope to the right-hand side cleat. With the boat circling to the right, I knew my best option was to come in on the left side of the outboard. Ok, heres what we’re going to do, I explained to the man. As I pull up behind your boat at the same speed, stand up, holding on to the rope tight. The rope will help brace yourself so you don’t lose your balance and fall. Wait for my command and whatever you do, when we get close, don’t jump. As we got with-in inches of his left rear corner, I needed to position my bow so it would be directly over top of his boat and at the same time, not allowing the two boats to touch. In order to accomplish that while maintaining the exact speed of the skiff, once I was in position, by trimming my outboard up, it would in turn raise my bow. At around 28 mph I was able to Position my bow perfectly over the top of the skiffs port stern and had the man step straight down on to his boat just like stepping down from a ladder onto the ground. The man was able to regain control of his vessel and pick his two sons up. After returning to the ramp, the Three men could thank me enough with tears in the eyes.

Now, although there was a happy ending to this story, this could have gone horribly wrong in so many different ways. If whoever was at the controls of the boat was wearing a kill switch lanyard, it would have stopped the outboard the second they got tossed and this extremely horrific life-threatening situation would have never happened.

We as angler are all guilty of not taking the proper safety precautions from time-to-time. It only takes a few minutes to put your life vest on and attach the safety kill switch. You should always be thinking, “SAFTEY FIRST” because you never know when a fun fishing trip could take a turn.