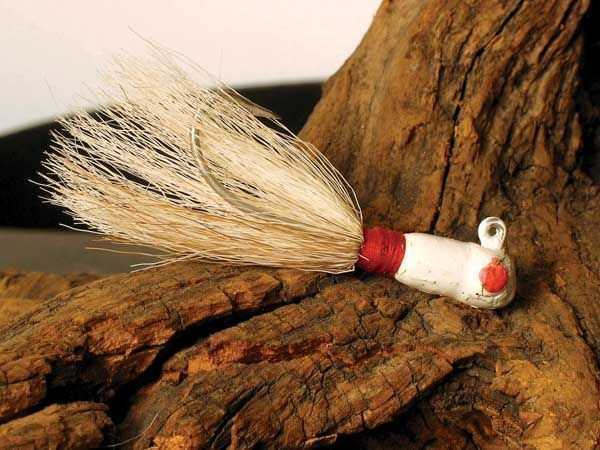 If you were limited to a single lure guaranteed to catch fish in a variety of situations from bonefish to bluefish, striped bass to tarpon, and snapper to sailfish anywhere in the world, what would you choose? While you’re wrestling with your decision, you might find it helpful to know that in the early days of World War II, the U.S. Government answered the question for you. Survival kits in life rafts aboard warplanes and ships contained a package of fishing line and leadheaded bucktails.

The leadhead still ranks as the prime choice for knowledgeable anglers, but it lacks the popularity today that it once had. Still, I never go anywhere without an assortment of bucktails in various weights, sizes and head shapes and they don’t fail me. If you add soft plastics to a leadhead dressed with bucktail or just a plain leadhead, you broaden its appeal and versatility. These modern offerings have been molded into so many shapes and designs that they challenge the imagination. They come in every size up to and including big game offshore baits. Someone is even molding 15-inch ribbon fish, which raise blue marlin when attached to a dredge. Color combinations with or without glitter span the spectrum from light to dark and shiny to dull along with “glow-in-the-dark” fluorescents.

In shallow water, the most common fishing technique with a bucktail centers on casting, letting the lure drop to the bottom, and then jigging it back with a series of short, sharp, upward motions of the rod. Adjust the speed of the retrieve to conditions such as water temperature, target species, water depth, and so forth. Almost any species that relishes artificially and feeds close to the bottom should inhale it.

If you find a school of fish on the surface, make the cast, let the offering sink for a brief moment or two, and then start the retrieve. Even on the offshore grounds, it pays to keep a rod rigged with a leadhead. You gain the versatility of being able to make a presentation to anything that swims around the boat. The leadhead also gives you the advantage of letting you drop down if the fish suddenly leaves the surface and works deeper in the water column.

In deeper water, vertical jigging (straight up and down) produces better results than casting and retrieving. Drop the leadhead to the bottom and use the rod to lift it as you reel in the slack created. If you are focusing on denizens that hug the bottom turf, jig up several feet and then drop it back down. The alternative when fish can be anywhere lies in working the entire water column.

Bucktails perform more effectively when attached to the leader with a loop knot. The rule of thumb dictates that you use the lightest leadhead capable of reaching the bottom. You’ll find that some shapes outfish others. It’s a matter of preference and experience. Fishing a bucktail is becoming a lost art. You can carry a full arsenal in a small box and have the capability of fishing anywhere in the water column for every species that will respond to an artificial lure. Bucktails are unquestionably the most versatile lures ever designed. They may look simple, but in the hands of a skilled angler, they can be deadly. Learn to use them properly and you’ll be the one telling the fish stories.