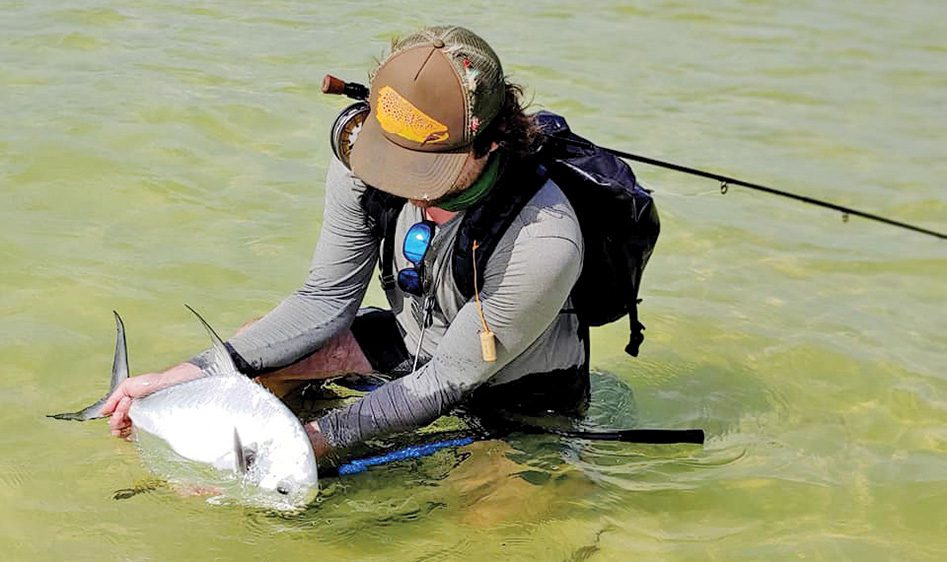 In January, my buddy, Jordan May, and I were fishing the Mayan Riviera Coast near Xpu Ha, Mexico. It’s a beautiful and productive location I visit as often as possible.

Xpu Ha is one of those best-kept secrets on the Yucatan, with gorgeous beaches and less tourist traffic than Playa Del Carmen or Cancun to the north. The resort island Cozumel sits in the Caribbean Sea to the east, but Xpu Ha is quieter. There are a few hotels and restaurants in the area, but nowhere near the bustle of the Yucatan’s larger cities.

I enjoy fly fishing the clear shallows of the Mayan Riviera and had never encountered another angler in prior visits to Xpu Ha. Just imagine our surprise when, on our first full day there, as we were making the morning walk to our chosen location, there in the distance was the unmistakable silhouette of a person with a fly rod. We had to meet him.

After some introductions, Alex informed us this was his first visit to the area. He was from Dublin, Ireland and was stranded in Paradise because of the pandemic. I invited Alex to join us. We were headed to a reef known to hold triggerfish and an occasional permit. He jumped at the offer.

Alex said his goal for this trip was to check permit off his bucket list. It’s a species he’d been chasing for several years. Over the next few hours, we waded and Alex had several opportunities at tailing triggers on the shallow reef. He got a few follows that day, but no hook-ups. He managed to cross triggerfish off his list the following morning.

When Jordan had to return to the states, Alex and I made plans to fish farther south at Sian Ka’an. South of Tulum, Sian Ka’an is a large nature preserve of coastal wetlands and inland jungle. Our goal was to target bonefish, with high hopes for an elusive permit.

The winds were relentless and the partly cloudy skies made spotting fish a challenge. An hour into our stalk, at 50 yards, we saw the tell-tale shadow of a good fish. Alex said it looked like a nice bone. I said, “No, permit!”

Alex’s first cast fell short. No a big deal. It was better than a long cast that would have spooked the fish. After reloading and taking a few breaths, Alex’s next cast was a quartering shot, 2 feet ahead and 5 feet past the fish. Perfect!

Alex stripped twice. The permit noticed the fly, but began to turn away. I knew we were still in the game and told Alex to stop. When the fish turned back to the fly, I said, “strip!” But it was too late… the permit had pounced, and with a perfect strip-set the game was on!

Within 10 minutes of keeping constant pressure, “Alex the Irishman” fought his first permit to the net. It’s a fish both of us will remember the rest of our lives.