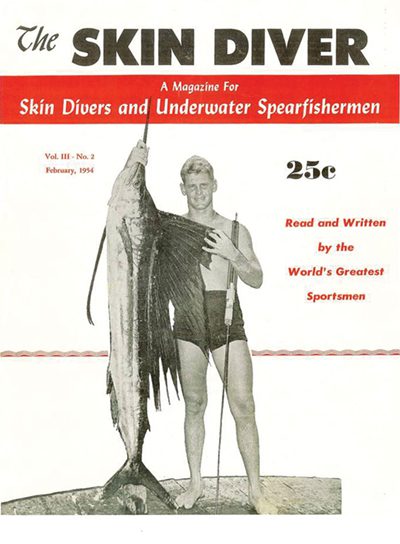 Most divers shoot spearguns with tethered shafts, but some have been shooting Hawaiian Slings, with bare spears, for decades. In 1948, Art Pinder stoned a 7 ft & 56 # Atlantic Sailfish, with his sling and the press printed the photo nationwide. A few years later the slinging Pinder brothers won team and individual US Nationals Championships and made the cover of Sports Illustrated, a feat never repeated.

I started spearfishing in 1972, with marginal success with line shafting. After seeing Jim Zumwalt, another US National Champion, freeshafting his Seahornet speargun. I too shed my line, and by the way Jim and Gary Zumwalt are the only father and son spearos to both win the Athlete of the Year Award. 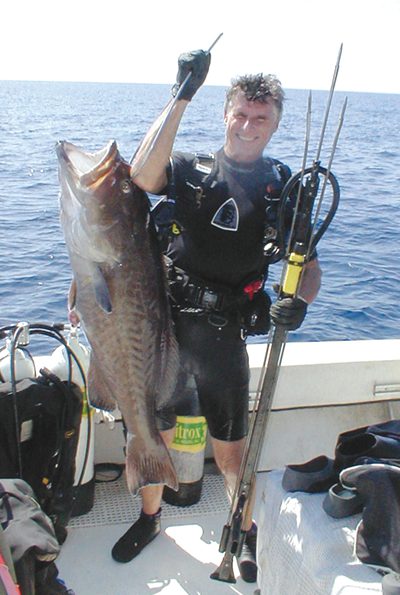 I found that like slings, freeshaft spearguns greatly increase accuracy and can double a gun’s range and a faster shot with a single strong band. Freeshafting is very simple and because of that my well-aged Seahornet speargun can compete with today’s newer guns.  Reloading can be as fast as 5 seconds and allow a killshot on wounded fish. Line guns take 10 or 20 times more, to reload. I designed shaft holders to carry up to 3 shafts on my gun and a thin bright light. A freeshaft can be pulled through a fish instantly after stringing it. Entangled shooting lines can be very dangerous, but not freeshafts. Changing a bent lineshaft and tether is a tedious boat task. Lineshafts typically use 2 to 3 bands or more, expensive double barb tips, with some detachable. A freeshaft is a sharpened spear with a single lock-out barb.

My largest fish and my buddies have all fallen to freeshafts, mostly bottom dwellers like grouper, snappers and hogfish which rock up when shot. But many pelagic fish like AJs and cobia have been freeshafted near bottom. Most all my Bahamas fish fell to freeshaft slings. Some new slings now have lines and reels but they do slow your shot.

Lineshafts have their place when it’s bottomless and for Bluewater fish like tuna, wahoo, african pompano etc. I recommend practice freeshaft shooting on flattened aluminum cans. You’re going to love it!