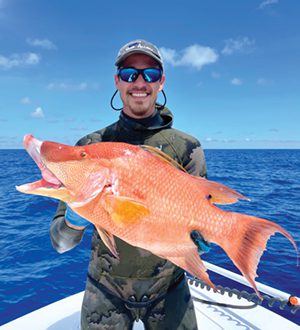 Hogfish are a unique species that belong to the diverse Labridae family, which includes over 600 fish known as wrasses. These fish are the largest of the Western Atlantic wrasses, reaching lengths of up to 3 feet. Hogfish are sometimes called hog snapper but do not belong in the snapper family. In fact, their common name is a result their pronounced snout and hog-like rooting behavior they use while searching for prey in the sand. 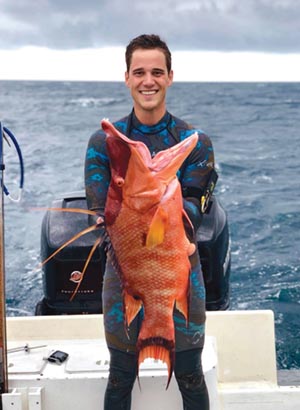 Hogfish can be spotted in the Atlantic from North Carolina to Brazil, where they live in depths of up to 200 feet. These fish, however, are more commonly found in depths of 100 feet or less, where they can use photosynthetic organisms like sea fans for cover. During the day, hogfish can be found on the reef or the surrounding sand where they forage in the sediment for clams, crabs and shrimp and sea urchins. This species has a set of crushing plates located in their throat that help break down the shells of their prey.

Hogfish are all born female and later transition to males later in life due to social cues in their local population. These fish spawn in groups where one male can have a harem of multiple females. When the male is removed from the population, the largest female begins her transition to male and develops a more dramatic sloping snout as well as darker pigmentation around the face, almost resembling a mask.

It is believed the female-to-male transition can take up to two months, internally, while the external characteristics continue to become more pronounced over time. Sex change from female to male in a typical population occurs at around 3 years of age and 14 inches fork length; however, if there are no cues to transition, there have been documented females as old as 12 years of age and around 25 inches with the oldest hogfish found to be a male at 23 years of age. 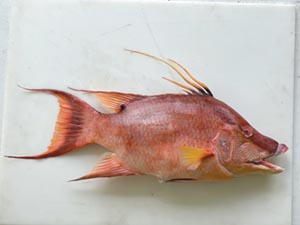 Conversely, in populations with heavy harvesting pressure, hogfish have been known to transition at a much smaller size. Hogs spawn during winter-spring where the males perform interesting behaviors of quivering and raising fins before rushing a few feet off the bottom with the female expelling her eggs and sperm. A single male can spawn multiple times in a day while a female hogfish can spawn multiple times per season. Hogfish eggs hatch within 24 hours and are in the larval form for about a month until they settle out of the water column as recognizable juveniles.

When considering seafood sustainability, hogfish harvested in the United States with hand implements are listed as a best choice by the Monterey Bay Seafood Watch. The International Union for Conservation of Nature has listed the species population as “declining,” which is supported by the yearly number of commercial landings in Florida. That makes it important to take proper care when handling and releasing this fish if caught on hook and line or follow most current fisheries regulations.

Michael Sipos is the Florida Sea Grant agent for UF/IFAS Extension, an equal opportunity institution. Contact him at sipos624@ufl.edu.