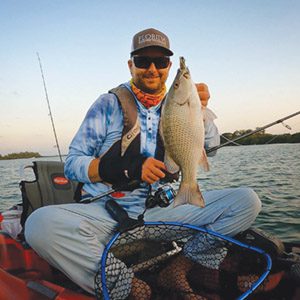 Coming in hot with one of the hottest months of the year, July! Productivity can remain high if you follow the summer patterns. With high water temperatures during this time of year, getting out on the water before daybreak or after sundown really makes the difference between having an “ok” day of fishing or an outstanding day! Furthermore, when it comes to these low light conditions there is no better choice than a topwater lure, like the 3DB. You can bomb this thing for miles, cover lots of water, and the topwater assault on a lure is like no other. I have seen times where they will eat it so close to the kayak that it will literally scare you. Then there are times they eat it so far away and all you hear is what sounds like a gunshot and the sound of your reel’s drag burning; just doesn’t get much better!

A few summer tips about some of our local fishery.

Snapper- These guys are in an extreme abundance and can be caught just about anywhere in the Gulf waters. They HIT hard, fight well and are incredibly delicious. Fishing the docks is probably the easiest way to catch them right now. I generally use soft plastic shrimp, but live shrimp will get them fired up; especially if you chum! Like the saying goes, “If you chum, they will come”!

Snook- These are generally one of my favorite species to target this time of year because they become a little dumb when they are in spawning mode. I have been trying to leave them alone this season, so they can do their thing – in peace.

Trout- Look for them to be a little bit deeper than usual. They will be hanging out on drop offs and deeper grass-flats where the water temps are a little cooler.

Redfish- This is one of my favorite months of the year for redfish. These fish will be joining forces in huge schools scouring the flats for their next meal. A lot of the redfish will be upper to over-slot fish but tons of fun to catch!

Remember though, with water temps as hot as they are, if the fish are acting to sluggish to chase down a lure, don’t be afraid to slow things down a bit. Maybe even save one or two of those pesky pinfish or lady fish to use for a little cut bait. Sometimes a piece of chunk bait on a circle hook can be the golden ticket!

Make sure to be safe, stay hydrated, and respect your fellow anglers on the waters at all times; there is plenty of water out there for everyone. Tight lines and tight knots to all!