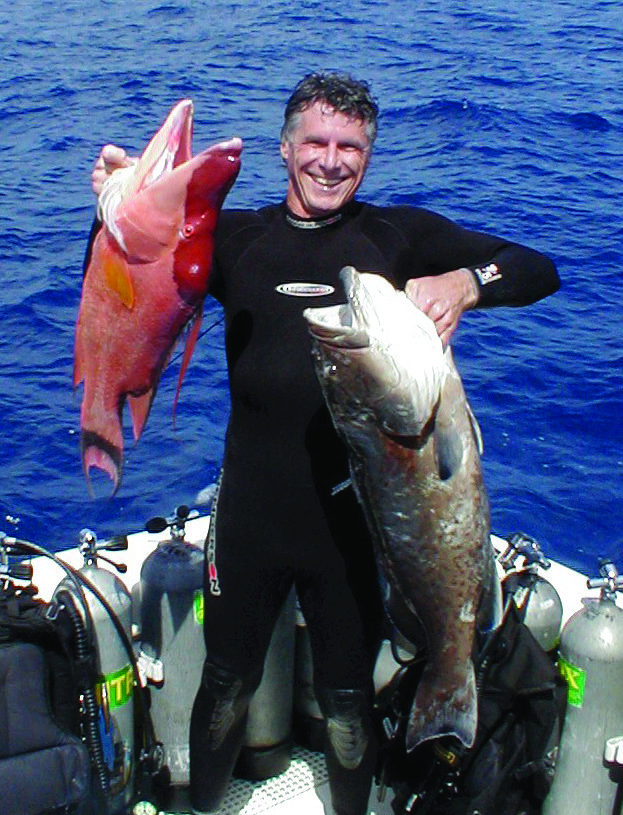 Finding fish is a never-ending focus for spearos. Sites everyone sees, like bridges and rock piles are usually fished out, as are close-in artificial reefs and published wrecks. Deeper than 132 ft and far offshore you’ll likely find more plentiful & bigger fish! Amazingly with today’s great GPS & bottom/fish finders, many boaters can’t locate big wrecks and reefs. Stop drawing daisies and work a tight grid resembling a parking lot around the number. Keep looking for any structure/fish & mark your screen. We always drive & watch – everywhere and find new spots with short bounce dives. Get a marker jug and 4lb weight with enough extra line to hold the location, even in poor visibility. I’ve found many small potholes & rock piles loaded with fish and nobody else has ever fished them.

Counties in Florida publish artificial reef coordinates, but they were often wrong in the days of Loran to GPS conversions. Private companies sold books, discs, and websites with tons of numbers, but lots are repeats and incorrect. GPS manufacturers publish the numbers in their devices now, so accuracy is better, but not all. Google Earth now shows shallow clear waters and lots of spots to check out, and plot. Check back years of photos on the Historical Imagery tool.

Scouting is as important today as it was before the cool electronic gadgetry because divers need to not hammer just a few sites. We often dive sites run over in the past, but not dove. It’s surprising how good sites can be that don’t look like much. Search old numbers too, like broken down shrimper wrecks; grouper and snapper love them!

If you come over to the Gulf side, it has few pretty wrecks, because they blew the hell out of them, breaking hulls up fast. Ugly dives produce fish! I followed a big gag swimming due south back in 1999 and he led me about 40 yards to an unmarked pile of boxcars, where I shot him and multiple mangroves. A year later my buddy shot a 39 lb. PB gag! One wreck lost its superstructure in a storm in 1993, so I swam all around the hull and found it 150’ SW and teaming with gags. Many deep reefs are for anglers, but hooked fish often hole-up and shed tackle. Deep dive sites require technical training, gear, and experience but they’re worth the cost and effort!