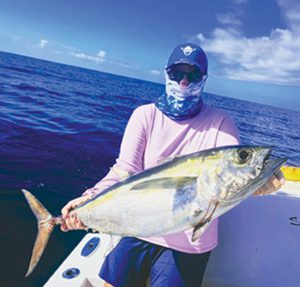 September is here and it’s my favorite time to fish offshore of the Florida Keys. It’s a great time to get in on the late summer action for blackfin tuna and mahi.

The tuna bite has always been great in late summer and early fall, but the last few years it has also brought some of the best dolphin fishing of the year. Just a few years ago I would have told you that the peak of the dolphin fishing in the keys came in early summer, sometime around the month of June.

I don’t know if it has to do with climate change, changes in migration patterns, or just the amount of fishing pressure in general, but if you ask me or most of the other charter captains in the upper keys, for the last several years the mahi fishing has actually been better in late summer and early fall. 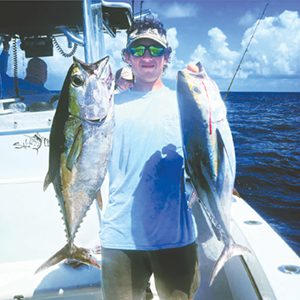 The best tuna fishing off of the Upper Keys will usually be found around the seamounts like the Islamorada hump, the 409 hump, and the west hump. They can be caught several different ways. Almost anyone can get in on the action trolling small feathers and squid skirts rigged on light leaders pulled far back behind the boat. My favorite way to catch the tuna is live baiting them with either pilchards or cigar minnows. This technique requires a lot of live bait, but there’s nothing more fun than chumming the tuna into a frenzy with a live well full of pilchards. If you’ve never experienced this type of fishing, I highly recommend booking a charter to get in on the action and see what it’s all about. 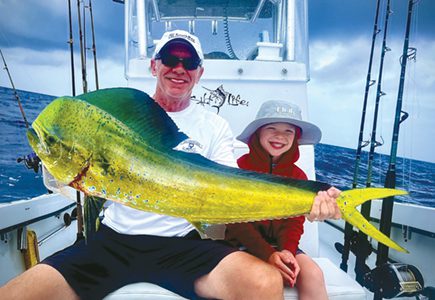 The best dolphin fishing can take place anywhere from 10 miles offshore and out. You’ll find them the same ways you do in early summer. Floating debris, birds, and weed lines are all great signs to look for when targeting the mahi. As a general rule, I like to concentrate more on current edges with sargasso weed lined up on it and a little bit less on birds this time of year, as sometimes it seems like the birds don’t get on the fish as consistently as they do earlier in the season. You’ll catch mahi of all sizes this time of year, but often you can find decent sized schools of nice gaffer size mahi this late in the season.

The combination of the mahi fishing we’ve had the last few years and the awesome blackfin tuna bite we experience this time of year can make for an amazing offshore fishing trip. Give me a call and let’s get in on the action!