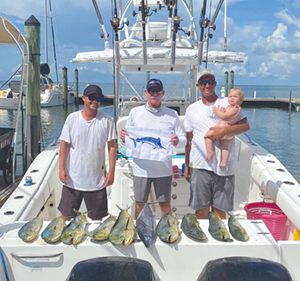 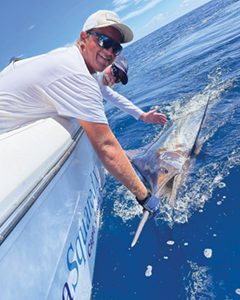 Thanks to much cooler water temps, the bait migration from the north is in full force, specifically ballyhoo, cigar minnows, sardines and pilchards. Trailing behind the baitfish are the hungry pelagic predators as they end their migration to the Keys Atlantic waters for the winter. Most notable are the sailfish, but cobia and king mackerel also arrive from the north. Meanwhile, the dolphin and tuna creep closer to the reef edge to get in on the feast.

And it’s not just the pelagics. Also enjoying the bounty of baitfish are our year-round reef species, mutton, mangrove and yellowtail snapper, black and red grouper, large cero mackerel, amberjack and more. Too many to list.

As the sailfish arrive in increasing numbers, they come with an appetite and quickly home in on the baitfish. The sailfish are most often seen spraying ballyhoo in the 30-foot shallows early in the morning and late in the evening.

This is a sight-fishing game, so anglers with towers on their boats have an advantage. Look for frigate birds diving the water surface in the distance. This indicates where the sailfish have corralled the ballyhoo.

When the sailfish attack the ballyhoo, the baitfish shower out of the water. The goal is to get yourself in the zone before the attack takes place. Be sure to have a dozen or so live ballyhoo in your live well, ready to throw at the target sailfish.

When the early-morning action calms down around ten or so, it’s back to catching a few fresher ‘hoos to get you through your day. Anchor up, chum them to the boat and either throw a cast net or hair hook them.

Advance directly offshore of where the initial sailfish action was – or where you’ve seen activity in the past – and put a spread of live ballyhoo just outside the reef edge anywhere from 90 to 120 feet of water. This is where the sailfish lurk during the day, waiting for an opportunity to eat. Any wandering ballyhoo becomes an easy snack.

It’s not always sailfish spraying the ballyhoo, so be prepared as quite often we’ll see quality size dolphin in the 15- to 20-pound class chasing the baitfish.

While live-baiting off the reef edge, it’s also productive to try for kingfish. Run a bait down 20 to 30 feet with a small trace of wire and 4 to 6 ounces of lead to catch a king or two for the smoker. It’s not unknown for a sailfish to be taken on that down-rod, so be prepared for that as well.

The yellowtail snapper bite gets going in earnest with the cooling waters on the reef. This is when we start to see a mixed bag in the catches, with more mangrove snappers getting up shallow. It always pays to have a bottom rod down in search of mutton snappers and nice size black groupers.

For the yellowtails and mangroves, you want plenty of chum with YellowtailUp, SnapperUp and Mojo Oats from Aquatic Nutrition to make your slop. Small pieces of ballyhoo are the best baits. For the down rod, use a nice live bait – preferably ballyhoo this time of year – but pilchards or pinfish will also work.

The bay and gulf side fisheries rev up as well during November. Good size mangroves are on the grass banks, wrecks and channel cuts.  And the Spanish mackerel show up in huge numbers. This is the month for your mack attack!

There are no specific spots for the Spanish mackerel. We like to anchor up near a piece of bottom structure, but not right on it. Put a block of Bionic double-ground chum in the water. And wait. The mackerel should show in short order.

Use a fresh shrimp threaded on a jighead, cast back in the slick and retrieved quickly. The strike can be jarring. If there’s not a lot of floating bay grass, small shiny spoons and small bucktails will also do the job. Just remember to have a foot-long or less trace of #4 wire to prevent bite-offs.