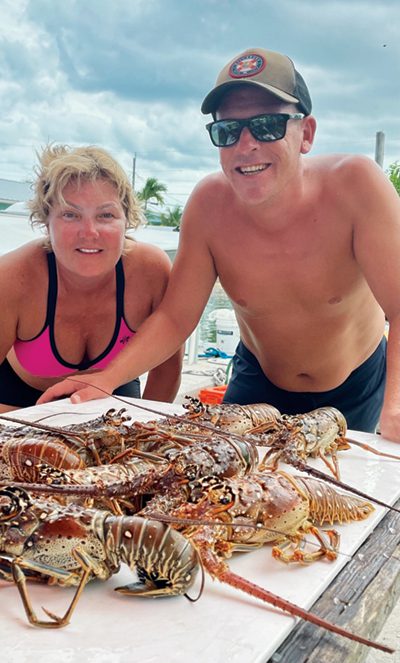 Mini season and the start of regular lobster season was a big hit again this year. People from all around the world flock to the Florida Keys in search of these tasty bugs. Us locals benefit from all of the tourism, however when it comes to getting our own lobster, most locals prefer to wait and get them from mid-August to mid-November. The tourism usually slows down during that time. A new crop of lobsters migrate in during that time and it can be easy pickings for the locals with lots less competition from the tourists. After Hurricane Irma in 2017, many trees in the back-country islands were uprooted an blown out on the grass flats. On a 2-ft deep grass flat, we were finding 40-ft long trees with Volkswagen size root balls. Over time with extreme currents flowing through the flats, the rush of the currents flow would bore out a giant divot under the root ball. It would create an 8-ft deep clear white sand pool underneath the root ball. This proved to be major lobster habitat. We dive underneath these root balls, turn upside down and look up into the roots of the root ball. At first glance we see what looked like a bunch of roots hanging down, but on second glance you’d realize what you’re looking at is dozens of lobster antennas. 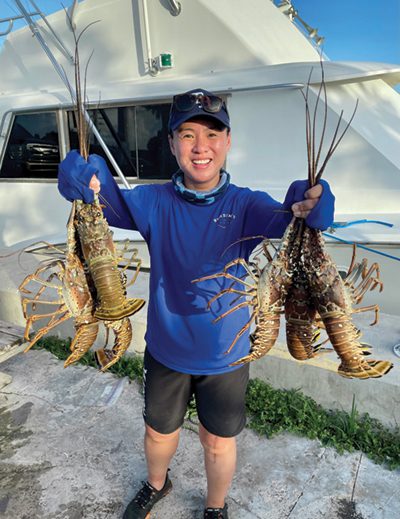 We learned it was very difficult to extract the lobsters from deep up in the roots using a net and tickle stick, so we found the very best way to get them out was with a lobster lasso. The bad news about these lobster trees is now 5 years later most of them have rotted away and the lobster have found new habitat. Lobster enthusiasts keep lobster GPS #’s guarded closer than Ft Knox. If you don’t have special #’s here’s some tips on finding them on your own. Google Earth 10-ft bomb holes in the gulf or look for reef bottoms that look like swish cheese from Google Earth. The bridges and seawalls are very consistent lobster spots too. If you are inexperienced at diving or snorkeling for lobster and want to give it a try, I recommend hiring a lobster guide. Ana Banana Fishing company can assist you anytime during lobster season. We also offer lobster/fishing combo trips. Lobster in the morning and fishing in the afternoon.