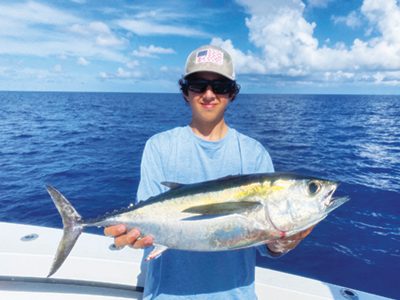 Although blackfin tuna can be caught year-round in the Florida Keys, every year we experience a fall run that starts around mid to late August and goes through September and into October. This can be some of the most consistent and best tuna fishing of the year. I always look forward to heading to the seamounts offshore of the upper keys like the Islamorada hump, the 409 hump, and the west hump with a livewell full of pilchards to catch some tuna. 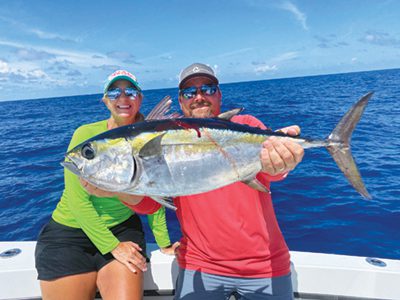 There are a few different ways to catch blackfin tuna offshore of the Keys. Trolling small squid skirts or tuna feathers on light 30-pound fluorocarbon leaders far back behind the boat is one way that almost anyone headed offshore can get in on the action. Vertical jigging can also be a very productive way to catch these fish and you’ll often catch bigger tuna with the jigs than you will with the trolling stuff. The most effective method and in my opinion also the most fun is live bait chumming. Throwing scoops of pilchards or cigar minnows behind the boat up current from the peak of the seamount while drifting baits out on light spinning tackle. 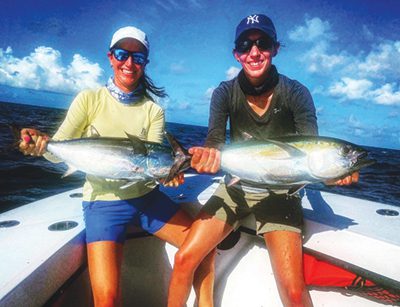 The sight of big blackfin tuna exploding on the surface chasing live bait has to be one of the most exciting scenes you’ll witness on an offshore fishing trip in the keys. Once you get the tunas fired up on the freebies and start hooking them, the bite can be instant. When you get them biting, don’t stop hooking these fish until you’ve got several on. It takes a lot of bait, hard work, time, and a little luck to get them fired up and you’ll want to capitalize on the bite while it’s hot. While fighting multiple fish, make sure you follow your fish quickly around the other lines to avoid tangles.

There can be off days, but most days this time of year the fishing is consistently good and often the hardest part is getting them to the boat past all the sharks that are waiting to eat your hooked fish. Getting the tuna past the sharks can be challenging as you usually have to use fairly light tackle to get the bites. While you don’t want to horse the fish and break him off you do want to try and work them in as quickly as possible to keep them away from the predators. In addition to the blackfins, mahi mahi, skipjack tuna, and even an occasional billfish can pop up in the live baits and make a great addition to the day’s fishing.

Be sure to get in on this September tuna bite offshore of the upper keys this year. If you don’t have the right boat or equipment to do it yourself there are plenty of guys like me that will be ready to take you. Give me a call and let’s get in on the action!