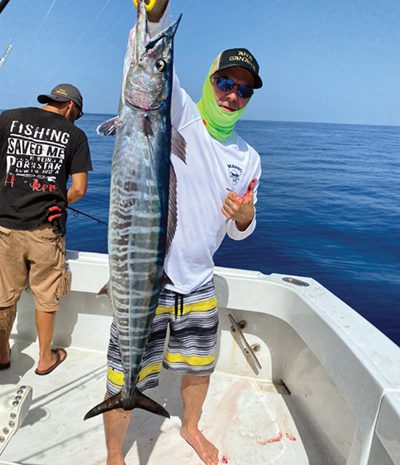 As the weather cools down and the wind picks up our mahi strategy changes. During the hot calm summer, we mostly look for birds and weed lines. During fall we’ll still look for birds and weed lines, but because there’s less of both, we’ll look for floaters and weed islands more. Some of the most productive floaters we’ve fished lately was a bucket, pallet, buoy with knarled rope around it, the bow of a Cuban raft, piece of airplane wing, tire, garbage bag full of trash, log, tree, bamboo stick, suit case and I could go on and on. Almost anything floating out in the ocean is like an oasis in the desert.

Baitfish like bar jacks, goggle eyes, flying fish, triggerfish, triple tail, file fish, torpedoes and several others hang out under the floating object. The depth under the floater might be 650 feet deep. Often an entire eco system exists all the way to the bottom. Normally from the midsection to the surface under and around the floating object is mahi. Many times, under the mahi is amber jack and wahoo. Under the wahoo are tilefish and grouper on the bottom. Yesterday we approached a floating pallet 4ft x4ft. You could tell it had been out in the ocean for a while, because it had weeds and barnacles and was pretty dinged up. Fish like weather objects a lot more than a fresh object. As we approached the pallet, I yelled down to my mates “put em out, put em out” several hundred yards before the pallet two naked, pre-rigged single hook, wire ballyhoo were deployed 100 yards back and clipped to the outriggers. 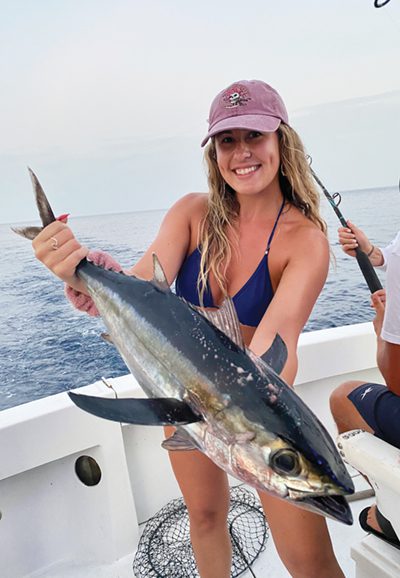 A 3rd line was deployed with a large purple and black feathered dart on wire. As I trolled past the pallet one of my first mates yelled big fish on, so I yelled “doubled up”! Then my other first mate yelled tripled up! Lost a 40lb bull at the boat, gaffed his wife a 20lb cow and landed a 25lb wahoo. Now there’s a hundred different ways to approach that pallet. A thousand different lures, techniques, etc. Here is why we did what we did. We trolled two naked ballyhoo, because the mahi are feeding on flying fish. We didn’t put a skirt on our ballyhoo because, the ballyhoo wasn’t born with a skirt. We put both out together at 100 yards because a bull and cow mahi become mates for life after they become 30inches long. The prominent bull and cow eat first and eat together and that’s what they did. The reason we had a shot gun up the middle rigged with a purple and black feathered dart was because we suspected that wahoo would be hanging around our floater. 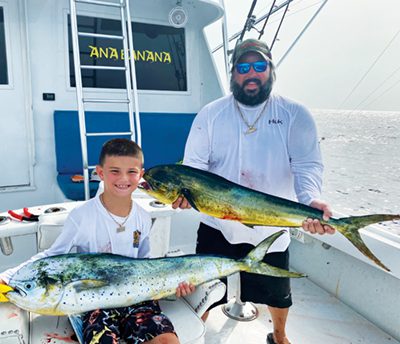 This time of year, anytime we open a wahoo’s belly a baby blackfin tuna or baby skip jack fall out. They’re only 6 or 8 inches and they happen to be purple and black. We trolled by several more times and caught several more mahi and wahoo. After a while they got educated to the troll, so we backed up to the pallet and started chumming with cut squid and ballyhoo. We started catching schooling mahi and also dropped a virtual jig almost to the bottom and while jigging up we caught our biggest wahoo of the day!