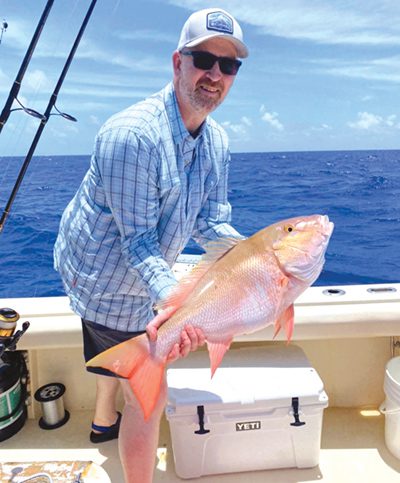 On the reef, where the mangroves and yellowtails respond well until mid-morning.  When the sun gets high in the sky, the fish easily see your line, and the bite can slow a bit. This time of year, you’ll need to use abundant quantities of chum, as the snappers on the reef are spawning and react best to copious amounts of food.  We supplement our block chum with YellowtailUp and ChumDrop. We concentrate on the hard-hitting mangrove snappers as they are more aggressive and easier to catch.  You’ll find them in the shallower, 35- to 50-foot, depths.  They average two to four pounds, but we’ve seen them as big as ten pounds!

Live baits do the trick most often, including pilchards, small pinfish to about three inches and small ballyhoo.  Some days, the mangroves prefer a chunk bait, such as a slice of pinfish or ballyhoo, or even whole dead pilchards.  Drift these baits back in your slick the same as yellowtailing, or fish them on jigheads at or near the bottom.

Slightly heavier leaders are required for the mangroves, as their teeth can cut through the lighter leaders rather easily.  And, with these bigger baits, we like to use larger Owner SSW hooks in either 1/0 or 2/0 sizes.  Jigheads ranging in size from ¼ to ½ ounce will cover all current conditions. 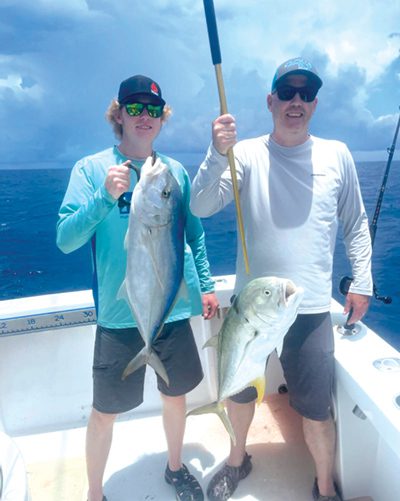 The yellowtails are less aggressive, so it’s best to use light 15-pound leaders, small #4 to #6 hooks and small chunks of cut bait, such as ballyhoo, to mimic the pieces of chum drifting in your slick.

Our typical setup for mangrove and yellowtail fishing is a 7-foot Star Stellar Lite 12- to 20-pound rod with a Penn Slammer III 5500 reel spooled with 12-pound Berkley Pro Spec and 20- to 25-pound Seaguar fluoro leaders.

While you’re fishing on the Atlantic side, check out the deeper wrecks and artificial reefs for nice size mutton snapper and very large black grouper.  The Marathon area sees muttons up to 20 pounds this time of year, although the majority are in the 12- to 14-pound class.  Live ballyhoo, pinfish or cigar minnows are the baits of choice.

For the last couple of years, we’ve had a pretty consistent run of dolphin during August and September.  This time of year, there are lots of weed lines and giant pads of grass, which is where you’ll find most of the dolphin action. 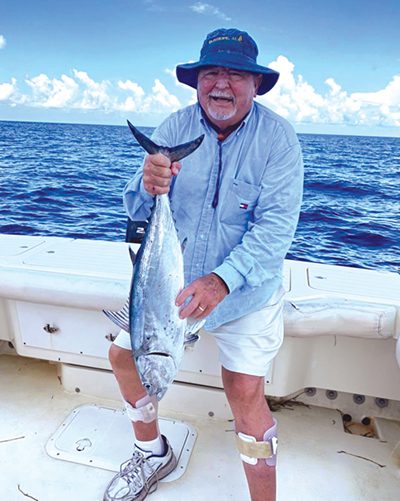 You will also find wahoo mixed in.  Trolling around these weed lines with lures that resemble flying fish – typically blue and white or blue and black patterns – will provide the best results.  Also look for birds picking away at the grass, which will help you eliminate a lot of empty water in your search for dolphin.

Those with an electric reel setup can search the bottom, looking for any sort of hill or deep depression to find tile fish, rosefish ad snowy grouper.  Squid is the best bait for this.

Lobster season opens August 6 and brings with it an influx of boaters not familiar with the Keys waters.  Be mindful of the additional boat traffic and be on the lookout for dive flags indicating the presence of lobster hunters in the water.

— Capt. Chris Johnson specializes in offshore, reef/wreck, gulf/bay, sailfish, shark and tarpon fishing with SeaSquared Charters, docked at Faro Blanco Resort and Yacht Club in Marathon.  You can reach him at 305-743-5305, http://SeaSquaredCharters.com.  For daily fishing reports with pictures, please click over to http://Facebook.com/MarathonFishing.