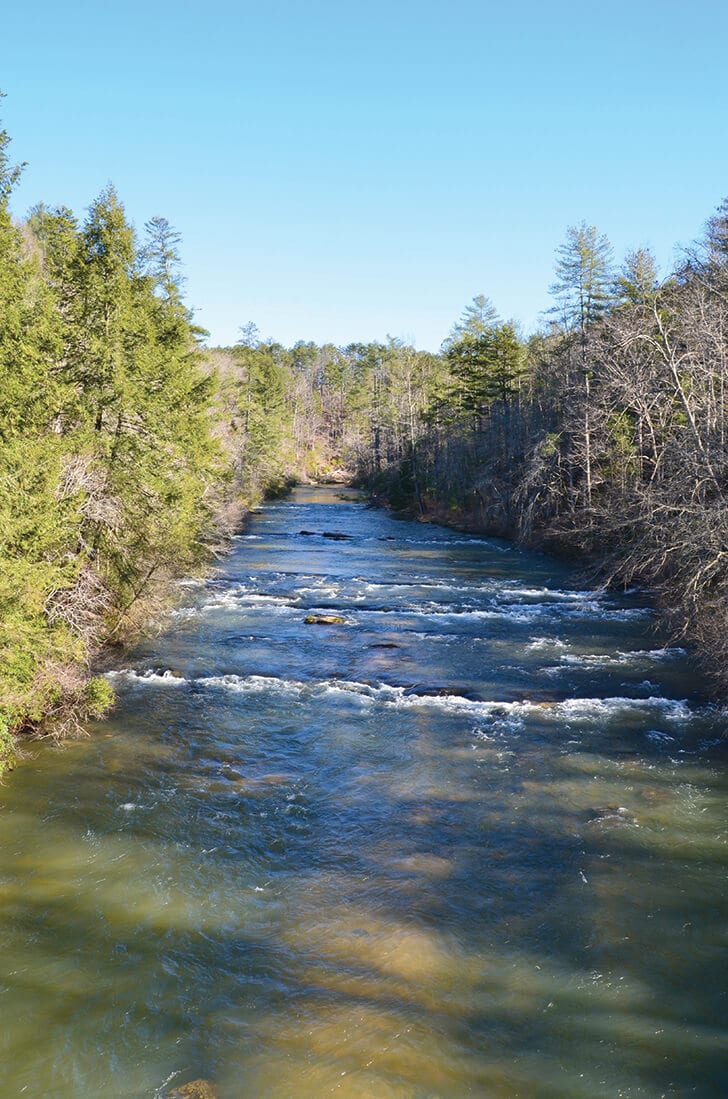 (An abbreviated excerpt from “Flyfisher’s Guide to North Carolina & Georgia”)

As a trout fishery, Amicalola Creek west of Dawsonville is perfectly suited for a delayed harvest section. The original intent of these very popular fisheries was to create wintertime fisheries in streams that grow too warm for trout during the summer. For most of its length, from its highest public access point at Wildcat Creek Campground to its junction with the Etowah River, Amicalola is not great trout habitat. In Dawson County, it’s on the southern edge of Georgia’s trout waters to begin with, and its impoundment in Fausett Lake upstream of Dawson Forest WMA does not help the situation. So the potential for reproduction and holdover fish in Amicalola Creek is not great.

As a hatchery supported fishery, however, it’s a pretty good stream. Amicalola receives a steady almost year-round flow of hatchery fish from the Georgia Wildlife Resources Division. The DH section is heavily stocked in the winter months, and regular stockings begin in March and last into the summer.

During the DH season, Nov. 1 through May 14, thousands of trout are stocked into a roughly 2.5-mile stretch between Steele Bridge Road and the Georgia Highway 53 bridge over Amicalola Creek. Around these two bridges is where anglers will find most of the fish late fall through early spring, especially after a recent stocking, but foot access by gated WMA road as well as a streamside trail offer access to less pressured fish and water.

With catch-and-release, single-hook, artificial-only regulations, many of these fish stay in the creek through the delayed harvest season. Early on in the season and when there has been a fresh stocking, anglers can have banner days with the standard DH fare—bright and flashy nymphs, streamers, egg patterns and San Juan-style worms. But like all the DH streams, it does receive some fishing pressure. Successful tactics transition to more natural ones as the fish grow wiser.

Amicalola Creek is quite large through the DH stretch. Deep holes and bedrock ledges characterize the fishery. Through shallower areas, systematically picking apart the ledges, seams, runs and other holding areas from bank to bank before moving upstream can produce fish many anglers miss as they plow ahead upstream making long, cross-current casts. The deep holes can also be extremely productive during the winter when fish are hugging the bottom. Use enough split-shot to get your offerings down to the fish, and adjust depth according to the water you’re fishing.

For GPS coordinates to access points and detailed maps of all North Carolina’s and Georgia’s best trout water, check out “Flyfishers Guide to North Carolina & Georgia.” It is available at fly shops, on Amazon, and signed copies are available from the author by emailing nsc8957@gmail.com.