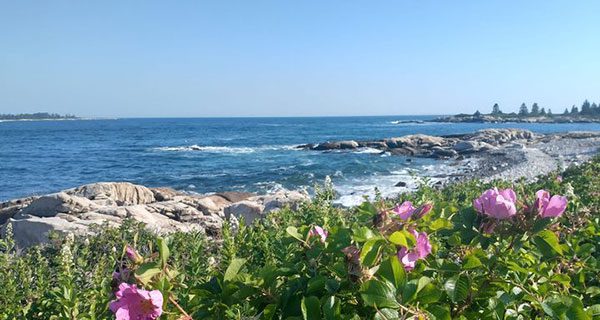 I received an unbelievable – and wholly unexpected – blessing recently. One that, quite honestly, got me pretty emotional. And I need to say some thank you’s. But first…

I had recently been told that Honorably Discharged Military Veterans can receive a free day pass to National Parks, with proper documentation. I served 8 yrs Active Duty Air Force, including as a Medic during the first Gulf War with the 48th Tactical Fighter Wing out of RAF Lakenheath, England.

I’m proud to have served my Country, but beyond that, I don’t talk about my experiences too much – unless it’s with fellow Vets. But this was an offer I was happy to accept while on vacation back to Maine. So I stopped in at the Schoodic Campground of Acadia National Park to get a day pass.

I wasn’t really prepared for what happened next. When I gave the Park Ranger my Veterans Administration ID they looked up and said, “It says on here that you’re ‘service connected’.” I said, “Yes. That’s correct.” She put down the ID, looked me dead in the eyes, reached across the counter to shake my hand and very genuinely – and gratefully – thanked me for my service and sacrifice.
Most of you probably don’t know this about me but when I was younger, I wanted nothing more than to be a Park Ranger. Wildlife Officers were, and are, heroes to me.

Growing up on Frenchman Bay in Maine every summer, I was heavily influenced by the full time resident Ranger of the State Park right next to our family homestead. He always took the time to talk to me about fishing, about the outdoors, about the wildlife of the area and about the science of good stewardship. He outworked everyone but also had a comforting laugh that never forgot to soak in the splendor around him. And he could outfish me 8 days a week! Something no one else could do.

What I didn’t mention was that he only had one arm. He would cast out his line then tuck the butt of the rod up under the knob of his armless shoulder and then quickly twist his upper body to work his lure, while reeling with his one hand. His hook sets were epic.

He made me dream of one day wearing a Ranger uniform. So, every time I see a wildlife officer, I see him too. That’s not the only reason why the gesture toward me at Acadia hit me so personally though.
For those that don’t know, “service connected” is the term used by the VA to identify people who suffered injuries that caused a permanent disability of some sort, while serving in military uniform. For me, it’s my knee. It’s darn near useless. But other than it being on my Veterans ID Card, I don’t bring it up.

I don’t see myself as “disabled”, just “mobility impaired”. I work through it just like my Ranger teacher did. He never complained once, so neither do I, but this Ranger knew exactly what that phrase on my ID meant and zeroed in on it – and on me.

That’s when I got the big surprise, she informed me that officially designated “Disabled Veterans” get a Lifetime All-Access Free Pass to ALL National Parks and Federal Recreational Lands. That’s more than 2,000 recreation sites managed by five Federal agencies! As she prepared my Pass, she thanked me again. I didn’t know what to say other than a shocked series of thank you’s.

Another thing that some of you may not know about me is I’m an unofficial understudy of Jon Muir. He is often referred to as “The Father of The National Parks”. If you’ve been enjoying my writings of late, look him up. He’s the master naturalist, the bar that has been set on how to write about nature’s bounty of blessings. I am more than just a fan of the National Parks, I am a passionate believer in their purpose.

So let me bring this back around to where I began. Thank you! Thank you to every American who’s taxes help pay for the preservation of our wild areas. Thank you to every American who helps to give an amazing gift like this Life Pass to a simple Veteran like me. And thank you to our Wildlife Officers and Rangers who devote their lives to making sure our great-grandkids have natural beauty to enjoy and be humbled and inspired by.

Looks like I’m going to be doing a LOT more writing, about a LOT more places.

Matt Mittan is the Owner of Serenity Guide Service out of Asheville and is Co-Host of “Matt & Michele Outdoors” travel radio show.