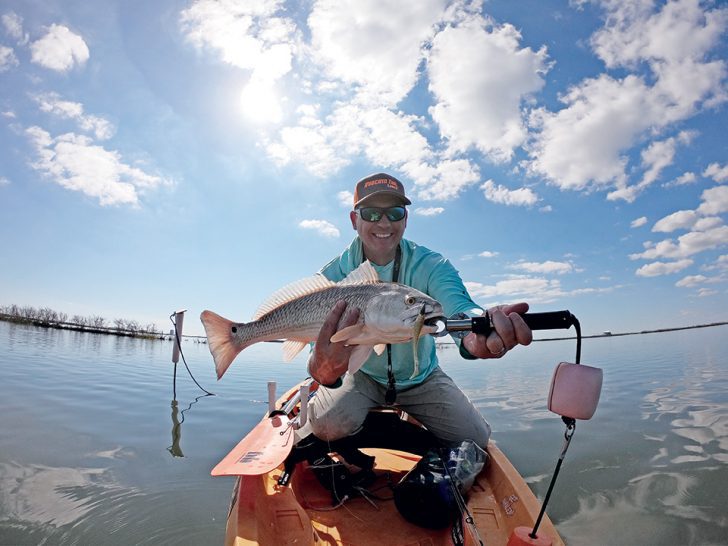 I witnessed a scenario a few weeks ago that when analyzed might help us all catch more fish.

I was fishing a familiar cove, drifting my kayak across grass flats mixed in with sand potholes. This area typically holds clear water, and on low-wind days such as this, it should have been exceptionally clear. The farther I drifted across the area, the more I noticed dinginess in the water. This area of the cove had a small island perpendicular with the shoreline and a 15-yard gap in between. I saw small mullet pushing up on the edge of the island.

At that point, I decided to anchor my kayak and work the area thoroughly with my rattling soft-plastic paddletail. This area was 1 to 2 feet deep and mostly carpeted with grass with just a few sand potholes.

To keep from fouling my jig on the grass, I was burning the lure just under the surface. I unexpectedly hooked up with a nice redfish that came out of the water to inhale my copper and silver soft plastic! Due to the redfish mouth being on the bottom of their head, they put on a nice show while attacking a lure on or near the surface.

I caught a dozen or so reds in this area using the same retrieve, and about half of them came out of the water or created a whitewater attack to strike. I was also able to sight cast to a few that swam through in groups of two or three.

As the bite started to taper, I noticed the water had begun to clear up. This led me analyze the situation a little more. This area is not known for a lot of tidal movement, and typically you can’t see the water move, as was the case on this day.

However, the tide was incoming, which created the silty water, and this slight movement was also pushing the small mullet against the island. Once the water cleared, I realized the tide had slowed or stopped, and as that happened the mullet began to scatter through the cove. I still managed to pick up a few more reds and some trout, but not until I started to drift other areas of the cove.

Hindsight is 20/20, and I didn’t put all the pieces together until the end, but it was a great lesson I will use in the future. Even though I could not see the movement of the water, the dirty water was a clear sign of the incoming tide. The bait was reacting to the rising water, and that’s the reason the fish were feeding in that area.

I hope this story helps you out in the future. I will remember what I learned that day and apply it.

Capt. Michael Okruhlik is the inventor of Knockin Tail Lures, Controlled Descent Lures and the owner of www.MyCoastOutdoors.com.