To witness, and especially catch, one of those unique creatures, however, is rare. Yet it happened recently for Rocco Mansueto on the Tennessee River.

Capt. Jellison routinely fishes on the Tennessee River near Chattanooga. His clients had already enjoyed a successful day, including a 27-pound blue caught by Rocco’s brother, Phillip, when Rocco hooked up again on a respectable catfish. 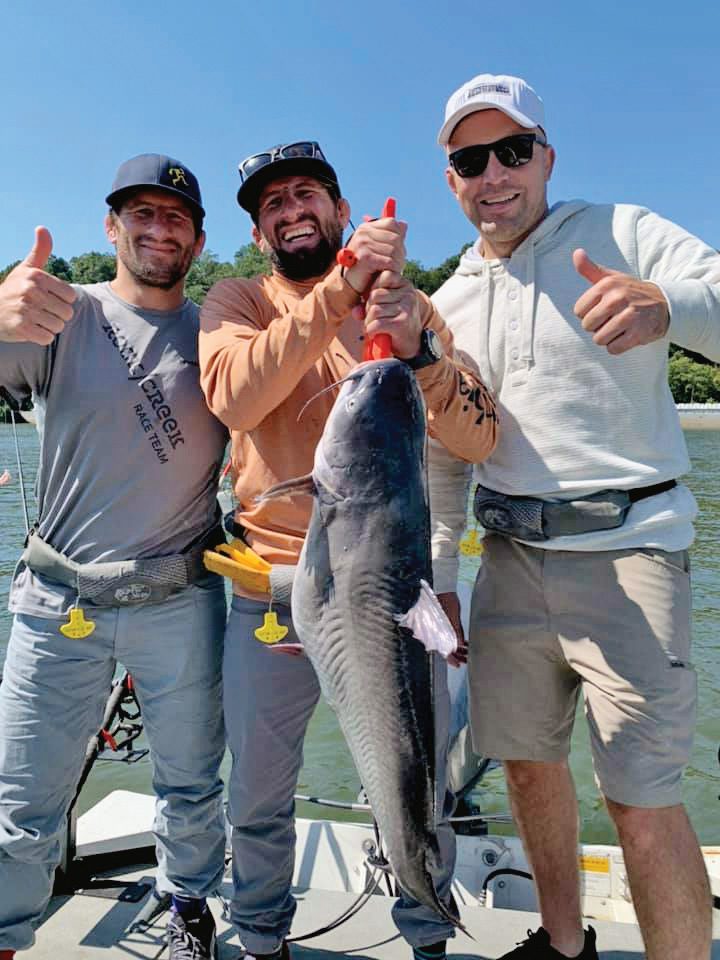 When they fought the fish close enough to the boat to see it, Capt. Jellison, who has boated thousands of catfish, said he was awestruck.

“Piebald catfish are quite rare. There’s one-in-a-million chance of getting one,” said Capt. Jellison. “They are actually blue catfish with a genetic mutation. I told Rocco many (or most) fishermen will fish their whole life and not catch a piebald catfish.”

Piebaldism is the absence of melanin-forming cells (melanocytes) in certain areas of the skin. It is different from albinism, where all cells lack the ability to produce pigment altogether. Hence, piebald creatures do not have the pink eye characteristic of albinos.

The piebald gene is often hereditary. Another Scenic City Fishing guide, Capt. Sam Simons, caught a similar fish in 2019. While it appeared to be a totally white albino, it did not have the characteristic pink eye, hence was probably a piebald as well.

At the time of the catch, Capt. Jellison was drifting chicken breast as bait in the Tennessee River current, what Scenic City guides refer to as their “light tackle technique.” They use standard spinning gear and relatively light line (10-pound mono or 20-pound braid), which allows the bait to drift more naturally.

Even though they use light tackle, the technique sometimes produces big catfish—up to 50 and 60 pounds. However, trophy-sized catfish are not as rare, or as cherished, as a once-in-a-lifetime piebald.

Mansueto released his rare piebald catfish back into the river in hopes someone else might someday have the same experience he did.

Richard Simms is an outdoor journalist and owner/guide at Scenic City Fishing Charters in Chattanooga, Tenn. Check them out at www.sceniccityfishing.com.