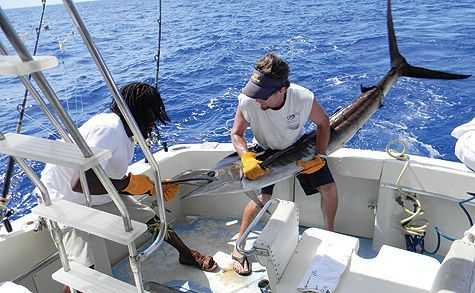 Growing up and fishing in South Florida, I remember seeing old photos of proud anglers, and while driving down A1A to the charter boat docks, seeing sailfish hanging upside down on the catch-board back at the docks. Even as late as 1983, when I got a part-time job on a sportfishing charter boat at Pier 66 Marina in Ft. Lauderdale, it was okay to take sails back to the docks. I also remember that catching one or two fish was really a good day; oh what a difference 30 years makes!

Having fished the same 30 mile stretch of Exuma over the last 14 years, where catching sailfish didn’t even qualify as a catchable species, I know of only three or four sails caught during that time period. Fast forward to the present: in the last nine months, Fish Rowe Charters has caught five sailfish, with one weighing well over 100 pounds; the most recent was this past January. These were all caught trolling, not even fishing specifically for sails.

Could the efforts of South Florida fishermen and conservation groups, such as the Stuart Sailfish Club, founded in 1941, and the efforts of The Billfish Foundation, be working? I would like to think so! You only have to look at tournament catch and release numbers. Fifteen years ago, boat totals were about 10 sails to place in the top three for a two-to-three day tournament. Today, these pros are catching 10 and better a day!

I guess it’s time to break out the kite rigs and fire up the live well to see how many there may be around Exuma. If you are catching sails in The Exumas, shoot me an e-mail, and I will start keeping track and let you all know. Mother Ocean is a complex system, and there may be other factors contributing to the increase in the number of sailfish caught in the Exumas. However, only time will tell, as more research needs to be done.

Editor’s note: For decades, Stuart, Florida, has been known as the “Sailfish Capital of the World.”  Also, the area of the Gulf Stream between Ft. Pierce and West Palm Beach, Florida is known as “Sailfish Alley.”  During the 2011 and 2012 tournament season the sailfishing was nothing short of spectacular!  Here are the results from just three tournaments held between the end of November and the beginning of January.