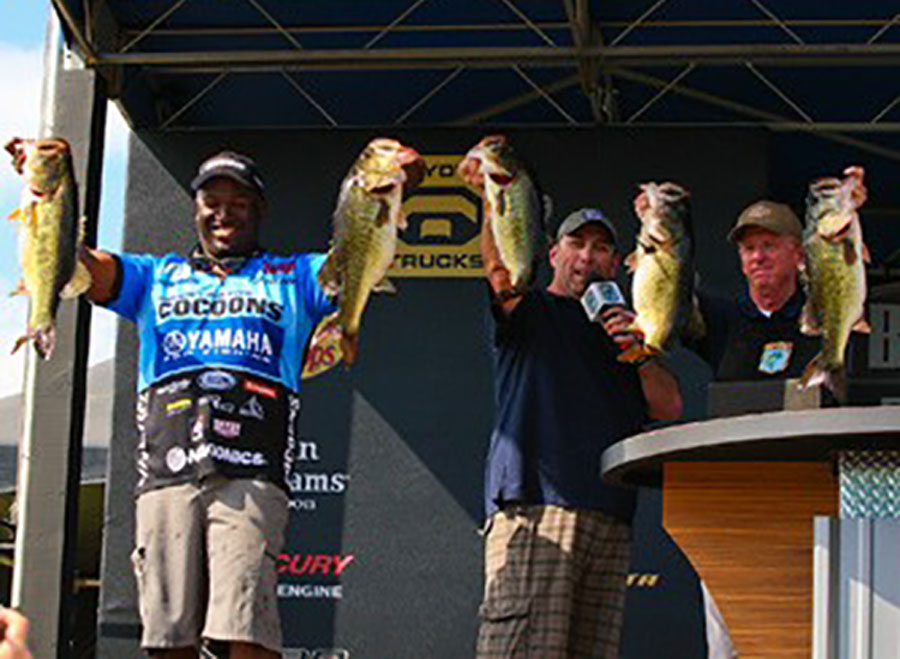 For fans of professional bass fishing, the return of the Bassmaster Elite Series to Lake Okeechobee on February 23 – 26 provides an opportunity to meet and greet some of the best professional fishermen the sport has to offer.

The Bassmaster Elite Series is the sport’s highest level in professional bass fishing tournaments. For the 2017 tournament season, 111 anglers will compete in nine tournaments through-out the nation for a shot at the Bassmaster Classic in 2018.

To qualify for the Elite Series, the top 70 anglers in the previous season automatically requalify for the coming season. Then up to 15 anglers from Bass Pro Shops Bassmaster Open tournaments and one qualifier from B.A.S.S. Nation will receive invitations to join the 2017 field. The remaining slots needed to complete the field of 108 anglers are awarded based on AOY rankings for each year of an angler’s carrier. For the 2017 field, three special exemptions were accepted to bring the total count to 111 anglers. Two of the exemptions were ‘Legend Exemptions’ which went to 1982 Classic winner Paul Elias and David Fritts who won the 1996 Bassmaster Classic and the 1997 Forest Wood Cup.

This year the season gets off to an early start with a Bassmaster Elite event at Lake Cherokee in Knoxville Tennessee on February 9-12. Two weeks later they come to Lake Okeechobee after which the anglers take a break for the 2017 GEICO Bassmaster Classic in Houston Texas on March 24-26. The Classic and two other marquee tournaments in the Series, the Toyota Bassmaster Texas Fest and the Toyota Bassmaster Angler of the Year Champion, each offer a purse of at least $1 million. So it is expected that the Okeechobee event will be the final tune up for these premier events.

The last time the Elite Series called upon the Big ‘O’ was the 2012 Power-Pole Slam in which California pro Ish Monroe won the 4-day event with a weight of 108-5 lbs which happened to be the fifth largest in trail history. During the first two days of the tournament Ish Monroe was on fire with the Day-1 and Day-2 top bags of 34-5 lbs and 24-15 lb. But on Day-3 the winds and the Big ‘O’ turned on Ish and allowed Chris Lane to make up a 14 lbs deficit to come within 9-oz of the leader going into the final day of the tournament. On Day-4 the last day of the tournament, Ish headed to untested waters in Pelican Bay on the south end of the lake. After a slow morning start the bass began to cooperate allowing Ish to bring to the scales a bag weighing 30-15 lbs which secured him first place and the top prize of $100,000. As for this year’s event, we’ll just have to wait and see what surprises the Big ‘O’ has in store for the anglers.

Among this year’s anglers, Florida is represented by Drew Benton of Panama City, Shaw Grigsby Jr. of Gainesville, Koby Kreiger of Bokeelia. Bobby Lane of Lakeland, Cliff Prince of Palatka, Bernie Schultz of Gainesville, Terry Scroggins of San Mateo, Randall Tharp of Port St Joe, and Jesse Tacoronte of Orlando who is making his rookie debut.

An Elite Series event attracts thousands of bass fans from around the country. Some come with their boats to follow the anglers while others come to rub elbows with the pros after a day’s weigh-in. To provide activities for both young and old, Bassmaster and the event’s sponsor, Okeechobee County Tourist Development Council, will provide games, interactive activities and exhibitors at C. Scott Driver Park where the weigh-ins will be held. So plan for a full day of fun and fishing excitement.

The Bassmaster Elite Series brings some of the nation’s best fishermen into our community. It’s an event that all locals should visit and support. See you there!