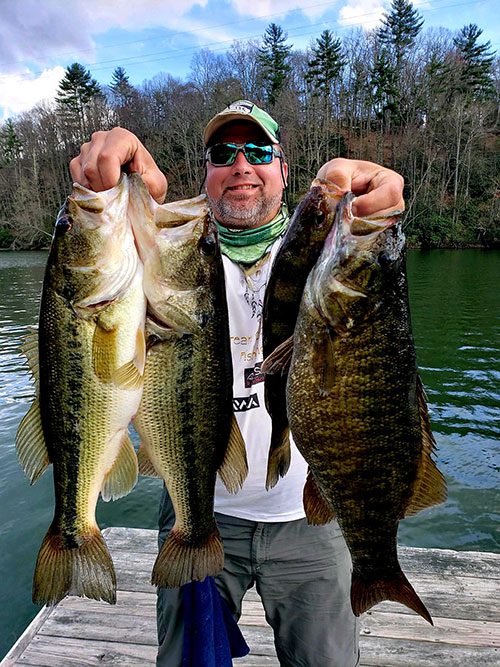 Many anglers wait all year for bed fishing. It is definitely the time to catch the fish of a lifetime. Each season, you can build your technique to a science. It is a changing of the gears, if you will. I believe this is one reason why anglers enjoy bed fishing so much. The monotony of chucking and winding can make it feel like a grind.

New technologies, such as power poles and GPS spot-lock, have changed the game a lot. It is almost not fair for the bass. Even the lures in the last decade have gotten so realistic with the import of baits from other countries. The choices are endless. The best of the domestics are the hand made baits here in America with the best imported being baits from Japan. They do come with a bit of sticker shock but if you’re at the top of your game then you won’t loose lures like you did in the beginning.

During this time, bass will not eat for substance; they only bite out of territorial aggression. This is why they gorge on forage in the pre-spawn. Iodine in crayfish helps the females break those egg sacks before they lay eggs. This is why we use red in the pre-spawn as well. It is a good way to just go after the females. The game of bed fishing consists of catching the male and to getting the females to bite. You have to put the male in the live well in order for her instinct to protect the nest to kick in. Then you’re ready to catch the female.

Now the deal with tournaments during this time has two camps with one saying they are fair game and another saying it harms the process of making the next generation. I am starting to see the rules changing for the better so we can have it both ways. Putting the bass in the live well to go to weigh-in, I will say, is definitely not good. The rule I am seeing now is that weighing in on the boat with an official to document the catch, is a great direction the sport needs for conservation.

Spring is the super-bowl of fishing seasons. Have fun this season and keep learning. The balance of nature is in your hands.

Scott Norton is a Western North Carolina native. Born in Asheville, N.C., he is a long-time hunter, angler and weekend warrior.