A few months ago, the owner of Kayak Excursions, Stefan Kuenzel, contacted Keep Lee County Beautiful to report he was concerned about monofilament he observed on “Bird” Island.  The site Stefan was referring to is a small mangrove island just west of the Matanzas Pass Bridge.  Anyone headed to Fort Myers Beach can look to the right while crossing the big bridge and see the island.  I have heard locals refer to it as “Bird, Pelican, and Rookery Island.”  It turns out its “official” name is Matanzas Pass Island. 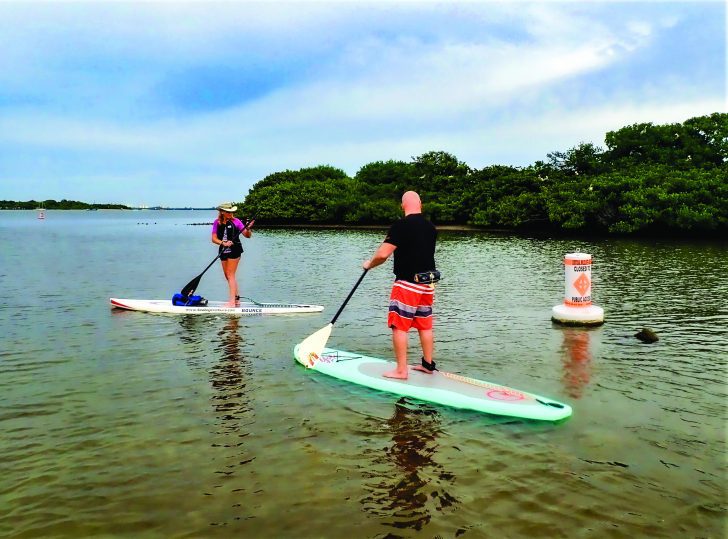 Normally, removing monofilament from the mangroves is encouraged, but we know this island is a bird rookery and there are boundary markers designating it as a Critical Wildlife Area (CWA).  Access beyond the markers is not allowed by paddlers or boaters.  We emailed Florida’s Department of Environmental Protection to inquire if a cleanup under their guidance would be allowed.  Estero Bay Aquatic Preserve staff responded with an email that explained why our good intentions may cause more harm than good.

The island is cleaned annually by preserve and FWC staff, along with all the other rookery islands in Estero Bay. Clean-ups are scheduled during the “off-breeding season” later in the year in order to minimize disturbance, as human activity on or near an active rookery island has the potential to flush birds off of their nest and expose eggs/chicks to over-heating or predation.  Matanzas Pass Island is challenging to clean because birds seem to be nesting there throughout the year.  Subsequently, a small group of staff is used.  Large groups of volunteers increase the stress for the birds and may cause considerable unintentional harm to the chicks.  In addition, any activity on or within the CWA is prohibited, including canoeing/kayaking and even casting fishing lines into the boundary. DEP maintains a permit from FWC for accessing and conducting clean-ups on all of the CWA islands.

There are several CWA islands along the Calusa Blueway identified by boundary markers. Every paddler I know cares about wildlife and wants to help.  Regarding CWAs, the best way to help the birds and rookeries is by staying behind the boundary markers and contacting CROW (Clinic for Rehabilitation of Wildlife).