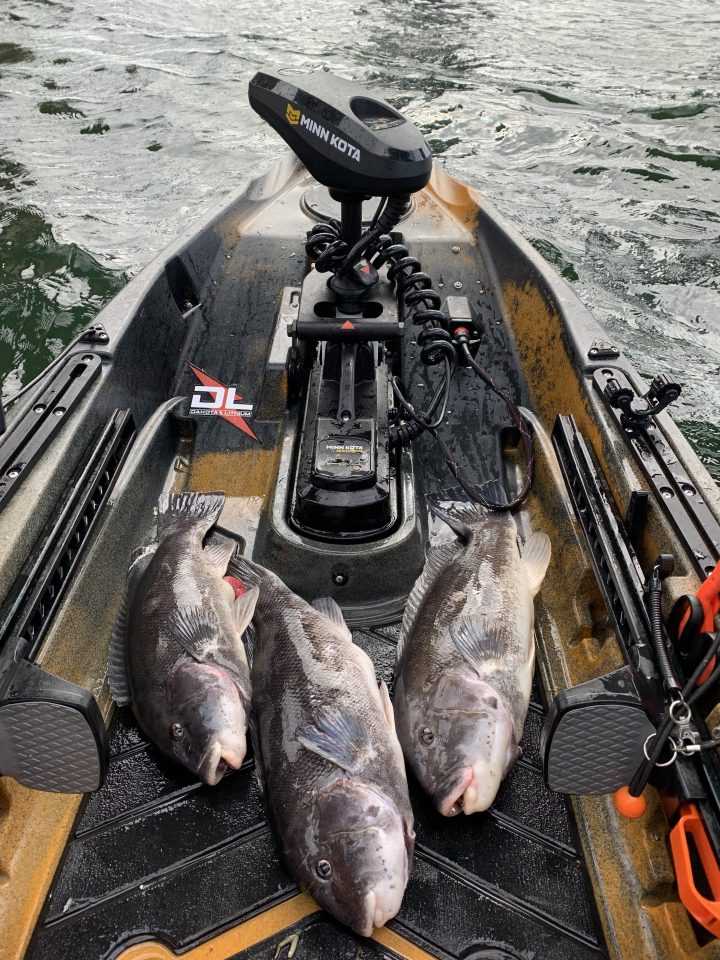 Tautog are pound for pound some of the hardest fighting fish in our northeast waters. Anglers are often willing to endure cold temperatures, numb hands, and boats littered with crab guts for their chance at a trophy Tautog. Why? Firstly, tog are delicious, and some even say the best tasting fish in our waters. Furthermore, they are absolute tanks of the ocean. Once you set the hook into their leather-like lips, it’s a straight up battle for who is stronger. The first few seconds after hookup will usually establish whether or not you have any shot at landing that fish. Tautog are notorious for “digging” back into the structure you just lured them out of, shredding 50lb leader line and your sense of pride simultaneously. This “welcome to togging” moment is a right of passage, and one we all experience. So, with that in mind, how do you get set up for your chance to tangle with these bulldogs? Let’s start with anchoring.

Anchoring in the perfect position over or alongside structure, like boulders or jetties, is one of the most important aspects of targeting Tautog. If you anchor even as little as 5 feet off the hot spot, you may be going home empty handed while the boat or kayak next to you is bailing them over the rails. Having to pull anchor and reposition multiple times during the day or a tide can sometimes be necessary, and just as frustrating, as hooking one of these bait stealing champions. Therefore, a Spot-Lock powered kayak such as the Old Town Autopilot 120 has become a kryptonite for big tog, giving you an advantage that even boats might not have.

Kayak fishing for Tautog is becoming more and more popular, and with good reason. Kayaks can reach structure that boat owners just aren’t willing to venture into. Pair that fact with the Spot-Lock technology built into Old Town’s Sportsman Autopilot kayak powered by Minn Kota and you have yourself a tog fishing machine! With just the press of a button, the Old Town Autopilot uses your GPS coordinates to keep you right on target all day. Eliminating the need to pull anchor and reset is a complete game changer. Why? Well, this leaves you extra time, energy, and stability to concentrate on finding and landing these bulldogs of the ocean. If you have yet to set hooks into a big tog, well, just one of those fish will show you just how valuable extra strength and leverage is when battling a hefty white-chin. With the addition of the Minn Kota Heading Sensor, you also unlock the ability to utilize the “jog” feature. This feature enables you to move in 5-foot increments along structure and gives you the advantage of quickly dialing into areas where the big tog live. 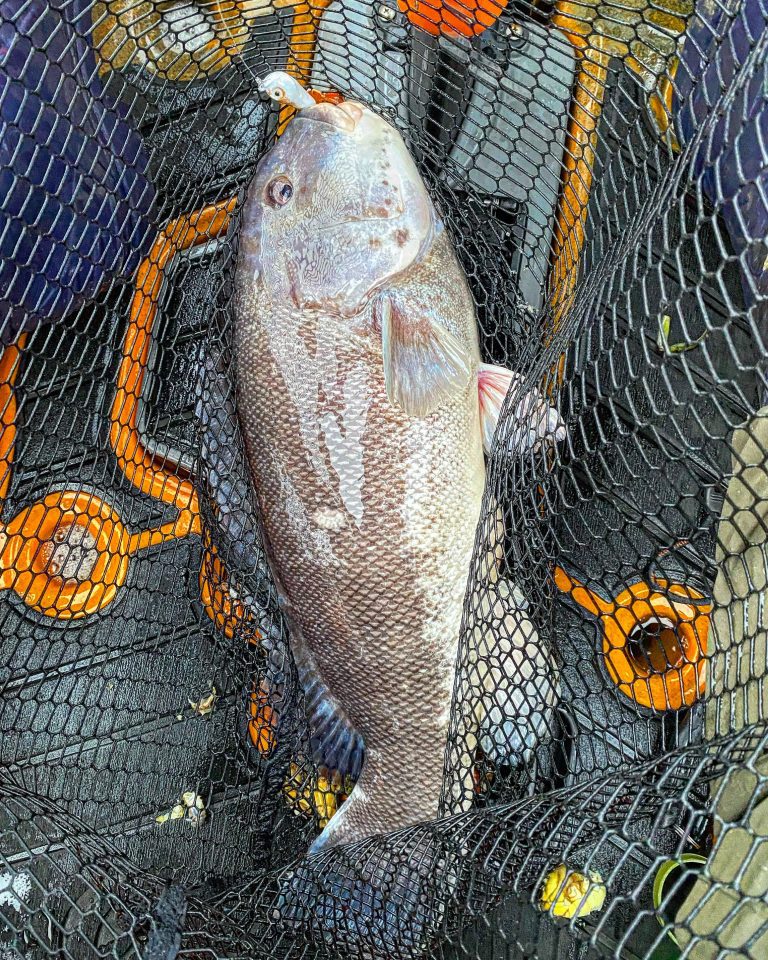 When targeting tog from the kayak, it’s best to keep it simple. A high-quality blackfish jig such as the ones from Asylum Jigz or S&S Bucktails paired with green crab has become the tactic of choice for many anglers. Traditional blackfish rigs definitely work, but they sometimes can be bulky and weighty. I personally like the Tide Rite R451 Blackfish Rig, but any standard blackfish rig will work. With a jig, you can feel almost every little bite, and that can be the difference between limiting out and going home hungry. Some of the biggest fish I have caught created just a small tap at the end of my rod. This is just one of the amazing things about black fishing. When you set the hook, you have no idea how big the fish is at the end of your line. However, soon after that tug-of-war begins, you’ll find out! 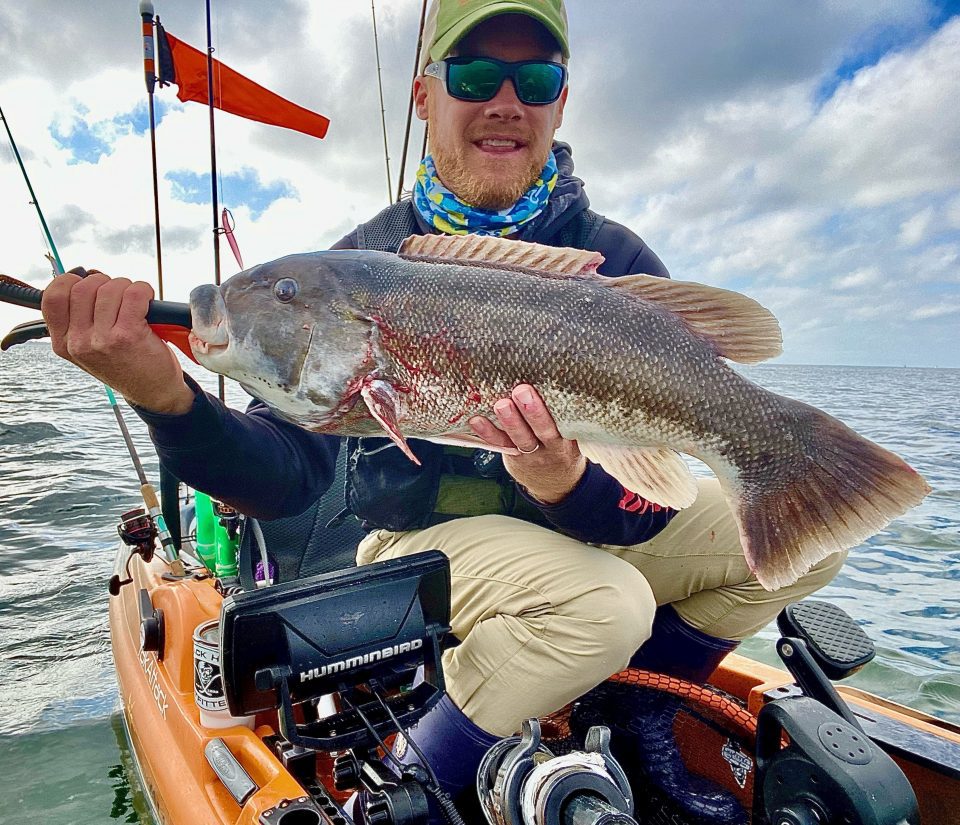 In order to pull these fish out of the jagged structures they call home, a fluorocarbon leader no less than 4 feet long and with test no lighter than 40lb should be used. This leader should be tied to braided main line with your favorite line-to-line knot like a Double-Uni Knot or an Alberto Knot. Personally, I prefer 6 to 8-foot leaders of 50 to 80lb Seaguar fluorocarbon. Sure, you can land the small to medium-sized tog with lighter line and leader, but when you lock into that giant you’ve been after, you want the best shot you can get! The way these battles play out, vertically and near heavy structure, are another aspect of black fishing which makes a kayak the perfect platform from which to target them. The stability offered by the Old Town Sportsman line allows you to turn or stand while fighting a big tog. If your line is inches away from a barnacle encrusted rock, every bit of extra leverage is crucial! Additionally, the Spot-Lock feature will help you remain in the hot zone, even while getting dogged by a monster tog.

Another common talking point surrounding Tautog is finding the perfect rod and reel combo to tame the deceptive beasts. There are numerous combos out there that’ll do the job but I personally prefer using a Maxel Platinum Slow Pitch conventional rod in the 7ft heavy configuration paired with a Maxel Hybrid jigging reel in either the 20 or 25 size. Between the incredible 28lbs of drag on the reel and the 2-5.25oz weight capacity on the rod, this combo can battle Tautog almost anywhere with ease. If you’re more of a fan of spinning combos to get your hogs, Maxel also makes the platinum in a spinning configuration! Paired with a Daiwa BG MQ or Saltist MQ in a 5000 size, it’s hard not to have fish jumping in the boat. The key to picking your rod and reel combo is to find a rod that has great tip feel with plenty of backbone. Shorter rods with heavier actions are an absolute must! As for reels, heavier duty reels with plenty of drag and line capacity pair perfectly. Typically, you want to have no smaller than a 5000-size spinning reel as a massive hog can easily wipe out smaller reels. In the conventional world you have 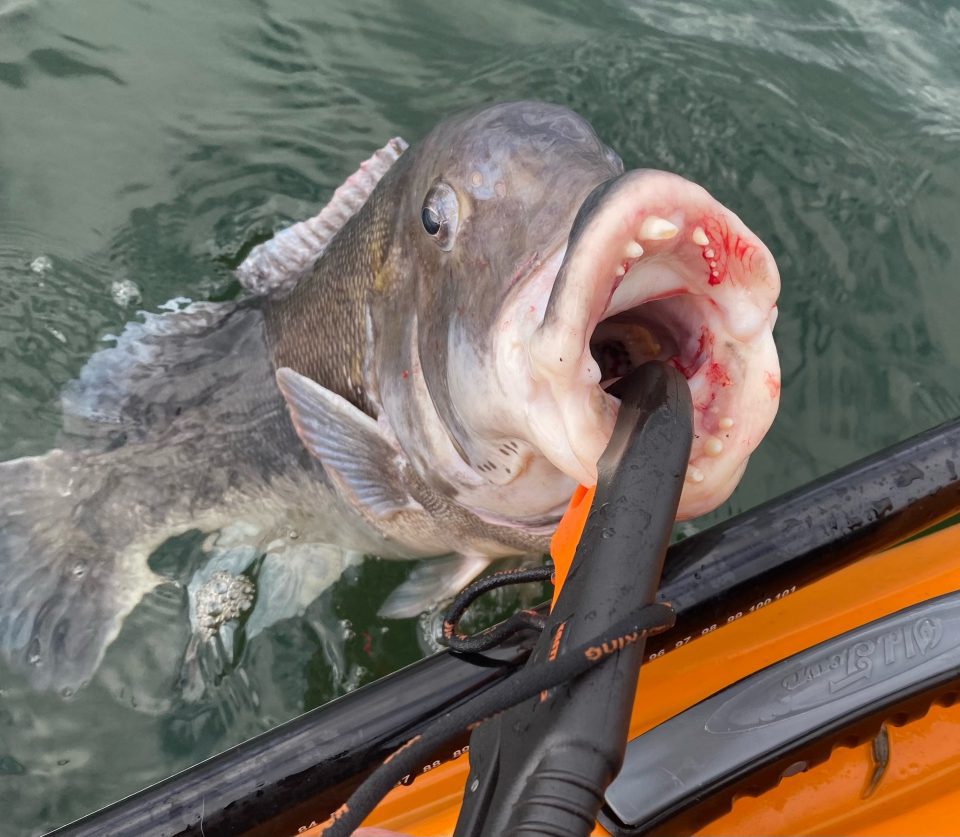 a bit more flexibility as size is less of a concern. Generally speaking, almost any conventional reel will work for Tautog however, lever drag reels can make the constant dropping of your rigs less monotonous and time consuming. A fairly recent and popular option in the conventional world is the use of bait casters as bottom fishing reels. The concept behind this is the ability to quickly free spool your line at the push of a button rather than messing with your lever drag settings. If you’re interested in going down that route, I would recommend something like the Daiwa Lexa WN in the 400-size due to its relatively high drag and line capacity.

Tautog are professionals at stealing your bait with just the slightest tap, so be prepared with plenty of extra bait onboard. The most common baits anglers’ use are green crabs or Asian shore crabs. Cutting them in half with scissors like the Baker 9” Stainless Steel scissors can be useful at providing some scent in the water and getting the bite going, but once you start to see some action, try switching to a whole crab if you’re after the trophy. Sometimes, a consistent bite of small or medium sized fish will suddenly slow. Don’t move quite yet! That is sometimes a sign that a big fish has just moved into the area and you may be seconds away from a double-digit monster!

Tautog season is a highly anticipated but brief bite which often provides one last stretch of heavy fishing action before water temperatures drop and snow begins to fall. To maximize your last few weeks on the water, you’ll want the most high-quality tools possible at your disposal. This is where an Old Town Sportsman kayak comes into play. Still have questions? Come see us at Black Hall Outfitters, 372 Boston Post Road, Westbrook, Connecticut. We will get you geared up and on the water, ready to take on a monster tog!