The old myth that snook shut down during cold weather holds true when the water temperature drops below 65 degrees.  Capt. Eddie Caldwell, a good friend and part of the S & I Charters group, has a technique for catching them during the cold months. 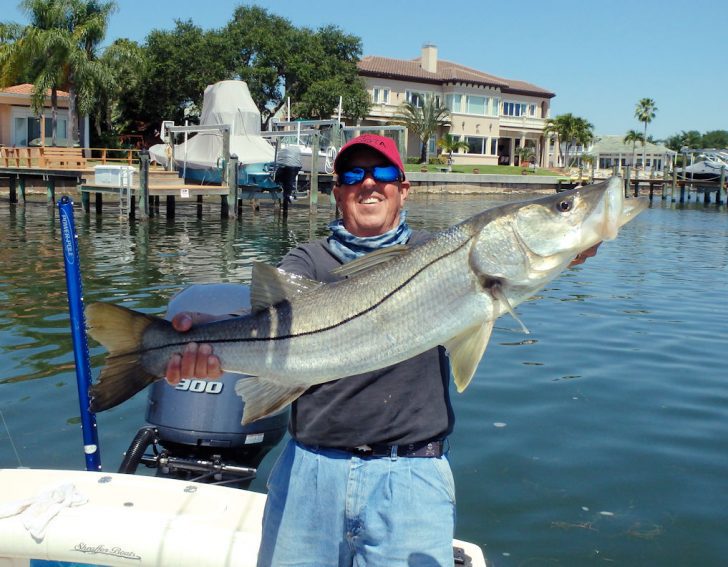 Capt. Eddie invited me along to go after some big winter snook using his technique and, before he could finish his invitation, I asked him when and where.  I suggested we bring along the camera crew and film it for a TV show. We set a time and place, agreeing not to show any of his favorite fishing spots.

Saturday morning arrived and the winds were blowing from the northwest with temperatures in the mid 60’s and dropping, as the cold front approached.  Capt. Eddie explained that his technique works best with a falling tide and the water temperature no lower than 60 degrees.

His method is to troll canals using one of his favorite snook lures, the Yo-Zuri C-7, a small but killer lure for snook and trout.  We picked a black back and silver sided one, tied to a 30-pound test leader about 30 inches long.  We used a 7-foot medium action spinning rod and reel combination.

A short trip from the boat ramp and we were ready to fish. As we entered the first canal, we cast the lures about 25 feet behind the boat and held the rods outward and down as if they were outriggers.  The secret is to keep the tip of the rods down and away from the boat and watch the tips of the rods for movement from the lure. Yo-Zuri lures have a wobbly movement and, in some cases, the lure can pick up some bottom trash that will stop the wobbling or cause it to come to the surface.

After a few minutes of trolling, our first hit was a small 8-pound snook. Then, as we made our turn into the next canal, I had a hard tug. For a minute, I thought I had struck bottom, but the bottom moved and I realized this was a very large snook. Capt. Eddie took the motor out of gear and suggested I put a little more pull into catching this large snook, or take the chance of losing him if he made a dash for the nearest dock. Shortly after, I had him at the side of the boat, and he was ready to give up the fight.

We were back at the dock by noon not only with the largest snook weighing in at 17 pounds but, also, in time to watch the football game. That day, Capt. Eddie made me a believer in trolling for snook.

When: Fish ahead of a cold front for best action.  Falling tides work best.

Please be polite to the homeowners on the canal and respect their privacy. Keep the noise level down and our waters clean.

In The still Of The Night

Boy Bitten In Face By Shark Off Florida Coast While Lobstering