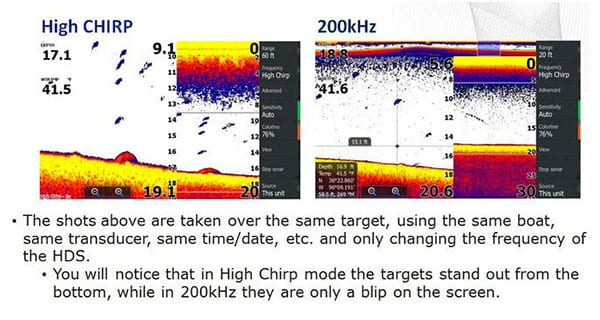 One of the most asked questions we get in our SONAR classes is what is CHIRP? CHIRP (an acronym for Compressed High-Intensity Radiated Pulse) is a game changing technology that has been used by the military for decades in both radar and sonar. Instead of pinging a single frequency like traditional 2D sonar, CHIRPing devices transmit a sweeping range of frequencies. It’s not so much a new type of sonar but rather a better way to process and display traditional 2D sonar.

CHIRP Sonar was developed in the 1950’s as a military technology, and it’s recently been introduced by all the major fishing electronics manufacturers, but there has been precious little information produced about what CHIRP sonar is, what it does, and how you can use it to catch more bass.

CHIRP uses bursts of different frequencies, and units with CHIRP technology are able to compensate for inconsistencies in the way different objects and materials reflect the sonar pulse. By scanning over multiple frequencies, CHIRP units can produce much more detailed images than non-CHIRP units.

Here is a good way to learn how these technologies can help anglers. Spilt the screens on SONAR; one with 200 kHz on one panel and on the same panel add a HIGH CHIRP. Now anglers can see the benefit of what the differences are with these two panels side by side.

How can CHRIP help you catch more fish? Adding CHIRP sonar to your electronics suite will provide measurable gains to a number of important aspects of a sonar image. One of the most impressive things that CHIRP does for anglers is that it provides anglers an unprecedented representation of the water column and a much better picture of bait in the water. With CHIRP, anglers have been getting target separations of less than two inches, making it easier to differentiate their weight and bait while drop-shotting. Having that level of detail gives anglers a much better idea of how bass react to their baits.

Another huge improvement CHIRP technology provides is in image clarity, which can be a big deal for ledge fishermen that frequently try to categorize the images of fish on their units. CHIRP sonar will also allow anglers to better understand how game fish relate to baitfish and distinguish predatory fish from the image of the bait. CHIRP sonar allows you to see those predatory fish even if they’re inside a ball of bait or directly under it.

Here is a good example of CHIRP technology. The image accompanying this article indicates a brick on the bottom with two tennis balls attached to the brick. Regular 200 kHz beams see a “bump” on the bottom. The CHIRP beam sees “something” on the bottom. But, this is still a Sonar beam and at 20 feet deep the circle of sound on the bottom is only 8 feet in diameter.

Learn how to use your machines with our exclusive 8 Hour, ON THE WATER School on Lake Lanier. For more details, go to our website and look at the SCHOOLS PAGE for ALL the details or call 770-889-2654. For a FREE SONAR SET UP SHEET to get you started for ANY sonar machines; send an email to kensturdivant@att.net and tell us what machine you own. Screenshots courtesy of Lowrance.

Ken Sturdivant is a member of the Lowrance Pro Staff. You can find him at 770-889-2654; www.southernfishing.com, or kensturdivant@att.net.