The shout sounded Cajun, or perhaps like the intro to a mariachi tune. Either way, it amplified the chaos on deck.

Three rods were bent. Two anglers scrambled around each other to uncross lines screaming off reels. A third angler dove to wrap an arm around the 10-year-old who held a death grip on rod number three. It was a toss-up as to whether the kid would lose the rod or if the fish would yank him overboard into a very active chum slick.

The whole scene unraveled when a 10-foot tiger shark rose to the surface like a 500-pound rainbow trout. It smashed the boy’s cobia straight through the surface, blowing up close enough to drench us, maybe 15 feet off the stern.

The boy’s rod jerked down between the twin outboards and snapped. There was stunned silence, then…

Man, what a trip. It was a lot more than my two brothers and I expected upon reconnecting with a childhood friend in Bluffton, South Carolina. Our captain, Keene Reese, is a successful real estate agent with Ussery Group, Charter One Realty in the Lowcountry. He is also a very fishy dude. In mid-June, he invited us—along with my 10-year-old son—on a 20-mile wet rollercoaster ride offshore, where cobia were thick on a well-known wreck.

With a beautiful chum slick snaking off the stern of Reese’s 25-foot Regulator “Copacetic,” it didn’t take 10 minutes for “brownies” to start showing on the surface. They arrived tailing some big sharks, and there was no need for down-lines that day. All the action was on top, visible and simple. Pitch a live menhaden out on a freeline, and a cobia would take it before you had time to put it in the rod holder.

Over the course of a few hours, we boated well over a dozen cobia, although the action came in such crazy spurts that no one could keep count. My son also caught a nice kingfish, which required some assistance during the initial blistering runs. 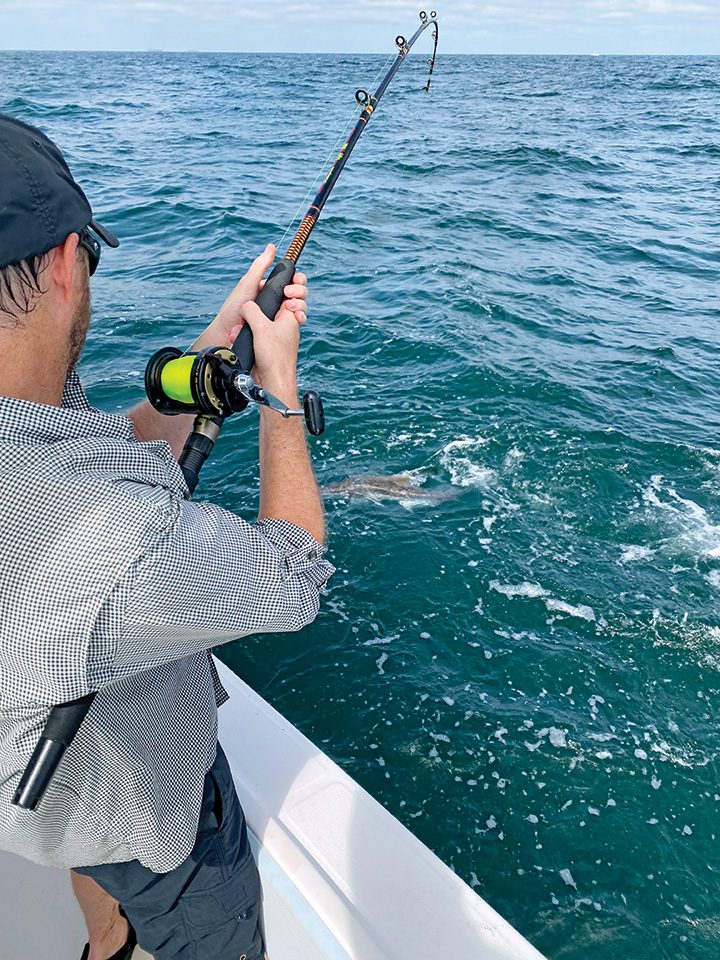 The thing is, we only landed four cobia longer than the 36-inch minimum length limit. We saw some large ones, but the short fish were definitely more numerous. That’s good news, according to Mel Bell, the director of Fisheries Management with South Carolina DNR.

For decades, South Carolina was famous for its inshore cobia runs. Bell said May is the peak of a spawning run that once saw scads of cobia pushing into Port Royal Sound, Calibogue Sound, St. Helena Sound and the Broad River. Boats lined up to target big egg-bearing females before they had a chance to reproduce. The fishery collapsed.

“We were in a bad place in 2016,” Bell said. “The numbers were scary. Even the anglers were telling us we had to do something.”

While overall Atlantic cobia stocks are in good shape, according to the latest assessment from the Atlantic States Marine Fisheries Commission, Bell said spawners in South Carolina sounds are a distinct “sub-population.” The Southern Cobia Management Zone was formed in 2016 to protect these inshore-spawning fish. The zone stretches from Jeremy Inlet on Edisto Island, S.C. south to the Georgia border. It extends three miles offshore, and within this zone there is a one fish per person, three fish per boat daily limit—except in May, when cobia harvest is closed. The limit in federal waters is one per person, six per boat. Offshore, nearshore or inshore, there is a 36-inch minimum length limit, which brings us back to all those short fish.

Bell said South Carolina DNR isn’t ready to release any hard data. However, he’s heard fishermen reporting lots of smaller fish, which are likely in the age classes protected since 2016. If anecdotes translate into survey data, it would mean the restrictions are working. Bell said next year might be time to take a close look and see just how well cobia are returning to the sounds.

For more information, go to www.dnr.sc.gov.