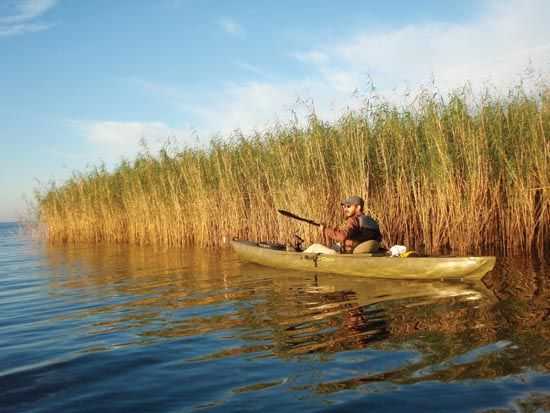 The fishing, shrimping and crabbing village of Cocodrie is located where LA Highway 56 abruptly ends deep in the heart of Louisiana’s fabled saltwater marsh. Mention the word Cocodrie to any saltwater fish-chasing Louisiana native and you’ll likely get that faraway look of desire that comes from knowing that even in a marsh habitat as massive as Louisiana—this is one very special place to go fishing.

I had been watching the winds and weather closely for a couple of weeks, looking for the perfect day to take the two-and-one-half hour drive down Hwy 90, through the town of Houma, then “down the bayou” to Cocodrie. After what seemed like an endless drive through many miles of marshland, my friend Joe Vidrine and I finally pulled in to the huge parking lot at Coco Marina.

Besides being home to a ridiculous number of redfish, one of the great things about Cocodrie is that you don’t have to paddle far to find fish. We were headed for a circuit I had in mind for that day. I felt this route would protect us from the southeast wind and give us a great shot at some reds. 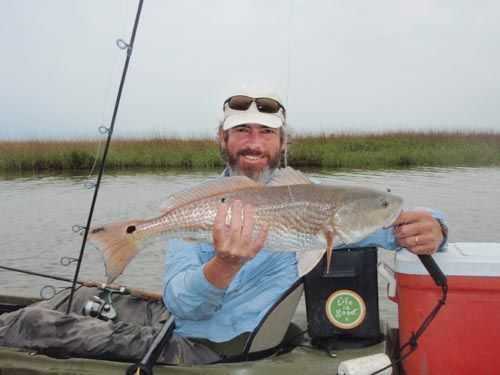 As we paddled towards our circuit, I suddenly heard that unmistakably powerful sucking/smashing sound that is a dead giveaway for a redfish taking a baitfish off the top of the water. Let me tell you—this sound can make a shallow water fisherman absolutely weak in the knees. I quickly stood up in my kayak to see if I could spot where the redfish had hit the bait. No sign of rings on the water or bubbles was apparent, but now I knew that there were fish in the area—and that they were feeding on top.

Joe and I spread out and began working the grass lines. I alternated between my topwater and my plastics rod—waiting to see which would work more quickly. I scooted around a marsh point and pulled up against the leeward side of the grass in my kayak. I shot a cast out that dropped the topwater plug about a foot away from the grass and then began working the lure straight back towards me. I counted, “1 and 2 and 3 and 4,” as I walked the dog along the grass line to keep my retrieve steady and slow. About halfway back the lure was hammered by our first red of the day—a 23″ beauty with a unique donut shaped spot on its tail.

A lot of people have the opinion that a redfish won’t hit a topwater lure. They’ll say that a redfish has its mouth on the bottom—perfect for crabs and minnows—but they’re not made to strike on top. Believe me—there’s nothing that could be further from the truth! As Joe and I fished and the tide began to flow the redfish began to hit the top water lures with reckless abandon.
I watched as Joe threw his popper to the back of a cut. As the lure passed alongside a small tuft of marsh grass, a redfish dropped the hammer on it. The ensuing struggle resulted in a gleaming redfish that seemed like it absolutely glowed in the warm April sun.

A few minutes later, I saw a group of minnows come up out of the water in the middle of the marsh pond we were in. Knowing that there could be a hungry redfish in pursuit, I threw my Spook Jr in the area. As soon as I started walking the lure back towards my kayak, ka-boom! The redfish missed the lure (as they often will in shallow water). The key in these situations is to not set the hook, but rather to keep your dog walking or popping pattern going until the fish hooks themselves and you can feel a weight on the line. The redfish hit the bait three more times before finally hanging himself on the lure.

As we worked our way further up into the deep marsh, we came upon a shallow pond of really clear water. I threw a Baby 1 Minus crankbait way into the back of a pocket. As soon as the lure landed, I saw a wake headed towards it. The 32” redfish that was making this wake was clearly visible through the clear water. I began to crank the little topwater diver back towards the kayak. The redfish followed—fixated on the lure. As the Baby 1 Minus got closer to the kayak, I became worried about the fish spotting me. I stopped the lure and it came back to the surface. The redfish stopped and watched. After a few seconds I started cranking again. As soon as the lure twitched, the big red flared its gills and literally sucked the lure off the top of the water. It was an awesome display of the ferocity and force of nature.

The action kept up all day until we had to head back to Coco marina. With a little sunburn, some sore muscles and some great memories, Joe and I headed back up Hwy 56 towards home. This was one of those truly exceptional days that happen once in a lifetime—unless you happen to fish Cocodrie, Louisiana regularly. This place truly is Kayak Fishing Paradise.