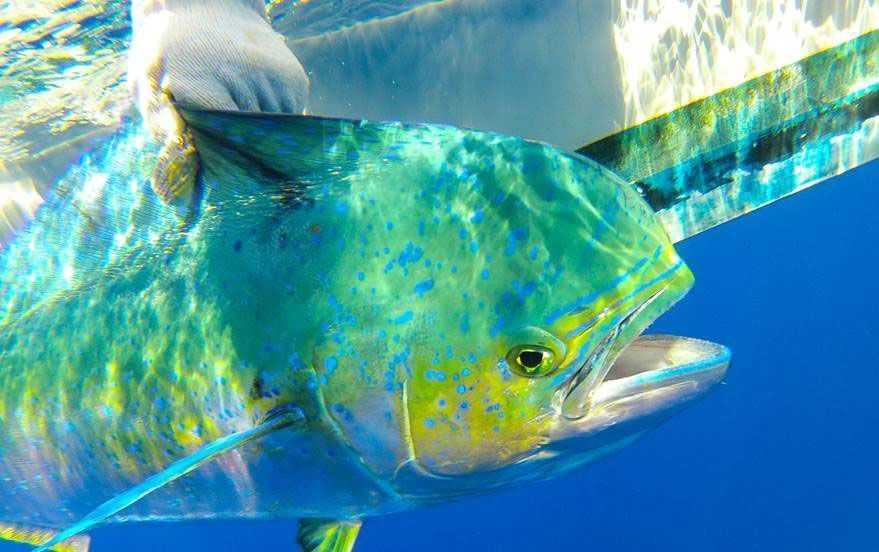 The early season dolphinfish bite is picking up in The Bahamas, with reports of mixed bag wahoo and dolphinfish catches throughout the Islands. To many anglers, seasonality is not a new concept. But what processes are driving this seasonality, particularly for dolphinfish—one of the most targeted offshore fishes from the Caribbean to the U.S. east coast?

Although dolphinfish can be caught year-round throughout most of its range, anglers would agree that prime fishing begins around March in The Bahamas, April in the Florida Keys and May in the Carolinas. Research by the Dolphinfish Research Program (DRP) supports this trend, providing new insight into where fish are moving and how regional currents may play a role in the direction of those movements.

Tag and release efforts by volunteer anglers, captains and scientists has allowed for the tracking of dolphinfish movements between the U.S. and The Bahamas. Small, individually numbered dart tags were implanted into small, unwanted dolphinfish or in fish caught after their cooler was full for the day. Dolphinfish that were originally tagged in The Bahamas were recaptured in Florida in as little as three weeks, and in the Carolinas between two-and-a-half weeks and two months later. One tagged fish was even caught off the Georges Bank offshore from New York 45 days after being tagged in The Bahamas. Dolphinfish also demonstrated some fidelity to The Bahamas; fish remained within Bahamian waters up to 77 days after initial capture, likely due to the currents and structure of the deepwater basins within the central Bahamas. Fish tagged in the U.S. exhibited varying migration times to The Bahamas, ranging from three weeks to 11 months.

What is dictating where and how fast dolphinfish migrate? Movements and time between recaptures both into and out of The Bahamas might be explained by regional currents. Surface drifters—buoys that float with the current and report their GPS location—have identified several circulating currents through The Bahamas and U.S. east coast. Short migrations from Florida to The Bahamas might indicate that fish are following currents from the Gulf Stream into the northern Bahamas. Longer time periods between being tagged in the U.S. and recaptured in The Bahamas can be explained by currents flowing north above Bermuda before looping back toward the Caribbean and Bahamas, a track that would take fish more than 2,000 miles in less than a year!

There is still much to learn. The DRP is teaming up with the Cape Eleuthera Institute to increase tagging effort throughout The Bahamas to better understand how The Bahamas’ deepwater basins and passages affect dolphinfish movement. Consider becoming a volunteer tagger to help conserve the recreational and commercial dolphinfish fishery in the Atlantic, Caribbean and Bahamas for generations to come.

For information on the Dolphinfish Research Program or to receive a free tagging kit, contact Zach Zuckerman at zachzuckerman@ceibahamas.org or the DRP at cssllc@bellsouth.com.

A dolphinfish is released in the Exuma Sound, a deep water basin in the central Bahamas. The orange tag in the dorsal muscle is quick and easy for anglers to implant. Phot credit: Owen O’Shea