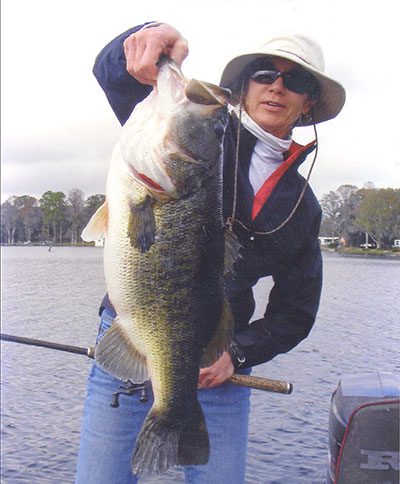 If you’re having trouble catching big bass in the cold, a remedy may be closer than you think. Across the country, many would agree that December through February is the worst time to fish for largemouth bass, but in many places in Florida, it is the best time to bass fish.

Life is slow in Dunnellon, Fla., a town of about 2,000 people located 70 miles north of Tampa. Largemouth bass like Dunnellon, and Capt. Keith Austin knows that. He’s been fishing here for many years. After moving to Florida in 1983 and achieving impressive tournament results, marinas and shops began sending clients his way. Soon he was guiding full time, and has been since 1989.

A trip with Keith begins with buying live bait (golden shiners) at Angler’s Resort. Thirty minutes later, you launch the Ranger bass boat in Lake Rousseau, a 3,700-acre manmade lake formed in the 1920s when the Withlacoochie River was dammed. The serpentine channel winding through Rousseau averages about 15 feet deep. And just off the channel, practically everywhere, the lake is land-mined with timber consistently close to the surface. The navigational challenges don’t go unnoticed, but sure make for great bass fishing.

Many assume live bait fishing is easy. This isn’t always the case with the golden shiner. With freely drifting bait (no cork), the shiner’s frantic tug feels like a plastic worm strike. The line twitches a lot, especially when the bait senses a predator. The technique involves keeping the spool open with enough tension that a strike peels line but the shiner doesn’t. Peeling line or a heavy swimming line indicate a probable strike. But discerning a strike is further complicated because the boat is drifting forward and the water is rife with timber. Peeling line could mean the bait swam around a log. Hang-ups are common, but made less frustrating by Keith’s ability to quickly change direction and de-snag.

You learn a lot about someone you fish with. A native of Winston-Salem, Austin was drawn toward bass fishing at age 12 when he caught a largemouth on a Rapala. His competence and self-confidence are evident, but he carries a modesty and a “no brag, just fact” persona that’s hard to question and easy to respect.

What is a trip with Keith like? This writer has fished five days with Keith and enjoyed every minute. Our trip last February involved a weekend trip. Fifteen good bass were caught on Saturday, including two 7-pounders and a 10-pounder. On Sunday, we caught 19 bass that weighed 80 pounds. We caught three over 7 pounds and doubled on a 10-pound, 1-ounce fish and a 9 ½-pound fish. Throw in pristine scenery draped with osprey, eagles, cranes, gators and hawks, and you’ve got a most enjoyable trip.

Contact Capt. Keith Austin at (352) 795-8665. The author, Mike McSwain is a smallmouth guide on the Broad River in South Carolina, www.broadriversmallmouth.com.