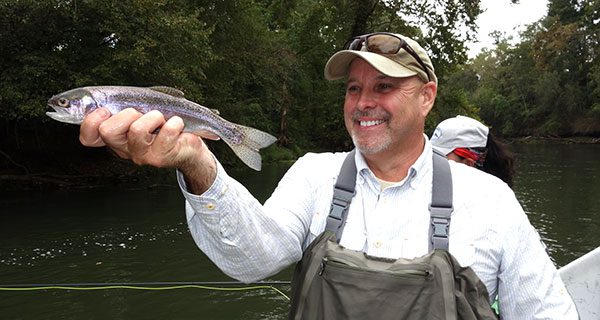 Submitted by ExploreTRV with John Felsher

Drifting along with only singing birds, chattering squirrels and striking fish breaking the silence, one could easily believe the Elk River flows through a vast wilderness, but the river courses through populated Middle Tennessee and Alabama’s Limestone County before flowing into the Tennessee River. The hot/cold treatment of water coming through Tims Ford Dam near Winchester, is carefully managed by the Tennessee Valley Authority to support a cold water trout fishery upstream of the reservoir and a variety of warm-water fish downstream.

“The Elk River is a system where people can catch good numbers of trout with a chance of catching a really nice one,” advised David Perry with Southeastern Fly in Murfreesboro. “We’ve caught some browns and rainbows in the 20-to-25-inch range. They would weigh about two to four pounds. In 2020, an angler caught a 30-inch brown trout that probably weighed about six pounds. We hear about some 10- to 12-pounders from time to time.”

Tennessee regularly stocks brook, brown, and rainbow trout in the cold waters closest to the dam. As water gradually warms farther from the dam, anglers can catch more smallmouth and largemouth bass as well as other species native to southern Tennessee. “We still catch smallmouth and even an occasional largemouth bass when fly fishing for trout within nine miles of the dam,” David said. “We’re doing more smallmouth fishing every year a bit farther down the river.”

Avid angler and sportsman, John Felsher joined David and Angela Millet from Lenoir City, Tennessee on a day-long, early autumn float trip. The group boarded David’s drift boat, a craft specially designed to accommodate a guide and two flycasters, just below Tims Ford Dam at Highway 50. The trip included a fabulous shore lunch, provided by Angela. John provided a report from his trip. “We drifted gently with the current nine miles to Farris Creek, catching browns and rainbows along the way. As we fished, we spotted various birds and other wildlife including a bald eagle. Twice, we even saw mink, animals few people ever see.” “If one is ever inclined to see ‘Gods Country,’ take a drive to Tim Fords Dam and hook up with David Perry for a float trip on the beautiful Elk River,” Angela remarked. “Rain or shine, it’s beauty all around and a day filled with magical laughs and memories of catching incredible brown and rainbow trout. Bring the net!”

Just beyond the trees lining the banks, watercress farms dot the landscape. Farmers use river water to grow their crops. Several small waterfalls pouring from the fields plunge into the river, making excellent places to catch trout. The running water frequently carries bugs and other small creatures that trout eat.

The group fished nymphs under floating strike indicators. Trout face upstream waiting for currents to bring them food. Ideally, suspend a fly just off the bottom so it drifts at the same speed as the current. People can also use various other feathered temptations. When bugs hatch during warmer months, fish dry flies. Streamers, which imitate minnows, work best during colder months when insects become scarce and trout feed more heavily upon small fish.
Before fishing the river, check with Tim and Rhonda Page at Tim’s Flies and Lies Outfitters (931-759-5058) in Normandy to learn the best enticements to fish that day.

Although we drifted, people can wade at the landing near the dam and at Farris Creek. Whether wading or drifting, always check the dam generation schedule at www.tva.com/Environment/Lake-Levels/Tims-Ford.

“The best time to fish the Elk River is when water comes through the dam at about 240 cubic feet per second to 400 cfs,” David recommended.

To book a trip with Southeastern Fly, call 615-796-5143 or see southeasternfly.com. For Fayetteville and Lincoln County information, see https://fayettevillelincolncountychamber.com/information-request.

The ExploreTRV mapguide is an online guide to the lakes and rivers in the Tennessee Valley. Know what the locals know. Share your story.