In my previous article, I talked about the Ash Wednesday Storm in March of 1962. We were so blessed to still have a home, as so many others lost everything. While I can’t say that things went back to normal, slowly we got basic services back and were able to come back to our cottage and spend the night. Gradually, the area looked less and less like a war zone. I say that, advisedly, as there were actual National Guard troops that patrolled, looking for looters. As a child, I was amazed at the power that Mother Nature had exhibited. Eventually, the neighbors that could, were able to repair their homes and there more lights on our lane. I was comforted by the return of streetlights and lights in windows.
At some point, we got a visit from a realtor, named Mrs. Janey. She was a very pleasant woman and she wanted to check on us. She had been the realtor for the purchase of our little asbestos cottage with the pink tile. She said that she knew of a property with multiple lots and a house on the Bay. She said that the owners were anxious to sell, and she thought of us. This intrigued my Father, as he wanted a better view, and this could be the new home of our practically professional seafood harvesting operation. We had the aluminum boat, a garvey, multiple fishing poles and three inner tubes with bushel baskets in our inventory. What a great opportunity to have our own beach. Mrs. Janey said that she could arrange a private showing.

One Saturday, we piled into our car and headed for this coastal Shangri-La. I would point out that my Father offered to drive, as he was concerned about Mrs. Janey’s ability to drive. I had noticed that she wore very thick glasses that made her eyes look more like a Blue Fin Tuna, than a human. The first warning shot was when she said that we needed to look past the disrepair and concentrate on the view. She pointed out that the home had survived the Ash Wednesday Storm, without any major damage. So, we made a right turn onto a sand driveway. This was the second warning shot, as some of the water filled holes were deep enough to swallow a VW. Down the lane we traveled, swerving to avoid the sink holes and there it was – The Red Ruin. Red paint was peeling off and there were multiple holes, where the local birds had created an aviary condo complex. Fortunately, Pop took some deep breaths and chose not to go to prison for strangling Mrs. Janey. Mrs. Janey, in true realtor form, kept repeating that this was such an opportunity. Mom, sensing Pop’s anger, said that we should just look, out of respect to Mrs. Janey’s 80 or 90 years of real estate experience. Pop, weighing continued marital bliss and the prospect of having to cook for himself, opened the door.

Off we marched to look at the Bay, while our tour guide prayed that we didn’t look at the looming structure. She took us down to the beach to soften the impact of the nightmare that was the house. Pop almost immediately saw the potential of launching our fleet from our own beach. Garveys, aluminum boats, and the newest member of our fleet, the Snark. The Snark was a Styrofoam sailboat, about 10 feet long, and offered the opportunity to learn to sail for us “stink pot” mariners. It had a sail, centerboard and a rudder and that was about it. It was a fun little craft, that looked more like a white bathtub, rather than an actual sailboat. Pop explained the principles of wind and sail and then proceeded to demonstrate. Unfortunately, this required him to recline in the bottom of the boat and handle both sail and rudder above him. I watched and learned as he sailed off into the Bay. It was like a stealthy, ghost ship, as you could barely see Pop lying in the bottom of the boat. He managed to bring the boat back to shore, without incident and with a great smile. I digress.

Having used all the words that she had to describe the merits of Bayfront living, Mrs. Janey now led us back to the Bates Hotel. On the back deck were the owners of the property. An elderly couple, who were able to find two spots on the deck, that would not collapse under the weight of twenty pounds. The husband said, “I wonder what the poor people are doing, today?” Now I was about 13 at this point and I can remember thinking that this was a strange comment, based upon the wreck of a house this was. Into the house, we marched. It was a dark cathedral with a great view. The centerpiece of the room was a grand piano. However, it had been used as a storage top for the wife’s paints and the husband’s books. I doubt it had been played in years. Walking around the inside was a chore, as there was stuff, everywhere. The final straw was the garbage that had been stacked in the kitchen. The smell was overwhelming. Out of the house, we marched. 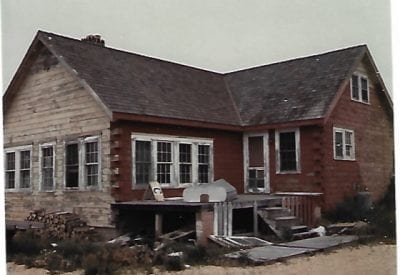 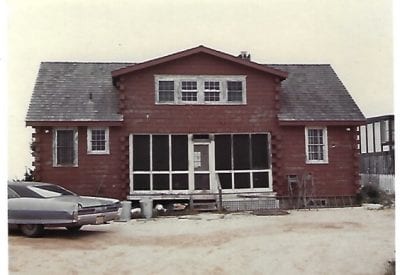 Pop was quiet on the trip back. I wasn’t sure if he was contemplating where he was going to hide Mrs. Janey’s body, or he was mesmerized by the waterfront. Turns out, it was the latter and he would not face jail time, just the headache of the money pit. Soon, the fleet was transferred to our new “home” and we began the process of reclaiming the house from the racoons and birds. The back porch was used to store the aluminum boat, as this was the only use that would not cause bodily injury. We settled in for a long winter of DIY adventures. I have included a photo of the front of the Red Ruin and the back, showing the aluminum boat resting on the back porch. It was, in fact, the only thing that could rest on the back porch.

So many memories, so little time.