This is the season that all spouses of boaters hate. It is the BOAT SHOW season. This is no longer a male time, but rather a time that all genders come to see what the newest technology looks like. Saltwater, freshwater, lakes, bays and rivers all have their preferred vessels. Show participants wander around the display floors, awash in the aroma of fresh fiberglass and vinyl. The boats are in an array of configurations: Deep – Vs, Catamarans, Skiffs, outboards, inboards, and inboard/outboards. Each has a new, shiny exterior and various amenities in the cockpit and below.

One year our family was not spared the boat show bug. We had so many adventures in our aluminum rowboat and our garvey. Both craft had exhibited good fishing characteristics, in their own way, but my Pop wanted to check out what else was out there. He mentioned to Mom that it would be fun for him and his only son and part time rowboat captain to go to the show. He said he wasn’t intending on buying anything, but it was the time of year when discounts were numerous and deep. He told Mom that he wouldn’t think of making a boat purchase, without consulting her first. I noticed that when he made a statement, like this, he had a certain look/grin. Mom had her own look, that indicated her desire to put on boots. I learned from Pop and tried to adopt his verbal procedure for future purchases. My wife, unfortunately, also noted Pop’s technique and when I offer a similar innocent offering, she simply says no. However, I view this simply as an opportunity to deepen our relationship.

Off we go to my first boat show! In those days the admission was only $2 for adults and free for sailors my age. We passed through the gate and we saw a huge arena, filled with boats, tackle, rain gear and the up to date technology. The best technology at the time were things like lighted compasses, radios and gauges. Glass cockpits and GPS were not even on the radar. In fact, I don’t remember seeing recreational radar, though I image it was there, somewhere. So, up and down the isles we marched, occasionally stopping to climb into a boat and chat with the friendly salesmen. Towards the end of our hike, Pop saw a Larsen 18’ Inboard/Outboard at the end of the aisle. It was as if the boat had some special aura. He said that was a “yar” looking craft. Larsen boats were manufactured in Michigan and were mainly used in lakes.  As the salesman went through all the features, my Pop was looking very serious, as if trying to visualize our boating future. I sat looking at this really cool and comfortable vessel, that was almost too pretty to get fish slime and squid juice smeared on. Soon, we climbed down out of the boat, after assuring the salesman that we were really interested. I know that I was. While I enjoyed fishing in our current fleet, this was a comfortable, fast fishing machine.

As we rode home, I asked Pop if he thought we would be getting a new boat to add to our fleet. He said that it was very important to get Mom’s approval. I understood this sentiment, as I remembered Mom “forgetting” to pack Pop’s lunch on one of our fishing excursions. This was because he couldn’t refrain from taking Mom’s picture, while she was bent over the gunnel, crabbing. When we got home, Mom asked him if we had a new boat. Pop said, “absolutely not”, although he said that he did see one that was very reasonable priced, that was heavily discounted for the show. He emphasized the fact that the plush, genuine, vinyl seats folded down. This would allow Mom to work on her tan, while her men continued to fish. It was a well-built vessel with a strong warranty. Life preservers, a fire extinguisher and even lines were included. Then came the twinkle in his eye and the look of a 10-year-old on Christmas Eve, waiting for Christmas Morning. Mom asked to look at the brochure and Pop gave me a little wink. I knew at that moment; we were going to have a new boat and my already large respect for my Father was increased even more. So many memories, so little time… 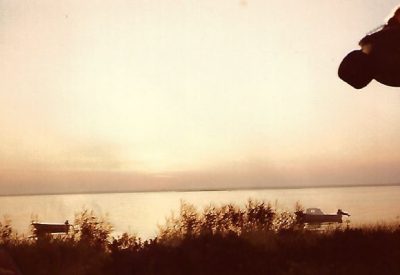