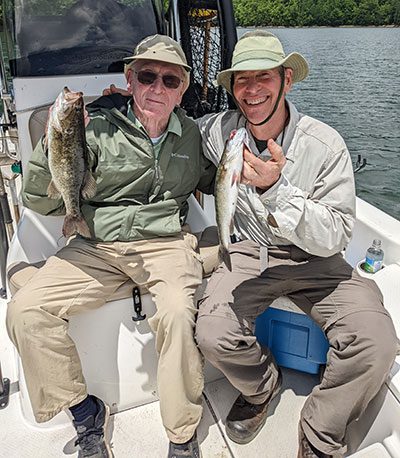 Woke up the other morning and, after heading outside on the porch, almost went back in for a jacket. Love the heat-breaking turn of time that gets us to fall. Fish love it too. Cooler weather triggers that urge to put on the feed bag and get ready for winter, still months away, but somehow they know it’s coming. At the house, I feed a lot of corn to turkeys. Usually don’t start ‘til a little later in the fall but turkeys and fish have similar habits. As the weather cools, birds and fish bunch up; guess the safety in numbers urge kicks in but you start seeing larger and larger schools and flocks.

With turkeys, I think a summer season of herding a personal flock of polts gives way as they mature to adults wanting to see their old friends now that the kids are about grown. With fish, it’s a little different, but the gathering of adults is the same. Summer has lots of small hatches of immature bait fish scattered across open water. Early, on an August morning, you see scattered breaks with a couple of fish chasing several shad or herring. As fall approaches and baitfish mature, they also answer the call to join up in greater numbers for safety. This triggers adults of gamefish to do likewise. It’s nothing on some lakes that are lucky enough to have stripers, to see hundreds or even thousands of fish breaking at once. This concentration of gamefish happens with bass and stripers, most notably.

While early mornings stand the best chance of hosting top water theatrics, the schools stay grouped all day. After the sun is up, check out points in particular but many times, I have found them suspended in mid channel. Early morning baits typically are spooks, jerk baits and chuggers. Later in the day, we switch to flukes and spoons as fish are typically 25 to 40 feet deep. On Fontana, we do a lot of trolling for spots and my map has lots of figure 8 trails off of points. As the day wanes, your electronics will lead you to the most productive areas. I am going to check out a process of searching for open water stripers while running 20+mph, and will let you know how that works in future articles.

Get out now, less folks running around in wake boats and jet skis, way more comfortable temperatures, larger and larger schools of hungry fish, it’s a beautiful time of the year. Thank God for our many blessings of places to fish and the ability to chase them. Later, Capt. James