The soft hum of a Coleman lantern blended with the night noises on the lake. Bats occasionally swept through the edge of our lantern light, bluegill sipped mayflies on the surface, and a lone owl reminded us he was nearby. The crappie fishing had slowed as the night went on and our conversation had fallen into silence until Beanpole spoke from the back of the boat.

“Jim, do you think there are aliens out there?”

Sometimes with Beanpole’s questions I had to figure out what prompted them. On this one, I had no clue.

I reeled in and checked my minnow. He was almost as lethargic as I was, but I lowered him back anyway. I decided it might liven the evening up some if I played along with Beanpole.

“Sure, it makes sense. Why would we be the only living creatures in the universe?”

Beanpole pondered that one a bit. “Do you think they ever come here?”

“You mean the lake?”

“Could be. They probably get as curious about us as we would about them.”

“What do you think they do when they come?” asked Beanpole.

My last answer ratcheted the conversation up a level. Beanpole began to fidget in the back of the boat. I could hear him starting to shuffle his feet on the carpet.

“Eat? Why would they want to eat us?”

“I don’t know. I’ve heard they sometimes get parts of cows. Maybe they want to try something different”

I could almost hear the wheels turning as Beanpole thought about all the alien stories he had heard over the years. Aliens cut designs in corn fields. Cows found without organs. Man abducted and returned after experiments.

Beanpole poured a cup of coffee and took a slow sip. Then, he reeled in and replaced his minnow. He adjusted his cap and zipped his jacket up just a notch. Anything he could think to do besides think about aliens.

“Do they ever see them around here?” asked Beanpole.

“Sure. I heard of one UFO over on Highway 57 that just sat and hovered for a couple minutes stopping traffic. Over near the Air Force base they say they’ve seen mysterious lights outrun our jets and then stop on a dime in mid-air.”

I pulled our lantern in, pumped it a few times and then swung it back over the lake. The sky was crystal clear and the stars looked as if you could touch them. I noticed Beanpole following my gaze into space.

At that moment, a light streaked across the sky, growing in intensity as it traveled. Clearly, this was no jet or commercial plane. The object appeared to have a flame behind it almost as if powered. The lower it fell, the brighter it got. After it passed overhead, the object continued to glow as it fell and appeared to land just over the ridge.

Beanpole could hardly contain himself or the boat him. Standing, rocking the boat, then sitting to keep from falling out, he finally stammered, “What was that?”

I didn’t know either, but the timing was perfect.

“Looked like a UFO,” I said. For all I knew, it could have been a plane going down or swamp gas, but I wasn’t going to waste the moment.

“Do you think they’ll come over here?” asked Beanpole.

“Maybe,” I said. “If you can fly across space you can probably fly over that ridge.”

“I think we should go now,” said Beanpole. He kept looking around the boat as if aliens could be sneaking up.

“Oh, the fish will probably start biting again in a minute,” I said. “All that energy from the aliens likely gets them stirred up.”

“Well, it sure gets me stirred up,” said Beanpole. Without any more discussion, he pulled in his lines and cranked up the anchor. I could see we were leaving, which was fine with me as we had plenty of fish to clean.

The next morning, I slept in and went for a late breakfast at my cousin’s diner. On the way in, I picked up a morning paper and read the headline on the front page, “Giant Meteor Lights Up Ten States.”

I was reading it when Ronnie came over and filled my coffee cup.

“Weren’t you guys on the lake last night,” asked Ronnie.

“Yep. Saw this meteor, too. Lit up the sky. Beanpole was going on about aliens, so I had him convinced it was a spaceship that landed. He made me reel in and go home.”

We had a good laugh and were still chuckling when Beanpole came in. He was considerably more relaxed than when I left him last night.

“Not at first. I kept thinking about aliens.”

I reached out and turned the newspaper over to hide the headlines. I guessed right that Beanpole hadn’t heard about the meteor.

“Anybody missing?” he asked.

“Not anybody I’ve heard about.”

“That’s good,” said Beanpole. “Maybe they were just looking around.”

I let Beanpole go on thinking about aliens. Ronnie came over to get Beanpole’s order and I could tell by his smirk he had something in mind.

“Unidentified frying objects,” said Ronnie. Beanpole took a look at both of us and we all began to laugh.

“Fishing When Aliens Attack” is an excerpt from Jim’s latest book, Fishing With Beanpole. You can find his book on Amazon or order autographed copies from www.acreektricklesthroughit.com. 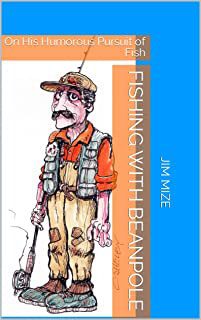 Fishing with Beanpole On His Humorous Pursuit of Fish

Fishing With Beanpole is the second in the series of misadventures with Beanpole. If you have already read Hunting With Beanpole, then you and Beanpole have met. If not, I’ll introduce you to him. Beanpole is a curious fellow in all meanings of the word; he’s different, inquisitive, and gullible. These characteristics breathe life into a story when you add ingredients such as bad weather, tall tales, and natural phenomenon. By the end of this book, you will realize that your fishing buddies all have a little bit of Beanpole in them, or if not, you will wish they did. The world is a richer place once you have met Beanpole.

Jim Mize has received over eighty Excellence-In-Craft Awards, including awards for each of his first three books: The Winter of Our Discount Tent, A Creek Trickles Through It, and Hunting With Beanpole. Also, Hunting With Beanpole was selected for the Pinnacle Award from the Professional Outdoor Media Association (POMA), the organization’s highest honor for books.