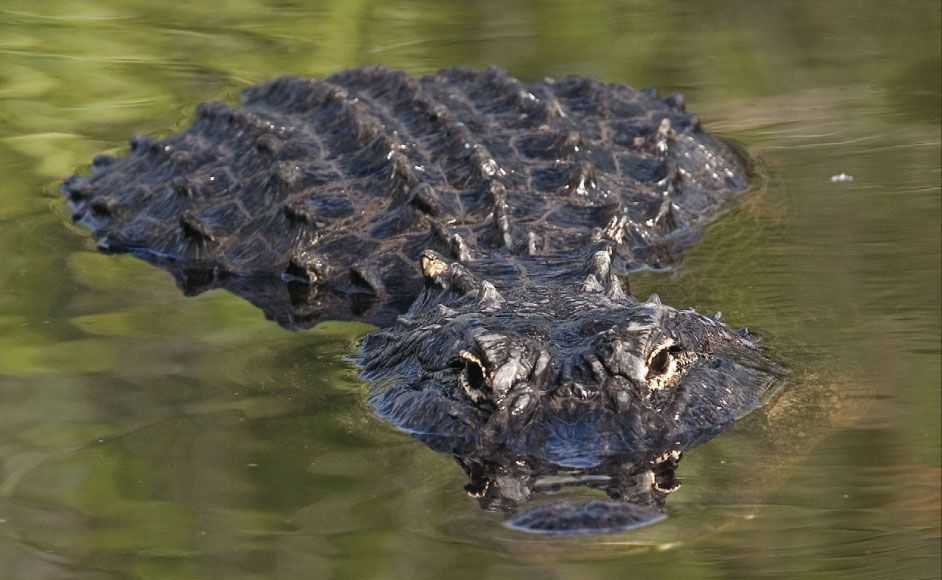 The harvesting of alligators in Florida is an important component of alligator management in Florida and is regulated by the Florida Fish and Wildlife Conservations Commission (FWC).

The American alligator is a reptile scientifically classified in the Family Alligatoridae. It is similar in appearance to the threatened American crocodile which is classified in the Family Crocodylidae. Habitat preferences and several physical characteristics distinguish the American alligator from the American crocodile. Alligators primarily inhabit freshwater; however, they may be found in any body of water or wetland throughout Florida. American crocodiles primarily inhabit coastal swamps and rivers in extreme southern Florida. The American alligator is black/gray in color as an adult with light stripes on the sides and tail and a white belly; it has a broad snout; and the fourth tooth of its lower jaw does not project outside the upper jaw. Whereas, the American crocodile is brown/tan in color with dark splotches on the sides and tail; it has a narrow snout; and the fourth tooth of its lower jaw projects outside the upper jaw. The American alligator’s range extends from the south tip of Texas to the northeastern edge of North Carolina. Florida’s wetlands support only two of twenty-three different species of crocodilians in the world. In Florida, crocodiles are protected as a federally endangered species.

Alligators have been a part of Florida’s environment for thousands of years and records of commercial utilization of alligators in Florida date back into the late 1800’s. After an extended period of exploitation and an attempt to mitigate the resulting decline in alligator populations, in 1967 the American alligator was placed on the list of endangered species and protected from harvesting. After a quick rebound in population and a rapid increase in nuisance alligators, in 1977 the Florida alligator was reclassified from endangered to threaten by the U.S. Fish and Wildlife Service. This change in status allowed the FWC to initiate management of the nuisance alligator problem through harvesting which continues today. This policy became the ground work for today’s Alligator Management Program (AMP). The major objectives of the AMP are to implement alligator harvest programs under the concept of controlled annual harvests while sustaining the economic, aesthetic, and ecological values of alligators as a renewable natural resource.

Under AMP the harvesting of alligators is strictly regulated and the penalty is stiff for even first time offenders. It’s imperative that anyone permitted to harvest alligators be aware of, and abide by the regulations. FWC holds training seminars prior to the season to help informed the public on the requirements within the harvesting program.

If you are one of the fortunate few that received a harvest permit and are not familiar with the hunt, you can hire a guide or outfitter as long as they are a licensed alligator trapper or agent. Beware that on some waters, outfitters and guides are required to carry a captains’ license issued by the U.S. Coast Guard, so check your harvest area requirements before hiring any outfitter or guide.

In addition to the state program, some Florida counties issue a ‘county- wide’ alligator harvest permit. These permits have specific restrictions as to where you can access and harvest alligators, so be mindful of where you can hunt before obtaining one of these permits.

Alligators may be taken only by the use of artificial lures, or baited wooden pegs less than two inches in length attached to a hand-held restraining line and hand-held snares, harpoons, gigs, snatch hooks, and manually operated spears, spear guns, crossbows and bows with projectiles attached to a restraining line. The use of baited hooks, gig-equipped bang sticks, or firearms for taking alligators is prohibited except that bang sticks are permitted for taking alligators attached to a restraining line. If you think you can harvest an alligator like they do in the TV Reality Series Swamp People, then think again. Captured alligators should be killed immediately and their meat cooled as quickly as possible.

The FWC conducts alligator research on public waters throughout the state. If you happen to harvest a tagged or marked alligator, report your tag to 352-357-0190 to ensure the viability of the population.

Though you may skin and consume your own alligator, if the skin, carcass, or meat is to be sold; only permitted alligator processing facilities must be used to process the animal. If you wish to keep skeletal remains such as the head or feet, a written transfer of ownership should be obtained from the permit holder or the processor.

Alligators by the numbers

The Florida record for weight is a 1,043 pound (13 feet 10.5inch long) alligator taken from Orange Lake in Alachua County.

The experience of harvesting an alligator can provide a lifetime of memories and campfire stories. However it is extremely physical and quite dangerous and should never be taken lightly. More so, when harvesting alligators, NEVER assume an alligator is dead and does not need to be secured properly. They are quick and it only takes a second to lose a finger, a hand, or worse. If you are new to the sport, then do your research, plan your hunt a year in advance, hire a qualified guide or outfitter, and hope the permit lottery falls in your favor. Most of all, stay safe.