It’s all about the experience of fly fishing!

Most new fly fishermen enjoy the process of fly fishing as much or more than catching fish. That’s one of the great things about the sport; even if the fish aren’t biting, you can have fun practicing your fly casting technique. As a client once said, “with fly fishing, the fish are the gravy!” 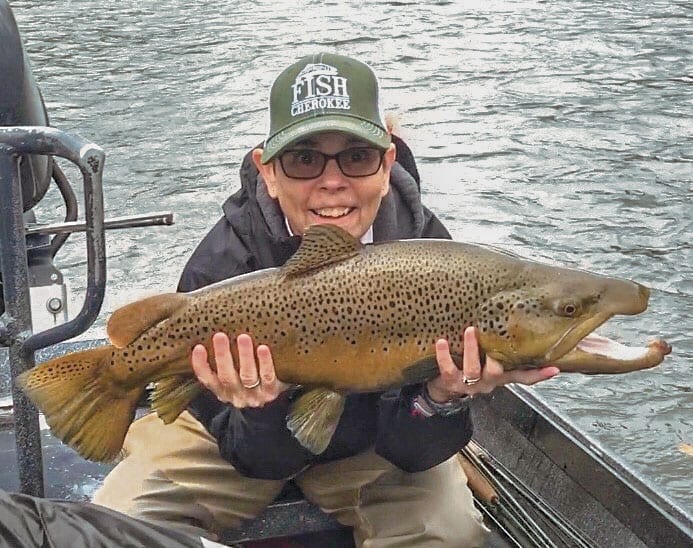 This early phase only lasts while fly anglers become more proficient with their casting stroke. It usually ends when the angler is done catching numbers of fish and wants to go for quality fish. Typically, the “pounds of meat” theory comes into play with big predatory fish like brown trout, which prefer “bigger bait for bigger fish.”

Let’s back up to the early stages of learning to fly cast with small and light flies that are easier to cast. Dry flies, nymphs or streamers in small sizes travel easily through the air because of less air drag and less gravitational pull. This allows for more consistency with the distance and accuracy of the cast.

Bigger flies have a large profile, which appeals to the bigger appetite of bigger fish with bigger stomachs. Also, bigger flies are generally heavier. They have a much faster sink rate that exposes them to more trout that inhabit the floor of the trout stream or river. The trade-off with heavier, bulky flies is that they are cumbersome and require a different fly casting technique than smaller, streamlined flies.

There is a fly casting technique called a false cast. This is a helpful technique where the angler uses a classic casting stroke with a “10 o’clock to 2 o’clock” range of motion to create a straight path for the line and fly to travel accurately. This casting stroke is repeated mid-air without landing the cast until the caster feeds the appropriate length of line and aims at the desired target area.

False casting is effective with smaller, lighter flies but NOT with bigger, heavier flies. If you attempt your classic “10 to 2” range of motion in your casting stroke, heavier flies will likely hit your rod, or worse, hit your a fishing buddy.

Because we are creatures of habit and our learned muscle memory is with lighter flies, it requires some retooling of the casting stroke to throw the heavy stuff. This new casting stroke is the “windshield wiper cast.” It has a broader range of motion like “9 o’clock to 3, or even 4 o’clock.” It requires the caster to break their wrist.

It sounds ridiculous, but try it if you plan to “chuck and duck” large nymphs and streamers for bigger fish. It’ll put your big streamer where it needs to be more efficiently, and it’ll also save you from chipping fiberglass off your rod or thumping your buddy in the back of the head.

Chris Scalley owns River Through Atlanta Guide Service. Contact them at 770-650-8630 or through their website at RiverThroughAtlanta.com.