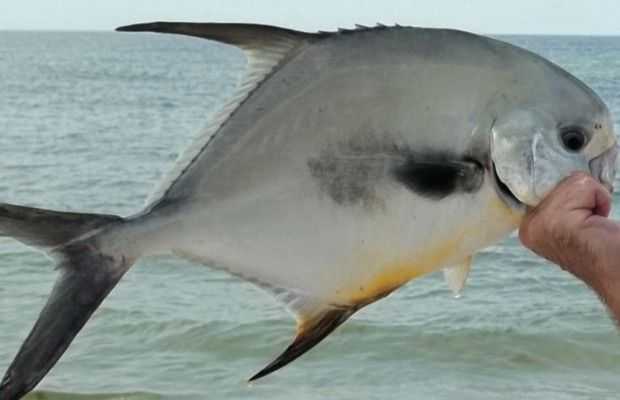 Ah welcome to April in Florida. Warm waters means fish, lots of fish. Cobia, Snook, Redfish, Tarpon, Trout, Spanish mackerel, Spadefish, and Pompano are all here and they are biting. The best part of April is the water is warm, not hot, just perfect for fishing. The Gulf has King mackerel, Cobia, Sharks, Grouper, and big Snapper including Yellowtail, Mangrove and Lanes. This has been our best year ever for huge Snappers. Amber Jacks, Blackfin Tuna, even some Bonita are all getting into the action in the Gulf off of southwest Florida.

The Snook are starting to move out towards the beaches, in preparation for the spawning season which means they will be keying in on bait fish. It seems Snook need the oil from the bait fish to spawn. Now that is a guess but each year as the water warms up, Snook will eat Shrimp and other types of bait but then shift their focus to white bait thread fins. These oily little fish are crack for Snook now. Funny they were all about Shrimp a month ago. The Snook will follow the shorelines on the way to the Gulf, so the west wall and down the keys on the east side is where to start hunting for them. One of my favorite spots for Snook is Cape Haze. On Cape Haze the Snook divide between the larger Snook outside the bar and the smaller Snook inside the bar. The smaller “Buck” Snook will be right next to the sand on the beach under a mangrove trees hiding between the branches, whereas the larger 30 inches and up will be just on the outside of the sand bars. This might be because the larger Snook are the predator and the smaller ones are still the prey. The big ones like the access to the deep water on the outside of the bar. In fact many of the largest Snook after the spawn will become reef fish. By that I mean instead of coming back into the Harbor they will head off into the Gulf to the near shore reefs. Down by Marco Island or Naples the Snook are commonly caught on near shore reefs in the Gulf. Did you know that the west coast of Florida catches and releases over a million Snook each year? That’s a lot of Snook!

So now that you know Snook are keyed in on bait fish, if you are a lure person pick lures which look and sound as much like a Greenback or Threadfin as possible. I was just thinking I forgot one fish which is another important food source. Mullet, yes the Mullet, is an oily baitfish and Snook find them hard to resist, so a lure which looks and sounds like a mullet is also very effective during the month of April.

It is hard to imagine that only a couple of weeks ago the Harbor was in the 60’s temperature wise and now it’s in the 70’s. This is a major difference in topical waters where prime fishing is when the water is between 70° and 80°. The range could be said to be 65° to 85° but under 65° many tropical fish, which is what our fish are, get lethargic and slow down. Above 85° the water holds less oxygen so again the fish slow down too conserve oxygen. As the water gets warmer you should be using shrimp for bait. Once the water gets over 85°, switch to cut bait or even dead Shrimp for fish will chase their food less when oxygen levels are down.

April is the time where you can catch fish from any type of boat. Mackerel and Pompano, Sharks, Cobia, and Tarpon are all in the open waters of the Harbor while Snook and Redfish are back on the flats. So whether your boat is deep draft or shallow draft there is a fish for you. Hopefully a bunch of fish.

My goal for April is to catch some Pompano. I will be looking right off the sandbar starting at Alligator Creek then down to Burnt Store and troll my way down to Two Pines. I will use a #9 Rapala X-Rap OG color on one side and a Banana Jig with a teaser on the other side. On the ready rods waiting for me to find the Pompano, I’ll have jigs rigged up and some prepared pieces of Shrimp’s tail at the ready to place on the hook. Jigs tipped with Shrimp are like candy to a Pompano. I don’t use Shrimp pieces while trolling for they make my jig spin while dragging it through the water. Once I hook a Pompano trolling, I stop and start casting the jigs tipped with shrimp to fill the cooler.

My other thing to do is check for Tripletail along the coast and at the marker in the harbor. If I can find any, ‘OK’ really cool, if not and if it’s a nice day, I’m heading out to the near shore reefs in my flats boat to get in on the Snapper bite. I will be targeting Lane Snapper or maybe a Yellowtail, either would be ok, oh heck I don’t care, I just could use a fresh Snapper dinner. It’s been a while and I am Jonesing.

The wife on the other hand has Snook in mind, so I know I will be casting the Islands on the east side of the Harbor. Terry prefers live bait, but I will be using the Storm Twitch casting side arm up into the Mangroves trying to get as far under the branches as possible. After the lure lands I’ll wait about 3 seconds then just shake the tip of my rod. When the lure made the first splash, Mr. Snook probably disregarded it as falling debris, but when I make the lure twitch a bit it comes to life as a wounded or stunned food source and Mr. Snook will think it’s an easy meal. And then HA, HA, HA, I’ll say with an evil laugh, you are mine Mr. Snook, mine I say, mine.

Wait, I might be getting a little too excited about that Pompano or Snook dinner. Sorry, I’m just looking forward to April and some time on the water and the sound of water lapping against the hull of my boat, fish splashing, sun glistening off the water, and maybe just maybe if the Gods smile on me, a fish dinner.

What a great time to be here in Southwest Florida. See ya on the water!