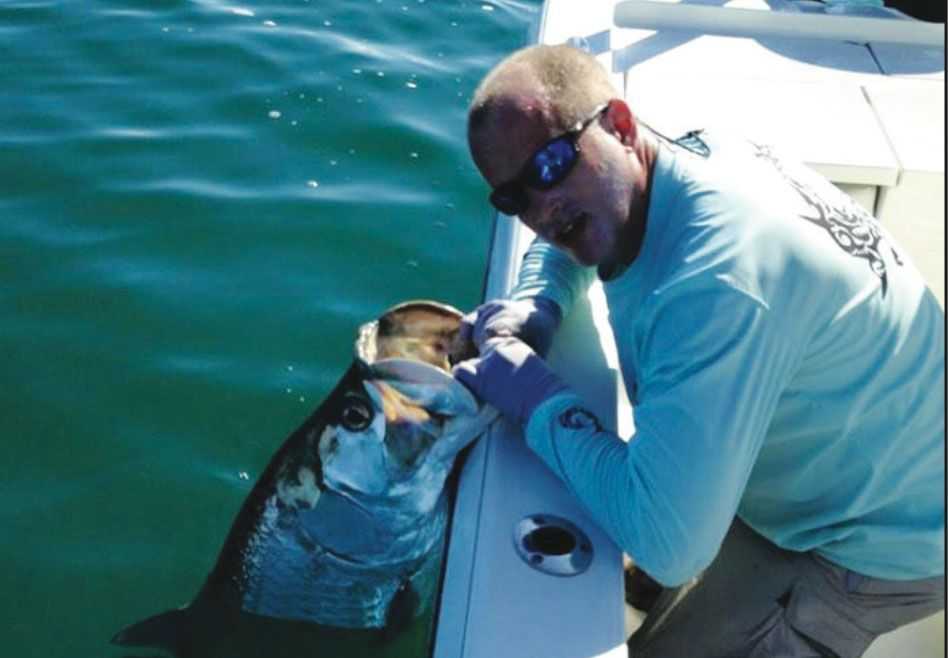 Ahhh the warm breezes of July. Ok it was worth a shot, it’s hotter than heck out there and the fish feel it as well.

Once the water temperature starts to rise, you need to slow down your fishing.

Let’s start at the beginning. You need to be on the water at the crack of dawn, so prep your boat, tackle, and supplies the night before. In the morning get up early and sorry, no stops at the diner for breakfast. Day break is when the water and the fish are going to be at their coolest temperature of the day, and the fish will be most active. Once the water reaches about 85 degrees I start switching from live bait to cut bait. Cut bait really works well during the hot summer months. If you think about it, the water gets dark and murky with the rains washing all the sediment down into the Harbor, so it cuts the visibility way down and the fish have a hard time seeing their prey. Live bait really doesn’t have that much smell to it. Yes a shrimp smells like a shrimp, and white bait smells like a white bait. But if you’re reading this in a room with people in it, I hope for your sake that you cannot really smell the people in the room. Now think if one of those people passed away in the chair, they wouldn’t be moving around to grab your attention, but I’m pretty sure you would start to notice them when they started to smell. It’s the same way with bait. Live bait move around and has some odor, but the fish can’t see it very well, but toss a chunk of dead bait and let the smell party begin.

I think one of the coolest things about this time of year is how many different fish are here, and how many are monster sized fish. Tarpon are finishing their spawn but there are always a few late to the party and they are getting ready to move back into the Harbor and rivers. Tarpon are loaded in the passes and July is one of the best months of the year for big fish. Watch the storms at night, if you see a lighting storm over the Harbor, most often

the tarpon will head out to the gulf, we think it’s to avoid the lighting, and then in the morning they will cruise along the beach and come back into the Harbor. Once the tarpon are in the Harbor, it becomes a fish fight. The crabs have thinned out and tarpon start searching for thread fins, ladyfish, and any other bait fish and that’s when things really get fun. The D.O.A. Bait Buster once again rules the world of the tarpon bite. Cast it out and let it sink, then give it a big pull up with the rod and then a slow drop with the tip of the rod, take a couple turns on the reel then big pull up again and then slow drop the tip again, then repeat.

The other big fish here are sharks, from 18 inches to 18 feet, they are all here; Bulls, Lemons, Black Tips, Atlantic Sharp Nose, Bonnet “shovel nose”, and many others. Sharks feed deep during the day and then as dark approaches they will head up into the shallows to feed. As big and bad as sharks are, they are sort of timid and like the cover of darkness to get shallow. So if you are looking for that big shark, the over 8-footer, set up in about 6 feet of water off the flats. My choice would be in front of Bull Bay, be there by 6:pm and fish until around 10:pm. That is prime feeding time for the larger sharks. Hard to believe but it is over by 10:30pm. Ok there may be a couple that will bite after 10:30pm but the major feed is 6:pm to 10:pm. The good news is you get home in time for the news and a cocktail. When doing all night trips, I will shark fish until 10:pm then switch over to snook or tarpon. My favorite area is over by Placida just south of the trestle. Drop a big chunk of mullet or lady fish on the bottom and wait. If you have some chum, toss a little in to create a chum line to draw them in. The cool part is you can use your shark leaders, for the fish can’t see well at night and the steel makes almost no difference in the bite but a huge difference in the pursuing battle.
Have fun and be safe out there.