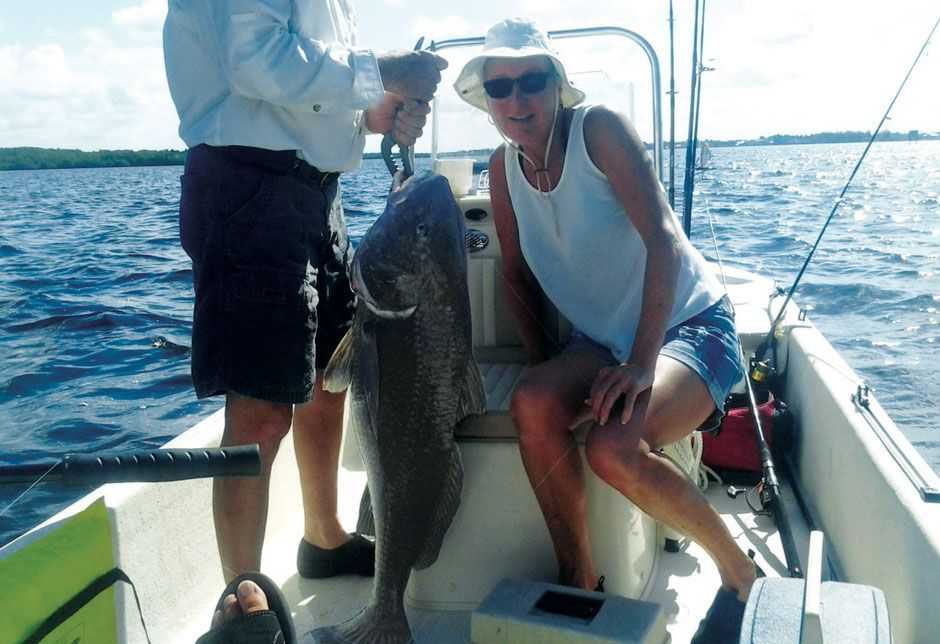 Every once in a while the stars, the moon, the water temperature, and the tides all come together to make fishing good, really good. That’s what’s we’re seeing right now in the Harbor. If Forest Gump and his friend Bubba were into sharks they’d have a field-day for there are; Black Tip sharks, Black Nose sharks, Atlantic Sharp Nose sharks, Bonnet sharks, Lemon sharks, and way too many others to name them all. When sharks are this plentiful, that’s a good indicator that food is plentiful which translates into good fishing for everybody.

Recently we have received reports of huge schools of black drum spawning in the Harbor, thousands of 40+ lb. fish boiling the water. Cobia are skimming the surface and cruising the shallow flats on the bars on both the east and west side of the Harbor. Tarpon have shown up and they mean business, cruising and eating like a bunch of kids on Spring Break. I love this time of year when you can be boating across the Harbor and have a 150-lb bright silver king jump completely out of the water and crash land back into the waves, leaving everyone speechless. Yes Charlotte Harbor can take your breath away when these monster fish are here. In May start watching for the giant Spotted Eagle rays to return. They’re a cross between a submarine and an alien space craft just gliding under the surface of the water until they explode into the air and return to the water only after completing a 180-degree back flip.

The flats here in the Harbor as well as Bull and Turtle bays are doing well on Redfish. But I would have to say the Snook fishing is by-far the better option for the flats are full of them. For now and over the next month, Snook are going to be heading out to the barrier islands for the annual pre-spawn rut. So a Storm Twitch or an old fashion MirrOLure 52 MR 18 cast close to the shore and slowly twitched back with a moderate retrieve will make your Snook dreams come true.

As for the beaches, both flounder and King Mackerel have been very active close to shore.
I know generally you don’t mention these two fish in the same sentence but that’s what we’re seeing. King mackerel have been caught, and I mean 20+lbers, right from the beach in Englewood and all the way down to Boca. Generally they have been a by-catch of those fishing for small sharks using a chunk of dead bait or a live thread fin. Still, no one is complaining.

So what’s making the Harbor come alive? Besides being that time of year and having a nice warming spell, the bait has returned to the Harbor, it’s teeming with Thread-fins and Green-backs. The Thread-fins you can see, they’re the ones which look like rain on the water while Green-backs, a.k.a. Pilchards, stay a little deeper in the water column. That is until some predator slashes through them to the point where the Green-backs take flight into the air in a massive bait shower. At the moment they’re thick around Devil Fish Key and Jug Creek Shoals. There have been some caught at Pirate Harbor and up by Markers #1 & #2 but more plentiful down harbor a ways. All you need to catch them is a good cast net or a set of Sabiki bait rigs and a good live well.