It’s springtime in Florida and a young man’s fancy turns to tarpon. Yes a young angler’s thoughts and dreams are focused on just one thing, that giant Silver King. Each year the tarpon return to Charlotte Harbor to spawn and while they are here to make bay tarpon, they will also school up with the young ones which have been living here waiting to get large enough to travel with the big boys across the Gulf and possibly across the oceans. The arrival of these Silver Kings is not by any particular time on the calendar but driven by water temperature. Thirty years ago we used to tell people that by the middle of May the tarpon would be here. Then it was the end of April and now by late March we often see tarpon returning to the Harbor. They must be some confused fish. Then this past winter with a strong El Nino and warm waters remaining into December there still were tarpon hanging out in the passes. As the cold fronts of January and February pushed through, quite a few left but a good number of tarpon didn’t go far for they winter right down in the Keys. So it’s not really far for them to swim. Let’s think about it; it’s about 110 miles from here to the Keys, so swimming at 5 mph would only be a 22 hour swim, something easy for a creature who swims at least 18 hours a day. So here one day and back to the Keys in a day or two is a real possibility. Knowing this makes it easier to understand the tarpon.

We all like to think of tarpon as this huge silver fish which jumps 6 feet of out the water and splashes down in a graceful wash of wave and water. We sometimes forget that they start out as very tiny creatures. Tarpon are thought to spawn far offshore, some say 100 miles offshore during the periods of the full and new moon. However during periods of high salinity such as dry winters or periods of drought, tarpon will enter the bays and estuaries to spawn. Under these conditions the high salinity plays a key roll for it helps support the egg in the water column and prevents it from sinking to the bottom where it will die.

A female tarpon releases her eggs in a method referred to as broadcast spawning and the male then swims within the egg broadcast to release his sperm to fertilize the eggs. Upon completion both males and females leave the fertilized eggs to hatch into a transparent eel- like larvae which spend thirty days or so in the open ocean. After about thirty days and growing to a length of 3-4 inches the larvae begin their migration towards shore and the estuarine environments like Charlotte Harbor. Upon entering the Harbor the larvae continue towards the backwater creeks and canals where they will begin their transformation into juvenile tarpon. During this transformation it’s not uncommon to catch baby tarpon that are less than 6-inches in length. As juveniles they will remain in the backwaters until they reach up to 24-inches and then as sub-adults move into deeper inshore waters and along the beaches. At seven to thirteen years of age they will now range in size from 30-49 inches and be mature enough to begin their breeding cycle. A tarpon can live as long as 50 years and a 100-lb tarpon is around 14 years old. Many of the fish we catch in Charlotte Harbor are more than 20 years old. 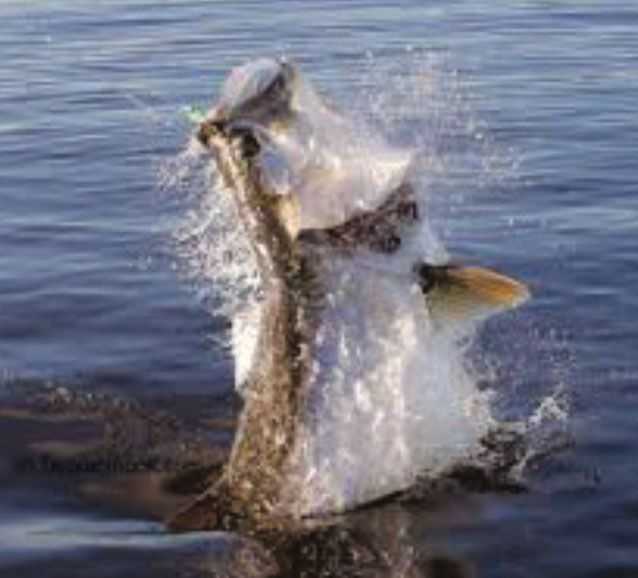 So how do you catch one? One of the best things about tarpon fishing is that they will eat just about anything. If they’re in the mood they’ll eat; live bait, dead bait, bait cut, whole dead or live bait, artificial lures that are casted or trolled, flies for both small and large tarpon, soft plastic lures, jerk baits, stick baits, and jigs. The point is they are not finicky eaters but their mood might be. Many times anglers will go out to Boca Pass and cast lures and jigs at rolling tarpon and come back disappointed and believe tarpon won’t take an artificial bait. So to put this delicately, remember when you were dating and you just met someone and things started to get romantic, were you really thinking about a steak and cheese sandwich? Boca Pass is the meet and greet singles bar for the big fish, you have tarpon heading into the Gulf to spawn, you have tarpon heading into the Harbor to feed, and I think they often get distracted by a cute(r) tarpon. Whatever the reason, they end up hanging out in the Pass. The key is, the ones at the surface are not the ones feeding. If they decide they need a quick snack they will dive to the bottom and grab a fish or crab and then go back up to join in on the fun. The only exception to this is during the Pass’s crab migration and then the tarpon are hitting at the top, the middle, and the bottom. These iridescent swimming crabs commonly known as the “Pass Crab” migrate out of the Harbor by the thousands as they try to reach the Gulf. Having only their tiny little flipper legs to swim by, they ride the outgoing tide to get out to sea. To make matters worse for these crabs, in May and June we have what is called Hill-tides, which get their name from the sudden spike (hill) seen on a tide graph. During this period the low tide is very low and the high tides are very high which produce some of the fastest tides we’ll see all year long. So during these extra strong tides these poor Pass Crabs are sucked out to sea only to be greeted by thousands of hungry tarpon waiting to fill their bellies.

For the anglers dipping for these crabs and using them for bait, it’s one of the best ways to hook up on a monster Silver King. The challenge is to figure out how to present the crab. However since this was a starter guide into the world of tarpon, I’ll get more into the techniques of catching tarpon over the next couple months. The important thing to remember is, the more you understand how a fish lives, the better chances you’ll have of catching that fish.