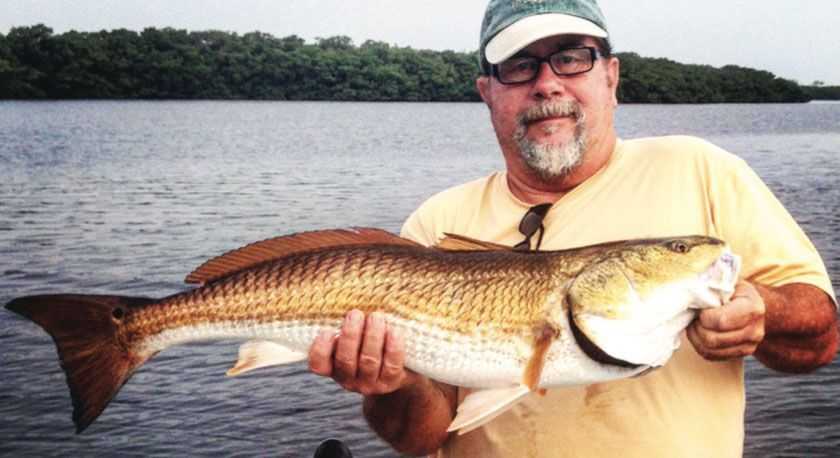 Good day my friends in the land of fish, a fine howdy do and now let’s get to the fish. At the beginning of this year people were saying there are no Redfish, aliens had abducted them and they were on their way to Alpha Centauri. I knew it was only a matter of time before the aliens figured out how good Redfish taste and would take them all. But I guess Redfish must upset their tummies because all of a sudden the Harbor was slap full of Reds. Here is the trick you’ll need to know, the dark water has caused the Redfish to do something a little strange this year.

Typically I’ll cast up under the mangroves for Redfish, but for some reason, and I think it’s the dark water, the Redfish are holding in better numbers away from the islands or mangroves. Don’t get me wrong there still are Redfish under the mangrove branches but far fewer then out in the open. Perhaps the dark water may have given them a sense of security, who knows why. Anyways a shrimp with a hook through the tail and a #2 split shot about 18 inches from the shrimp seems to be the ticket. I did catch a couple Reds under or close to the mangroves with a shrimp under a poppin cork but they were much smaller than the ones in the open. October was a great month for Reds and November is shaping up to be better. Funny how a couple of months of very sparse Reds started a panic at the beginning of the year, and now there are more Reds then I have seen in ten years.

Looking into my crystal ball for November, fishing it is going to be excellent. The weather has cooled nicely and the rain is slowing down. I do not believe the rain will stop this winter so it will be dark water fishing for a long while. The Pompano and Spanish Mackerel fishing has been very good. Bonnet Sharks and smaller Bull sharks are both in good numbers and very catch-able. For the Bonnet sharks look just outside or on top of the sand bars. The cooler weather of November really brings on the Bonnet Shark bite. Keep in mind Bonnets love shrimp, you’ll catch 6 to 1 on shrimp over fish as bait. However the Bull Sharks are different, they are yearlings which were born earlier this year and have yet to leave for the Keys. These Bulls run about 3 to 4 feet long and like to hang out on the flats, looking for a Ladyfish or Pinfish dinner. A chunk of fish under a float with a steel leader, which is something I do not use on the Bonnet Sharks but is required for the Bulls, will get their attention.

In November the average Gulf temperature is 70 degrees and that is prime King Mackerel fishing weather. The Kings seems to like 68 to 72 degree water and Cedar plugs are rocking the King bite. You could also try a Storm Twitch trolled opposite the Cedar plug. Why Kings would take a Bass lure I don’t know but last spring we were catching 20 pound Kings trolling the Storm lure. But hey, if they want a natural colored cedar plug with a nu-painted head, why not give it to them. Start looking for the Kings at 6 miles out and beyond.

Fish here in Florida are most active between 70 and 80 degrees, so get ready. The Sea Trout are thick along the sand bars and on the flats of Jug Creek and over to Turtle Bay, There are good numbers of flounder on the inside of Boca Pass just to the north of the Phosphate Dock. The flounder are also in good numbers on Cape Haze. Jigs are your best lure for flounder but a shrimp on a jig head is the best of both worlds, live bait and a lure.

So much fishing and the perfect weather to do it in, if you leave out the wind. The good thing is in Charlotte Harbor there is almost always a place to hide from the wind, and with a strong EL-Nino this is likely to be a breezy November.

I almost forgot, the Myakka Cut-off is holding a bunch of Redfish and the Sea trout are right at the mouth on the south end. The Sea Trout are suckers for a shrimp under a poppin cork here, or a tandem jig lure. There are bunches of them though not as many keepers as you will find south in the Harbor. But for the Redfish on the south end, I would go into the Cut-off and just past the first opening on the right the shore jogs in a bit, I would start right there looking for slot size Reds. Here you want to be casting about 10 feet off of the mangroves. Right at the shoreline the water isn’t very deep but it falls off into a trough about 10 feet from the shore and that is where the Reds like to lay and feed.

I hope to see you out on the water. My dad and I have been having a blast with the Reds, Snappers, Sharks, and Snook on the flats, so I hope you get a chance as well.