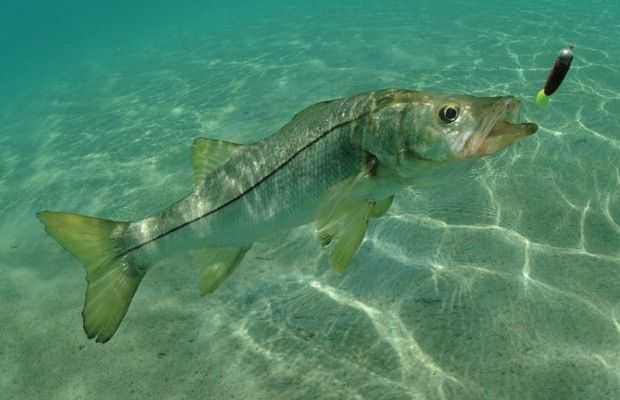 Hey boys & girls out there in the land of fish; the weather has not been great for going fishing but the fishing has gotten a lot better over the last couple of weeks when we can get out there. The heavy cloud cover and rain has dropped the water temperature as much as 20 degrees in Charlotte Harbor allowing for the oxygen levels to come up and the Redfish and Snook are loving it. Fishing on the east and west sides of the Harbor is good to better than good with the fish hanging out by the sand bars early in the day. Then as the sun rises higher, they head to their favorite shade tree. Kinda like me I guess. In southwest Florida there can be an easy 13 degree difference between water being in the direct sun and being in the shade. We often don’t think of it since we think of water as always being cooler than air temperature but it’s the same thing. Shady water is cooler. The mangrove islands on the east side have quite a bit of shade and since ‘green means go’, when it comes to fishing on the east side during the mid-day, find the tree branches with lots of green leaves creating the shade and that is where you will find your Redfish and Snook.

Shrimp is a good bait while the water is on the hot side or cold side for that matter. Both will slow down fish movements and that makes shrimp a good bet since shrimp is slower moving than your typical bait fish. Another bait which works great this time of year is cut bait. I had a customer who told me dead bait will not work in a canal. That statement kind of caught me off guard as dead bait works pretty much any time, or any place, but right now with the water temperature 80 degrees or more and all that fresh rainwater we have, cut bait or dead bait is a staple of serious anglers. Think of it this way, the muddy brown colored runoff water coming down river makes it very hard for fish to see, so the fish hunt for food by sound or scent. And most fish have a better nose for food than dogs. Yes a live shrimp smells like a shrimp but not nearly as much as a dead one does. So it’s easier for a fish to find dead bait in dark murky water than it is for that fish to find a live bait. This holds true around bridges as well. During the day most bridges have a lot traffic and noise on them than during the night so fish are responding to smell. At night it’s quiet and the fish can hear or should I say ‘feel’ vibrations in the water and respond better to movement and noise. So the rule is dead bait during the day and live kicking bait at night.

My job title covers many things and one of the cooler aspects of being Fishin Frank is that I have to find new lures to sell every year. I like the classics but new lures with different sounds or body shapes can be just as good or even better. Question; if the best lure in the world was made and no one bought it, would it still catch fish? I have to say NO. So the reality is a lure must catch fisherman before it can ever catch a fish. The hard part is actual finding ‘new’ lures and not just the same old thing in a different package which is so common. Soft plastic baits are the worst, if you look close past the colorful packaging, you’ll find most are the same baits in a different package, and I mean the same.

This year I went with Livingston, a hard body lure which emits a sound. Yes it’s a lure with a battery inside it that will produce a fish attracting tone when placed in the water. Using sound to attract fish is nothing new, professional shark tournament anglers use underwater speakers to broadcast the sounds of fish in distress to attract sharks, so I’m going to give Livingston lures a try.

Savage Lures has come out with a soft plastic fish lure 16 inches long and it looks very real when pulled through the water. I believe tarpon and Goliath Grouper are not going to be able to resist them. I think you won’t even have to reel them in. If you have a bit of current, the action is so good you should be able to just hold them in a current, like at the Phosphate docks or around the bridges, and let the lure do the work. Weighing in at about a pound they are heavy buggers to cast, but that is the price of a monster fish. We also bought them all the way down to a more standard 6 inch version, but that doesn’t seem as much fun as the massive lure and the massive hit.

Vudo has a new shrimp lure different than the ones we carry now and I have ordered those as well. The weight in the front of the lures has a lip so it can be just reeled-in or jigged. They have an action on their own which really helps when someone is just getting started casting lures.

SpoolTeK is another lure we are getting in. This particular lure has a leader inside the lure. It has a hard plastic head with a small spool in it which holds leader material and the hook, when a fish hits the lure the hook pulls out on the leader. The hard plastic head holds a soft plastic tail, a paddle tail to be correct which is the fish attractor part. It makes a good thumping noise as you reel it in. It’s a bit pricey but it does catch Snook.

We also have Baker Lures and more new stuff coming but too much for one story, so I won’t go on about it. I will close up and shut up, so you can get on with your day. The fishing is good, the sharks, Spanish, Pompano, Redfish, Snook, Sea Trout are all in good numbers, and even some Triple Tail are in the Harbor.

So if you can get out one day early in the a.m., this month will provide you with some great fishing opportunity.
Be safe have fun