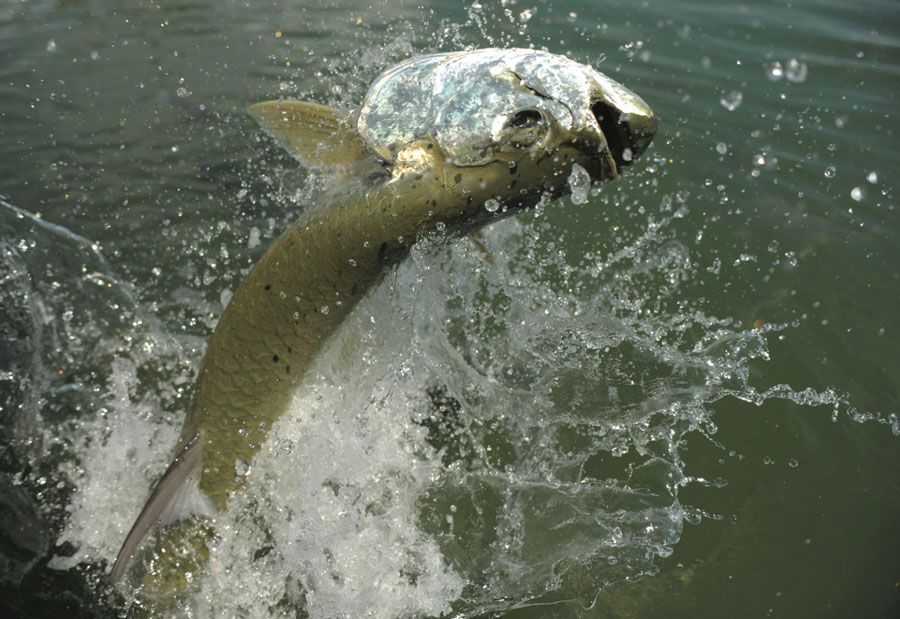 As I sit here at my computer writing about fishing, I can only think of how great it would be to be out on the Harbor or in the Gulf right now. With tremendous schools of Tarpon cruising the beaches in gin clear blue water, you can actually watch as the fish hits your bait or fly. That is just as WOW as you can get. The only drawback is, if you can see them, they can see you. A good tip to remember is to minimize your arm movement. Keeping your arms close to your side is key to not spooking fish. Think of it this way, when a bird is diving down, its wings are either tucked in or in a fixed position, and when a bird gets upset its wings flap way out from its body. So why would that scare a 100 pound tarpon? Main reason, that Tarpon was not always 100 pounds. At one time, it was very, very small and for the first years of its life, birds were a huge threat. So, anything with the look of out stretched wings will trigger a fight or flight reaction. By standing still, or at least keeping your movements small and close to your body, you have a much better chance of not spooking the fish.

With Tarpon on the beach, when you see Tarpon swimming along, gun your boat and get ahead of the school. Once far enough ahead, shut down the motor and try to become a hole in the water. Here come the Tarpon. If you’re smart, you’d already have your lines in the water in the path of the school, but don’t start your retrieve until you see the Tarpon. When using thread fins or crabs, I always try to get the bait out, under a float, before the Tarpon get to me. My choice of float is the clear casting bubble, the colored bobber or floats can spook a fish. The clear see-through bubbles are a better bet for beach crusing tarpon. I use 60 pound fluorocarbon leader, not the colored stuff. The only benefit of using clear fluorocarbon is that fluorocarbon will bend light the same as water, and if it has a color in it, is it still invisible?

When fishing with crabs, I use a 6/0 hook, either “J” or circle, it depends on your comfort zone. If you’re going to use a “J” style hook, remember to set it three times. The first set is as soon as you feel the bite, the second once the Tarpon starts to move, and then once more just to be sure. With a circle hook, gently reel to get pressure on the line. Since Tarpon have a boney mouth it’s hard to get a hook set. With circle hooks, the hook has to have time to roll in the mouth as the fish turns, then apply direct steady pressure and it will set itself. I’m not one to use anything smaller than a 6/0 circle, for there is not enough room between the point of the hook and the shank to warp around a large Tarpon’s jaw. With a “J” hook, I will go down to a 5/0 for crabs or thread fins. Now, if I’m going to use ladyfish or mullet for Tarpon bait, I move up to an 8/0 or 9/0 hook. You have to have enough hook left over after you go through the bait to get into the fish. With an undersized hook, you’ll end up pulling the bait right out of the fish’s mouth.

There are so many things to consider when you’re trying to catch a dream. The big thing about fishing for Tarpon is not to think of Tarpon as a majestic Sliver King, think of it as a big junk fish with no real value. You wouldn’t want to eat one because its meat is bloody red and nasty. It’s a living trash can that will eat anything from a catfish to a crab. The truth is, a Tarpon is only the Silver King when it is on your line and jumping through the air. Before that, it’s just a useless junk fish. Now, I say this because many people get all screwed up when it comes to Tarpon, they over think the fish and fret about having the perfect bait. The reality is they are eating machines and will pick up any tasty morsel they come across. So toss a chunk of dead bait, cast a thread fin, swim a mullet or ladyfish, or present a feathered bucktail jig, the thing to remember is that it is only a fish, that is until that moment your line tightens, your reel sings, and that Silver King makes its first acrobatic jump, at that point, the name Silver King falls short as to how cool this fish is.

I hope you catch your dream fish and have fun.