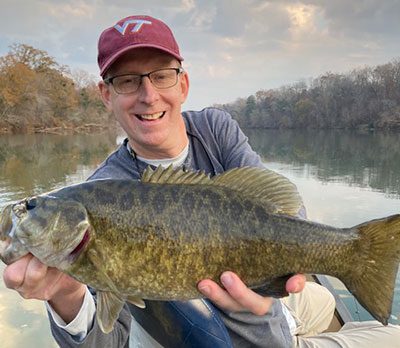 Here in South Carolina, September is the gateway to the fall. The magic day of September 22 is upon us. It’s day ONE of fall.

Serious smallmouth stalkers agree; fall is a great time for catching large smallmouth…One reason is that the end of summer – beginning of fall is almost always a low water period. Low water on rivers gives anglers a much better vision of where eddies, current breaks, rapids, and boulders are located. Low water also helps us identify streambed features, such as sand, gravel, shells, and depth contours.

Finding where fish are located means even more in the fall since these fish group up more tightly in cooling conditions. They are not as scattered. Fall is the time when we don’t just find a fish, we find a school of fish. And keep in mind that smallmouth generally school by size, so when you find a good bite, be patient and work your targets. Don’t be surprised if, thirty minutes later, you have a 15-pound bag of smallies!

The Broad River’s temps in the hot summer are typically 10-15 degrees cooler than surrounding lake water. At the outset of fall, water temperatures are approximately in the mid 70’s. With the appearance of cooler weather, the water temperature doesn’t immediately plummet, but it does begin to cool. A few days of cooling water and there’s a great chance of increased feeding by these river smallmouth.

When fall does arrive, the window here is quite wide. The water temp typically stays above 50 degrees well into December. I am reminded of a former client, Mark Bizacco. He hired me about three times a year, but always in October. He knew how tactics change in the fall and it fit his fishing style. On one of our best days we began fishing with air temperature in the mid 30’s. It took him about thirty minutes to catch a four-pounder on a buzz bait, and he caught four trophy fish that day. I also recall watching an instruction video with Stacy King crushing big bass in a Colorado highland reservoir on buzz baits with air temps in the low 30’s. The lesson is: don’t assume the fish are too cold just because YOU are.

Last, topwater works well in the fall, and I don’t meet ANY fishermen who don’t like topwater bites. The YoZuri Popper and the Berkley Bullet Pop are solid choices, as are the classic walking baits (such as the Lucky Craft Gunfish and the Heddon Spook). Also take a good supply of spinner baits. The Mepps gold, silver, and black blades consistenly work. Plus introduce the jerk bait, which is always a good choice in cooling water, given decent clarity.

I’m hoping a lot of you get out to fish more in the pleasantness of fall. It marks a stark contrast to summer heat and colors. Tight lines everyone!

Mike McSwain is from Charleston, SC but maintains residence in Columbia, SC on the Broad River. He guides for smallmouth bass on the Broad as water levels allow – usually from late spring through November