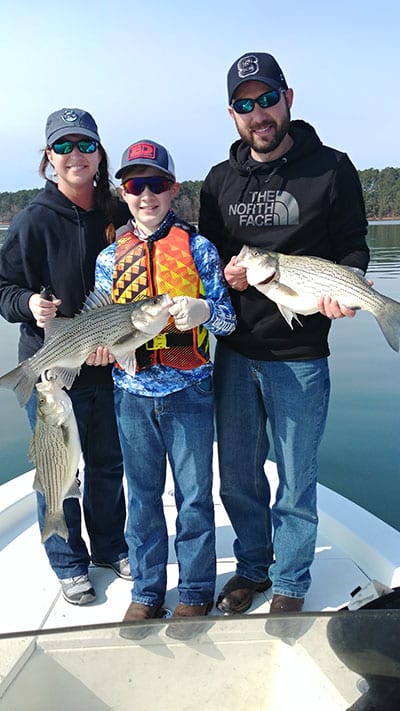 This month I was thinking about the guide business. I am in my 14th season and there have been many highs and luckily only a couple of lows. The greatest thing going is obviously all of the wonderful friends I have shared my passion with. Along with this, it becomes obvious that families that fish together, stay together. The pictures here are of a young man I have taken fishing, almost since I began guiding. This past spring we again caught some good stripers on Hartwell, the strange part is that since I took last year off for some surgery and COVID, it had been a couple of years since we last shared a boat. I could not believe how much he had grown in just a few months. A solid reminder that your kids grow up way too fast and you need to make room (insert time) for your sweetest possession.

My favorite type of trip includes one or two parents, a kid or two, and a grandparent or two. Generational sharing eliminates the need for generational healing if not enough interaction has occurred. On that subject, my least favorite type of trip includes the “boss”; you know him, he’s the one that’s paying and expects nothing less than the most incredible trip, huge size, crazy numbers, all having nothing to do with his skill level, which is typically low on the scale. Throw in enough beers and it can almost make you wish for a desk job. 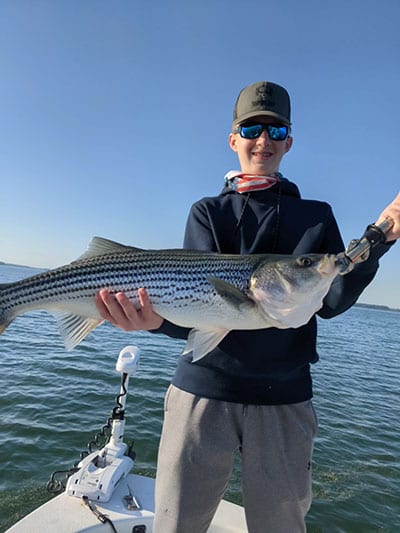 I remember one such trip where the boss didn’t want to go early, even though that’s when we were catching. When we finally started, I actually found a few hybrids and heard how small they were. After removing another fish from his rod and again hearing about the lack of “lunker” size for his catch, I began re-baiting with another blueback. Now, these fish were fairly deep since it was later in the day. When fishing deep and in windy conditions, I sometimes use 2 to 3 ounce egg sinkers. Upon hearing another jeer, I swung around quickly to at least let the boss know I was hearing what he was spewing. Not thinking, at least consciously, as he was getting another beer from his cooler, my egg sinker caught him right in the temple. At that moment he sat down, looked away and never uttered another peep. I am an old dog but I learned a new trick that day. I don’t usually resort to violence but just know it’s part of the arsenal in a guide’s bag of tricks. Luckily, I can count on less than one hand, those types of trips. Bring your kids or parents and let’s start making great memories. Later, Capt. James.