Good trash lines of floating structure that has acquired bait on it will almost have a marlin nearby this time of year. Tuna are a nearly daily occurrence with fish to 150 lbs taken recently.

Sails won’t be that prominent these months but there is always a chance to catch a few. Dorado will make their presence in bigger numbers in late October. There has been plenty of bait around and that usually rings the dinner bell.

Inshore, big roosters will still be hanging out at Matapalo and a live bonito just might hook you into one you can’t stop. Snapper will be hanging in deeper water as the inshore stuff might be clouded up by freshwater runoff. That doesn’t seem to bother the snook as long as bait is being flushed from the rivers along with silt. There is always a mixed bag of grouper, African pompano, jacks and such to keep anglers busy. A bonus is that the whales are in and are fun to watch with their calves. 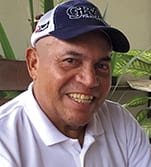 German Bustos has been head captain at Crocodile Bay Resort for the last dozen years after working on prestigious sportfishing boats all throughout Central America for nearly 20 years. He is one of the most requested captains at Crocodile Bay.