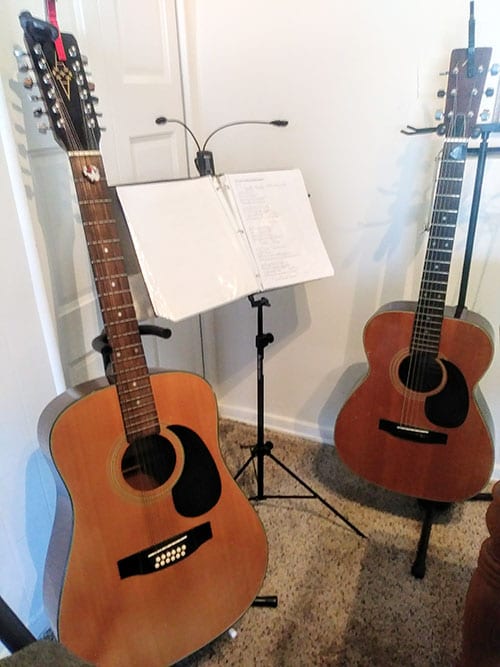 A few years back, right after my divorce was finalized – and I had also lost my broadcast business, I found myself on the edge of complete financial ruin. The only things that got me through that time were faith, the grace of family and friends, and selling off just about everything I owned. I dealt with the humiliation and sadness of it by trying to stay grateful that I had enough things I could sell to help me and my son not end up homeless. It was a very real threat at the time.

However, there was one item that was really hard to let go of. It was the Alvarez 12-String on the left side of this picture. It was the guitar I had played my boys to sleep with and I had spent so many hours finding peace and inspiration on. I had provided the background to countless campfires, fishing trips and front porch “together times”. A lot of songs were written on it. And, it was something that always seemed to be nearby through numerous life experiences, good and bad.

Not too long ago, my youngest son and I were shopping for some deals at Pawn Shops around Asheville. I was looking over some classic video game console cartridges when my boy came over to me, visually upset. He was very emotional and wrapped his little hands around my arm. He was fighting back tears as he pointed to the music side of the store and muttered, “Your old 12-string is over there and it’s for sale.” Upon inspection, he was right. There is was. My old Alvarez.

Each ding in its wood, every scrape of the glossy exterior, and even the chip of wood missing from the top right corner of the head, had a personal story behind it. That’s why my son recognized it immediately. To him, it was a reminder of days gone by. For me, it was a realization of the emotional cost of surviving those hard times the best way I could.

Until that moment, I never really considered how much that one guitar meant to him. Later that day, while telling my oldest son about the encounter by phone he shared the meaningfulness of that specific guitar to him, as a family heirloom, as well. My girlfriend echoed the same emotions around it too. There was no other option, I had to try and get that guitar back. But I remember hearing one of the clerks say that they had just put it out on the floor that day. There’s no doubt that a guitar like this would sell pretty quickly.

The next morning, I went to the Pawn Shop, hoping,, for hopes sake that it hadn’t sold in the hours since my last visit. Thankfully, it was still there. While I’ve been able to climb back a long way from the financial hardships of a few years ago, I’m still not in a place to drop hundreds of dollars on any one item on a whim. The same clerk was there from the day before and remembered the way my son had reacted to seeing the guitar. He worked out a way for me to pay for the guitar over a series of months and even discounted it to a price that was pretty close to what they paid for it. In a pure human moment, they decided to help make this happen – without profit being the priority.

Fast forward to today, I picked up the Alvarez to bring home to my family. As I was happily making the final payment to pay off the balance, the clerks eyes watered up behind the counter, she knew the story behind it. And make no mistake, it is the family 12-String now. It’s no longer just mine.

As I walked in the door to my apartment, my youngest son was sitting on the couch playing Xbox with a friend. He didn’t know about the guitar coming home. I hadn’t said anything, just in case circumstances changed. I didn’t want him to get his hopes up. I walked in and held the guitar out in front of me, facing him. I didn’t say anything. I wish I had a way to describe the look on his face and the emotion and relief that came over him as he processed what he saw. The shock gave way to smiles, which gave way to a huge wave of grateful emotion.

I try to teach my boys to not put their hearts into material things, but into each other and the love of family and friends. Possessions come and go. But just this once, I realized that the universe saw fit to put this keepsake of memories and emotions back in my family’s hands, in our ears and in our hearts.

I’m looking forward to tuning her up and playing her for a long time to come, and seeing my own kids – and God willing, maybe even their kids someday – figure out their own tunes on this old guitar. Maybe Thomas Wolfe was right, that we can never go home again, but this Alvarez 12-String found a way to. And I’m forever grateful.

Matt Mittan is a long time broadcaster in NC, based out of Asheville. He currently applies his years of experience as a business owner to serve as a Licensed Employee Benefits Adviser to companies large and small across WNC, Eastern TN and the Upstate of SC. You can reach Matt by emailing MattsFishingDiary@gmail.com.