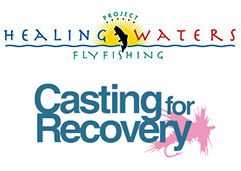 A new book by a retired New York university professor and avid fly fisherman explores the lines and ties between angling for trout and searching for wellness.

Scanlon examines and personally investigates evidence for claims that fly fishing can promote physical recovery, emotional regeneration, and other healthful benefits for individuals afflicted with life-threatening diseases and plagued by debilitating psychological anguish.

Despite some initial incredulity, Scanlon said he’s ultimately concluded that the evidence of fly fishing’s rehabilitative benefits is actually quite compelling. “I was a little skeptical, because a lot of people look at fly fishing as sort of magical and mystical, and I have never been quite certain of all that,” Scanlon said in a phone interview recently. “I’d never really seen that for myself, so I was wondering if this was just going to be another sort of instance of love for the film, ‘A River Runs Through It’ — people thinking that just because you are out fly fishing you are going to get in touch with God maybe.”

However, the more time Scanlon spent with people participating in, running and volunteering for the fly fishing therapy programs — like Casting for Recovery, Project Healing Waters and Fly Rod Warriors — the more he recognized firsthand the undeniably positive results.

Scanlon became convinced not only “that there was something real going on,” but also that “people were changing their lives through fly fishing.” As a result of his research, his own personal experiences, and the valuable new relationships he formed, Scanlon says he’s come to believe wholeheartedly in the curative powers of immersion in nature, and regards the legitimacy of such notions as “settled science.”

“There is very good evidence now, and has been for decades, that just being outdoors is good for us,” he said. “And especially being in specific kinds of places. The evidence seems to be sort of evolutionary, that we have spent a long part of our development as a species in these different locations, and among the ones that are most comfortable is being near moving water.”

“That has been demonstrated over and over again — that people who go into these different places like that, even if it is just walking in a park, they come out of it kind of refreshed, and their minds are cleared and they have a sense of wellbeing.”

But there’s something especially potent for mind, body and spirit offered by fly fishing, said Scanlon. And trout in particular tend often to inhabit places that for humans too offer a “perfect spot” for spawning recoveries of physical and mental health, he said.

“When that’s connected with the benefits of fly fishing, the physical benefits, and the concentration necessary, you really have a source of wellbeing and a kind of therapy,” Scanlon said.

The promise of fly fishing’s physical benefits – the casting motion itself – was actually what led to the foundation of the Casting for Recovery breast cancer therapy program nearly two and a half decades ago.

Two women – former Orvis casting instructor Gwenn Perkins and Dr. Benita Walton, a breast reconstruction surgeon – hatched the idea on a fly fishing outing together in 1996. It occurred to Dr. Walton that breast cancer survivors might benefit greatly not just from the tranquility of spending time on a mountain stream, but from the act of fly fishing itself.

Walton recognized fly casting as a “therapeutic technique” that could aid in recovery “by exercising the soft-muscle tissue damaged by radiation and/or surgery,” according to the Casting for Recovery website. She and Perkins then started tying together ideas for organizing all-expenses-paid weekend fly-fishing retreats where organizers, medical specialists, fly fishing experts and support volunteers could meet with cancer patients for counseling, education, sharing and above all, fishing, in a “retreat setting away from the stresses of home, work, and family.”

The initial Casting for Recovery retreats took place in Vermont in 1998, and CfR programs and have expanded across the country since.

For someone like Charity Rutter, who along with her husband, Ian, runs the Townsend, Tennessee-based R&R Fly Fishing guide service, the truth of claims that immersion in nature can heal is self-evident, and few activities are better to promote that healing than fly fishing – and, in Rutter’s mind, scarcely any place imaginable is better to cast for wild trout than the pure, protected, free-flowing waters of Great Smoky Mountains National Park.

“There is just so much to fly fishing on a mountain stream,” said Rutter, who is among a number of fishing guides in Southern Appalachia who volunteer to introduce breast cancer patients and survivors to catch-and-release trout angling’s rehabilitative potential. “It is good physical activity to be outside, to be out moving. It is just so good for your brain and your body to just slow down and breathe in the fresh air.”

Rutter particularly specializes in teaching women to become more independent outdoor adventurers, and she runs women-only clinics for ladies of all ages and skill levels who are looking to become autonomous angler-explorers.

In Rutter’s experience, women beginners actually tend to develop fly casting proficiency quicker and easier than men. Women often don’t approach fly fishing with erroneous preconceived ideas, unhelpful habits or counterproductive muscle-memory associations that have to be cast aside for effective fly casting. For those reasons, women often enjoy success soon after they step for the first time into a creek with a fly rod in hand, she said.

“Women do tend to pick it up easily,” Rutter said. “A lot of times I kind of relate it to dancing. There just seems to be a lot more women that love to dance than men. There is just a real finesse to flycasting, I think. Not to say that men don’t have that, but I think it is just one of those things that comes very naturally to women.”

Learning a new and enjoyable skill in the face of great personal struggle is one of the aspects of the fly fishing retreats that is so rewarding to breast cancer survivors, said Beverly Booth, a Casting for Recovery program coordinator in North Georgia.

“We always hear from the participants how relaxing it is, and how happy they are to have stepped out of their comfort zone to learn something they thought they would never learn,” said Booth.

In addition to discovering a marvelously empowering new pastime, the women also share camaraderie with others who are in the midst of similar health challenges, or who’ve gone through such struggles themselves. “Probably 70 percent of the participants have never been in a support group,” said Booth. “So they all are getting so much more out of it than learning how to fly fish.”

As for what instills fly fishing with such therapeutic vitality, Booth and Scanlon each say it’s a combination of the committed mental focus required to bring all the moving parts together to actually catch a fish at the same time one is absorbed by irresistibly enthralling surroundings.

The sentiment Scanlon said he’s most often heard repeated is an expression of “the idea of being in the moment.”

“This is true across the board with a great many people who were dealing with a lot in their lives,” he said. “They would describe a sort of mindfulness — sort of like a form of meditation — that just takes you out of yourself. It makes you just pay attention to the moment – you are not worried about the past, and you are not thinking about the future. That was the kind of thing that I heard again and again: They escaped themselves for a couple hours, or even longer, and they felt that escape to be really terrific. They found a way to get away from everything that they were worried about — to be alive to everything that was around them, to be alive to the water. That was a very common reaction to all the people I spoke with.”

The profound rewards and soulful blessings of these trout therapy sessions flow not just to the participants battling terrible disease and enduring chronic psychological distress, but to the organizers and volunteers who lend their expertise to the healing efforts.

“At every retreat, my staff will say, ‘We get more out of this than the participants do,’” said Booth. “It is truly amazing. It is so heartwarming it is hard to describe. It’s just an absolutely fabulous way to give time and energy and money and anything else we can do to make it all work.”

The members of Team USA were deeply moved by the experience, Taylor said, and they spoke later about how humbling and inspiring the experience of fishing alongside the women bravely fighting harrowing odds had been for them. One of the world-class anglers confessed astonishment that a lady he’d fished with all day had seemed oblivious to her terminal diagnosis – and he was amazed how “she never reflected or acted that she was sick.”

As fly fishers, we all dream of making that long, graceful cast to a big brown we have seen sipping bugs off the top of the water,” wrote Thrasher, whose Southern Brookies guide service focuses on Tennessee’s famed Caney Fork and Elk River tailwaters. “Presenting our handcrafted fly in just the right spot with the perfect drift is so rewarding, as we watch the trout rise and gulp down the fly, and then it’s ‘Fish on!’ My heart pounds just thinking about it! However, as rewarding as this is, I have found something that tops it all: Casting for Recovery.”

Volunteering for CfR retreats has given Thrasher a “tremendous sense of fulfillment,” and she encourages anyone to “jump at the opportunity” to either participate or assist in the events.
“You will find out, firsthand, why I believe that the reward and satisfaction that comes with the warm hug from a thankful participant or a volunteer is far greater than netting that big brown,” wrote Thrasher.

Working with Casting for Recovery and other support therapy groups has altered Scanlon’s perceptions not just of the sport of fly angling, but of mortality and the human experience itself.

“For me, writing this book was kind of life changing,” he said. “I met a lot of interesting people, but almost all of them were on the razor’s edge. I was speaking to a lot of people whose lives were turned upside down. So it was very rewarding and it also gave me a sense of my own good fortune. There are many people who have really gone through a lot, and who are really going through a lot. And they found a kind of an anchor in fly fishing.”

Mark Engler is an outdoor writer and photographer whose work regularly appears on the Tennessee River Valley Geotourism website, www.ExploreTRV.com.