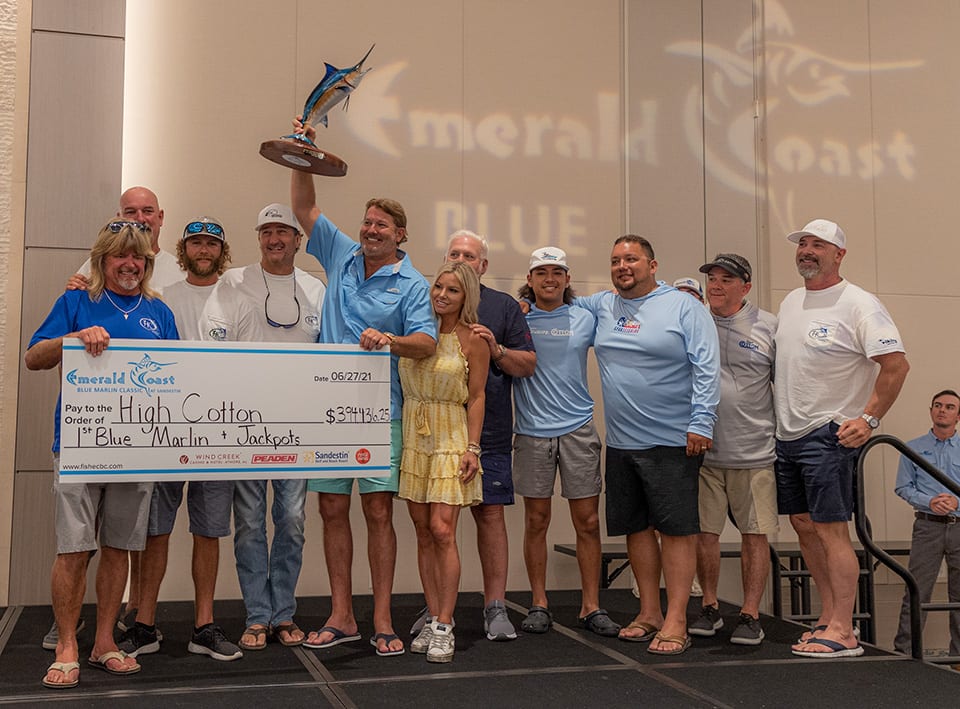 Miramar Beach, Florida –High Cotton, a 92 Viking based in Katy, Texas, got on the board first and never looked back to win the 2021 Emerald Coast Blue Marlin Classic. The team, led by owner Pete Bell, Captain Allan Legge and angler Cliff Mountain, pocketed $394,436 to sweep the top marlin and marlin jackpot categories. High Cotton boated the largest fish of the week, a blue that tipped the scales at 681 pounds. The overall cash prizes in this year’s contest totaled $1.975 million, the second-largest purse in the tournament’s 19-year history. 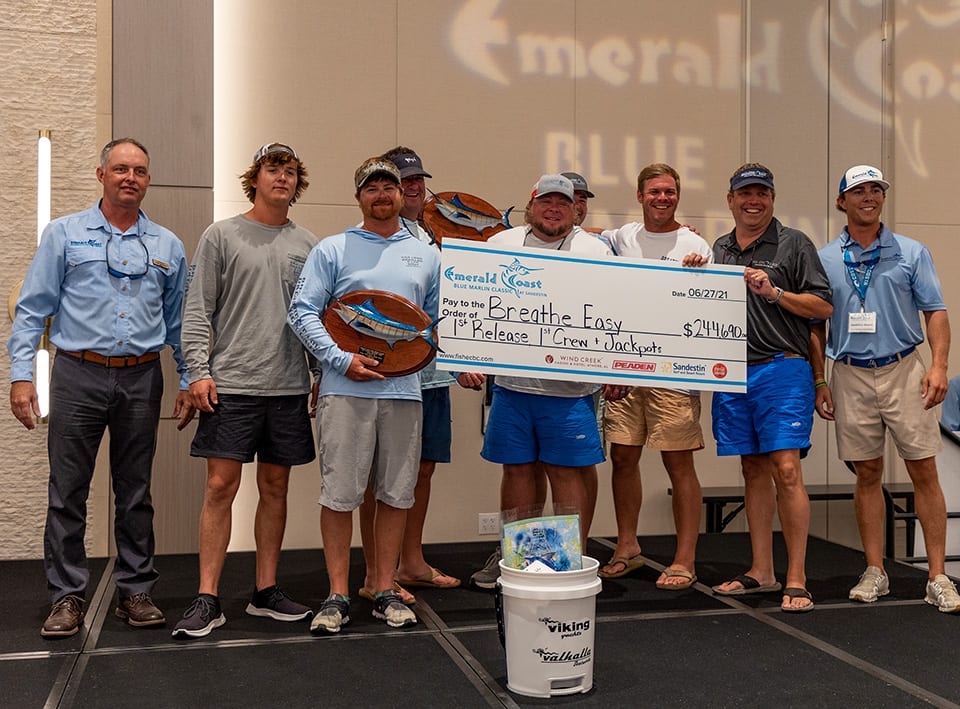 The marlin bite wasn’t exactly on fire this week, but several teams took advantage of their opportunities to rack up impressive release wins. Breathe Easy (72 Viking), with owner Matt McDonald and Capt. Patrick Ivie at the helm, scored four blues to earn top honors and a check for $244,690 after catching and releasing four blue marlin. Breathe Easy is based in Orange Beach, with Chris Brundage, Corey Hurst and Ryan Fields the mates for the top-named crew.

Wynsong, a 66 Viking also hailing from Destin, was the third-place release team with 1,500 points based on time. Capt. Allen Staples, owner Will Wilson and the team were rewarded with $83,665 for their efforts. Several other boats also won prize money based on optional entries.

In the tight tuna contest, Quick Time came out on top based on owner/angler Robert Burroughs 231.3-pound yellowfin, a new ECBC record. The team (Capt. Wilks Hammond) wasn’t in any tuna jackpots, however, so they settled for $28,160. Caroline Robinson, Capt. Devin Potts and the crew on Sea Mixer (66 Spencer/Orange Beach), scored the second-heaviest tuna at 204.3 pounds, good for $53,886. Rounding out the division was Done Pickin’ (56 Viking/Capt. Jordan Hutchinson). Payton Wainwright cranked in the 153.3-pound yellowfin, worth $36,554.

The top wahoo boats included Ramble On (67 Billy Holton/Capt. Shannon Allman) with a striped speedster weighing 79.7 pounds, worth $47,060. David Durden was the angler on that fish. Sam Haley and his crew aboard Skin Deep (63 Ricky Scarborough/Capt. Kyle Smith) won $27,021 for a 74.5-pounder, while Taylor Morrisette on Rascal (65 Hatteras GT/Capt. Nick Milsap) earned $11,264 for 67.6-pounder.

Ronald Thomas and the Bandito team (68 Jim Smith/Capt. Chad Solomon) earned $73,160 for the largest dolphin, weighing 35.9 pounds. William Hackney claimed the other two slots in the dolphin division with fish registering 31.5 and 27.1 pounds. Hackney was fishing on Garfin, a 37 Sea Hunter with Capt. Finley Cook to win $108,867.

The 88-boat fleet combined to catch 36 blue marlin, 17 whites and two sailfish. Three blues were boated for an overall release ratio of 94.5 percent. In the game fish tallies, 30 wahoo were brought in, along with 13 tuna and dolphin apiece.

“It was a great week with some quality fish brought to the scales, including a new ECBC record tuna,” says Tournament Director Jason Draughn. “The weather cooperated and I’d like to thank all 88 teams for fishing with us again. I look forward to celebrating 20 years of the Emerald Coast Blue Marlin Classic on June 22-26, 2022.”