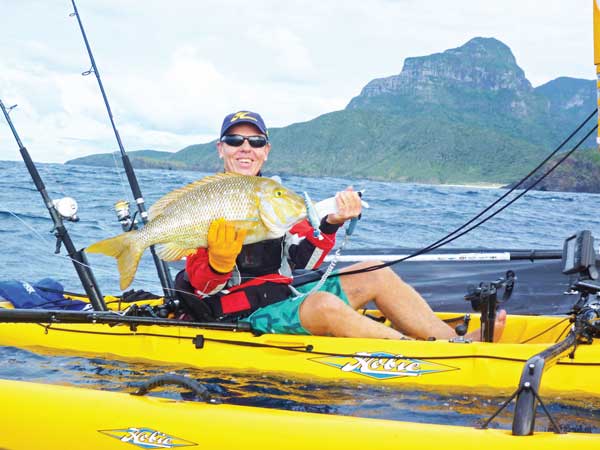 [dropcap]W[/dropcap]hoever said that sailing and hardcore off shore fishing are mutually exclusive sports? Hobie certainly did not. Enter the Hobie Mirage Tandem Island and Mirage Adventure Island. Pedal, paddle or sail them…they are human powered, no motor necessary. marlin, tuna, dorado… off shore pelagic fishing of any kind…the Island’s are a “New Way to Fish” from Hobie. The combination of the MirageDrive® pedal system, rudder, rollerfurling main sail, retracting akas and amas on each side and the hull design ensure a stable and fast ride and enable anglers to cover long distances at trolling speeds. Both boats are proudly made in the U.S.A.

When Hobie Alter built the first Hobie Cat 16 in 1968, little did he envision that the powerful combo of wind and sail would later merge with Hobie’s human-powered MirageDrive® pedal system to create a whole new category of watercraft . Fast forward to 2013. Both forms of power are combined in the Island boats. they provide a demonstrable way to give off shore anglers a glimpse of the propulsion that can be achieved combining the MirageDrive with the power of wind in sails. Add the amas on each side that make it virtually impossible to flip over, built-in rod holders, the ability to troll with lures and large storage capacity on the trampolines to lay out fish and these boats convert into fishing machines.

“I started fishing on the Adventure Island in 2010 and I still remember my maiden voyage. It was my first time sailing and it was magical,” commented Hobie Team Member, Daniel Pham. “the stability is un-matched with any other kayak I have ever been in. It pedaled well in light winds and then I released the sail and I couldn’t believe it. the wind propelled me with no effort on my part. I was sailing and it felt like I was sitting in a big boat.” 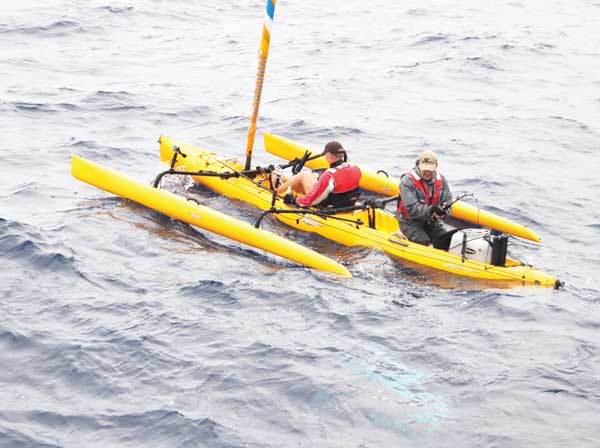 From the Texas oil rigs where Daniel and his friends fish to the Hawaiian Islands, Hobie Island fishing is taking off . “the Hobie Tandem Island is the ULTIMATE fishing machine for Hawaii’s harsh wind and ocean conditions,” commented Hobie team members, Kevin and Gareth Uyeda. the boat’s stability allows us to hunt quality game fish like ono (wahoo), mahi mahi (dorado) and ahi (yellowfi n tuna) in conditions that would otherwise have us scrambling for the shore or sitting on the couch at home. the wind, which at one time was our enemy, is now our friend.”

In Northern California, Chuck Espiritu, yet another team member has seen the popularity of Hobie Island fishing explode, so much so that he and his friends have joined the Hobie Island Club program that puts like-minded Island owners together.” the Hobie Adventure Islands are a game changer for all of us who chase big game fish off the coast of Northern California. It has extended our range and added an extra measure of safety. Most kayak fishermen end their day when the wind comes up. For Hobie Island fishermen, the fun is just beginning.” Since 1950, Hobie has been in the business of shaping a unique lifestyle based around fun, water, and quality products. From their headquarters in Oceanside, California, Hobie Cat Company manufactures, distributes, and markets an impressive collection of eco-sensitive watercraft worldwide. these include an ever-expanding line of recreation and racing sailboats, pedal-driven and paddle sit-on-top recreation and fishing kayaks, inflatable kayaks, fishing boats and stand-up paddleboards plus a complementary array of parts and accessories www.hobiecat.com